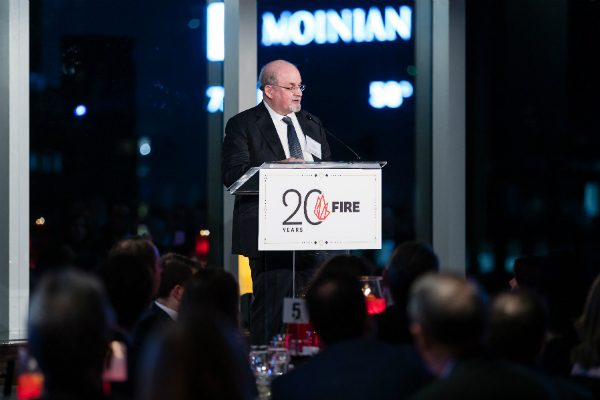 More than 300 of FIRE’s closest allies and supporters gathered on Thursday Oct. 24, at the Mandarin Oriental Hotel in New York City to commemorate FIRE’s 20th anniversary.

During his remarks to the gathering, FIRE co-founder and Board of Directors member Harvey Silverglate noted that he was careful to call the event a “commemoration,” not a “celebration,” for a very particular reason. 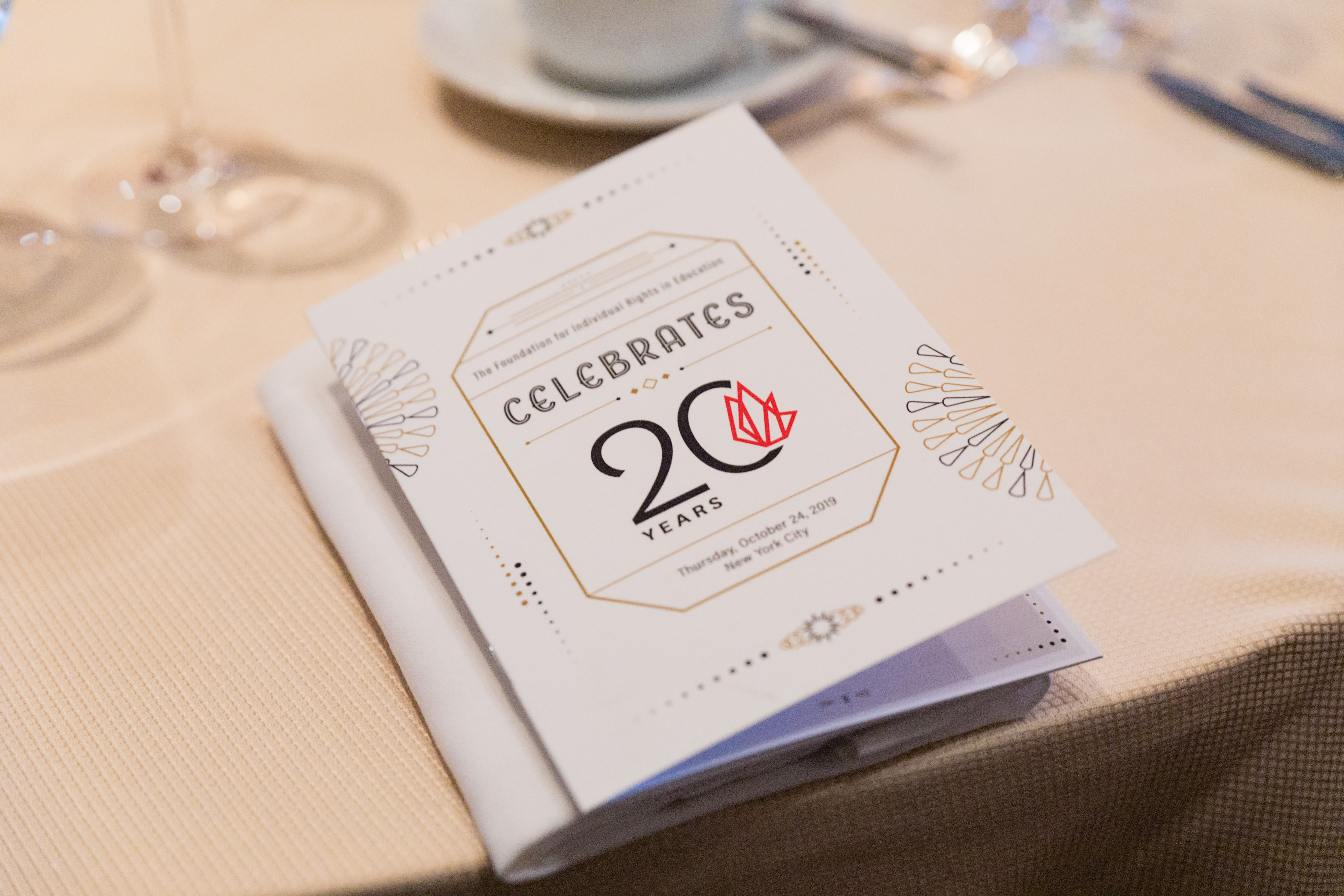 When Harvey co-founded FIRE in 1999 with University of Pennsylvania Professor Alan Charles Kors, he predicted FIRE’s life to be 10 years: “The maximum time, surely, that would be needed to solve the free speech and due process problem on campus.” The violations of student and faculty rights were so absurd, he thought, that once exposed, most would disappear and FIRE’s assistance would no longer be necessary.

Twenty years later, the threats to these core American values are just as acute and pernicious on campuses today as they were in 1999. But that doesn’t mean there haven’t been any successes. On the contrary, there have been many. FIRE has secured over 650 victories at almost 370 different colleges and universities with a combined enrollment of 7,736,934 students. In that sense, the evening was bittersweet: an opportunity to reflect on the victories while reminding ourselves of the challenges that still remain ahead.

The evening began with a keynote address about the importance of free expression from famed author Sir Salman Rushdie, an artist whose 1988 novel, “The Satanic Verses,” put a bounty on his head and sent him into hiding for years. He was introduced by Jonathan Rauch, author of the 1993 book “Kindly Inquisitors: The New Attacks on Free Thought,” which Rauch quit his job to write after being dismayed by the West’s tepid defense of Rushdie. 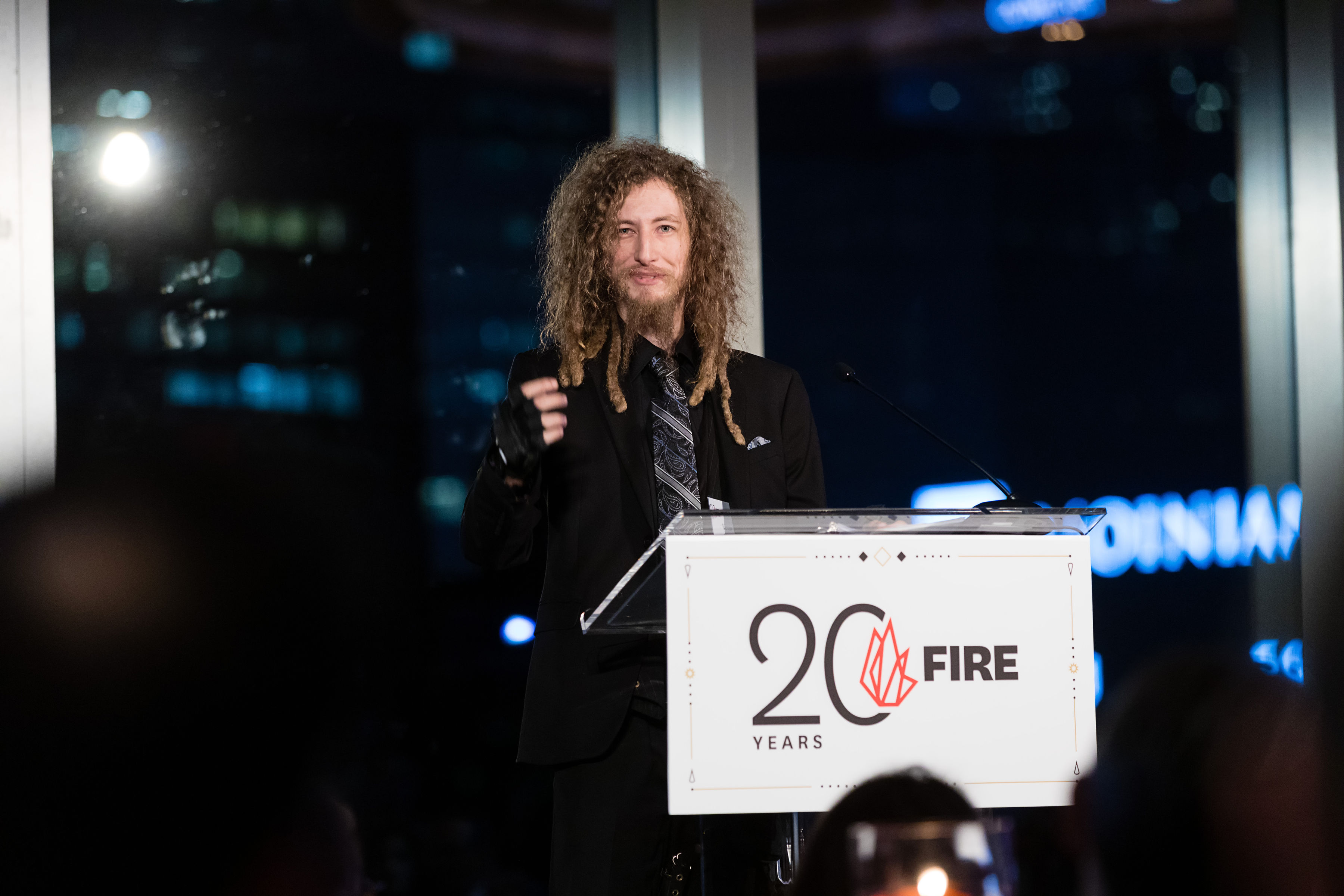 Kevin Shaw sued his college with the help of FIRE after being told he couldn’t distribute copies of the U.S. Constitution outside a tiny free speech zone.

“Before the ‘thing’ happened to ‘The Satanic Verses,’ I was always kind of in favor of free speech but I’d never really thought there was any point in making a big fuss about it,” said Rushdie. “[W]hy would you make a fuss about the importance of having air to breathe if you have air to breathe? What happened to me back in 1989 was the sudden feeling that somebody was trying to turn off the air supply.”

Of the situation for free speech on campus, Rushdie, a college instructor himself, said, “the only safe space that is needed at university is the space in which all ideas can be discussed, because if you can’t do that, then there is no such thing as a university.”

In the foyer outside the event, a large timeline illustrated major events in FIRE’s history. Later in the evening, the timeline was brought to life with short speeches by a handful of students, faculty members, parents, and lawmakers who FIRE assisted over the years.

Brooklyn College professor KC Johnson kicked it off by discussing his 2001 case involving his college’s efforts to fire him for not being sufficiently “collegial.” FIRE helped him and, ultimately, he ended up getting tenure. But, he quipped, since then, he’s been “something of a regular customer of FIRE.” 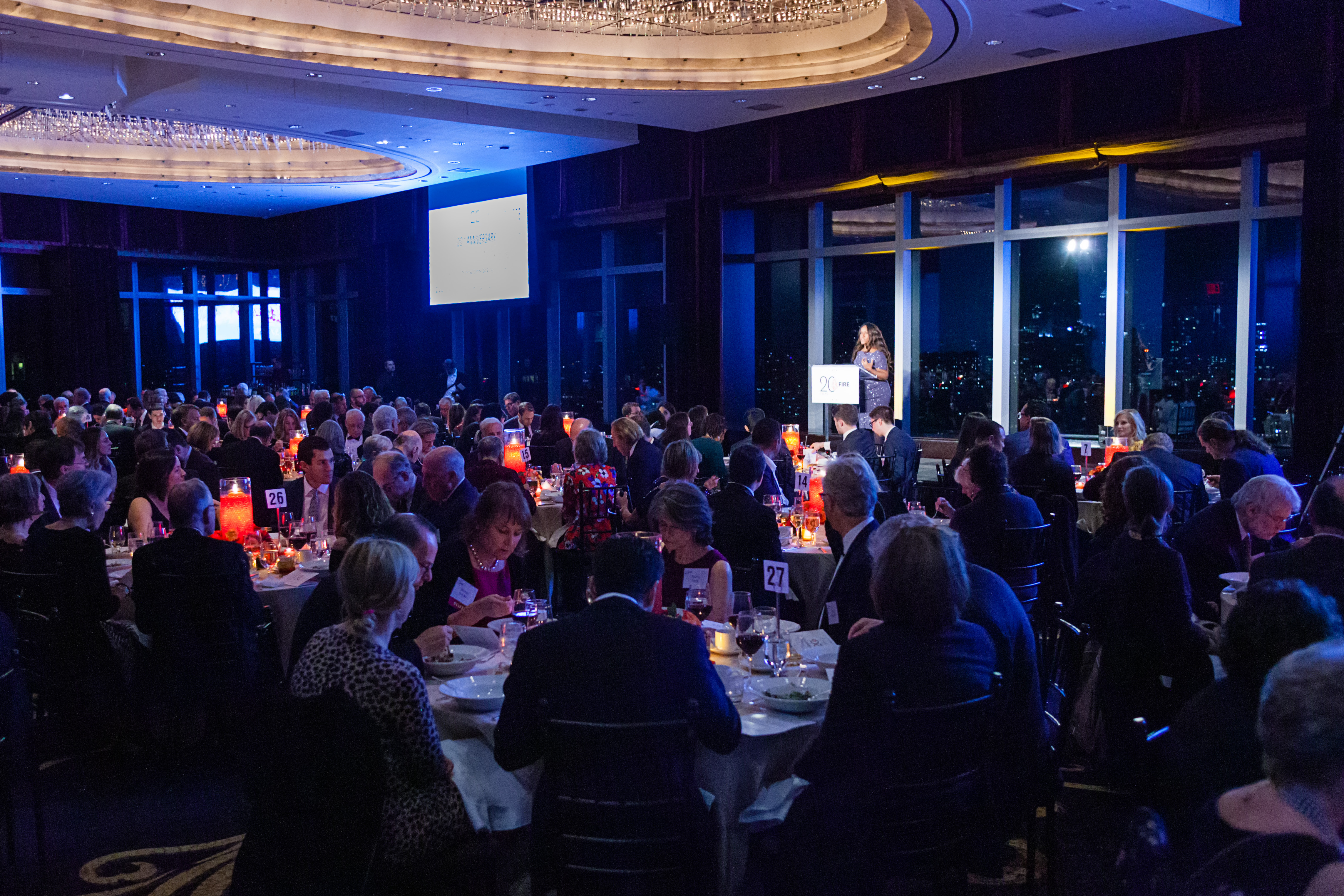 When it was former Congressman and House Judiciary Chairman Bob Goodlatte’s turn to speak, he described FIRE as “one of those rare organizations that truly understands just how critical it is to work with people across party lines — and keep the conversation going.” FIRE worked with Chairman Goodlatte in 2015 to help reform speech codes on public college campuses. He wrote a letter to 250 colleges that maintained a “red light” rating in FIRE’s Spotlight database and his committee even invited FIRE President and CEO Greg Lukianoff to testify on Capitol Hill.

Attendees also heard from some of the students FIRE represented as part of its Stand Up For Speech Litigation Project, including Pierce College student Kevin Shaw, who, in 2016, sued his college with the help of FIRE after the college told him he couldn’t hand out copies of the U.S. Constitution outside the campus’ free speech zone.

“Thanks to FIRE,” he said, “the entire campus of Pierce College, and all the other campuses in the Los Angeles Community College District, are now ‘free speech zones.’” 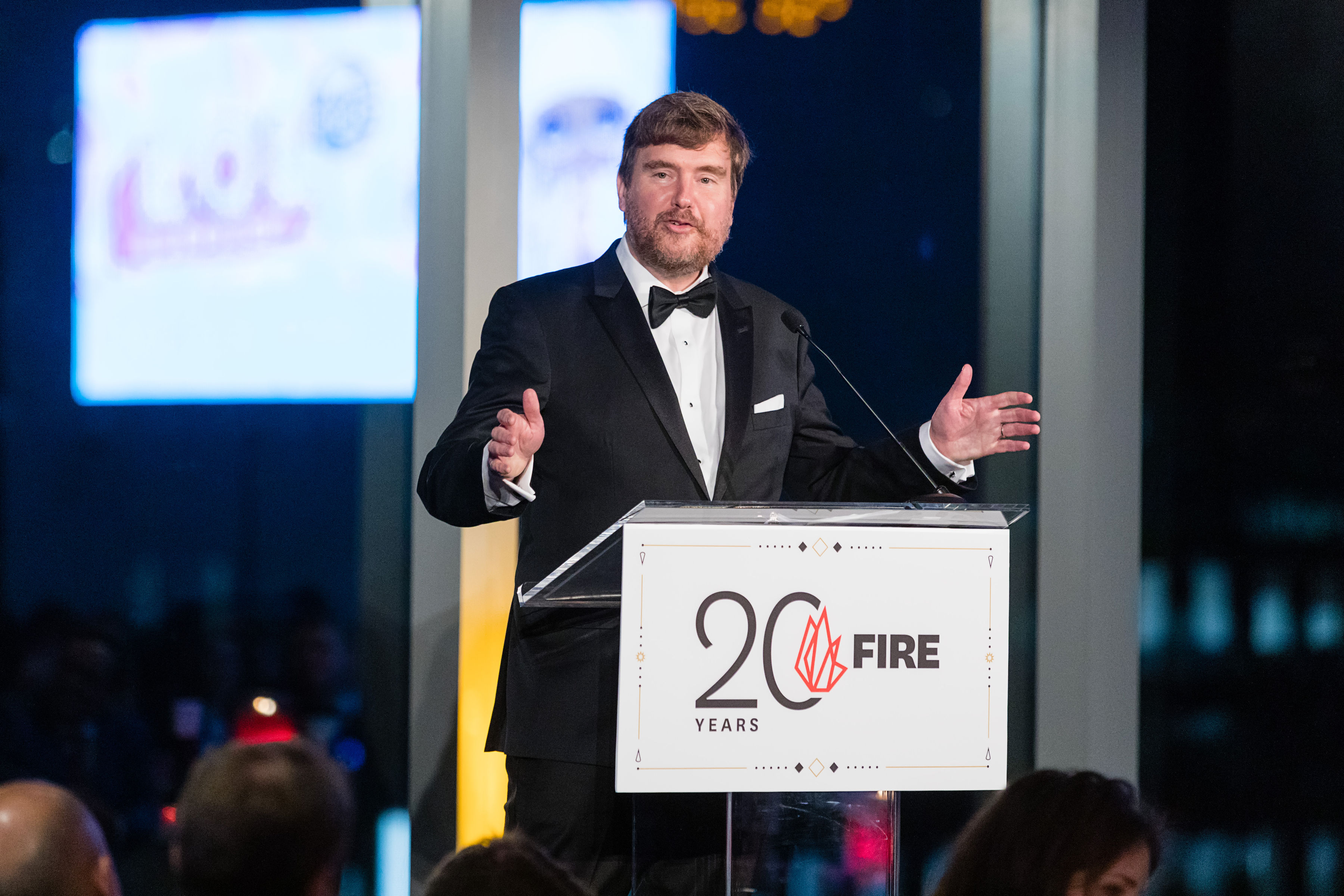 FIRE’s two longest-serving employees, Greg and Executive Director Robert Shibley, rounded out the evening by addressing the challenges that remain ahead. “While FIRE has made amazing progress …. the censors’ ambitions have grown,” said Robert. “Having flexed their muscles in the world of academia, they have begun to squeeze our society in the same way.” This is why advocates for free expression need to inculcate and defend “a culture of free speech,” said Greg. After all, to echo Alan Charles Kors, “A nation that does not educate in liberty will not long preserve it and will not even know when it is lost.”

FIRE would like to thank all our supporters who made these past 20 years possible. Here’s to the next 20 years — and making good on Harvey’s goal of putting ourselves out of business by winning the battle for free speech and due process on campus once and for all.

Were you at the event? Or just want to see more? Check out FIRE’s Facebook album documenting all the fun!