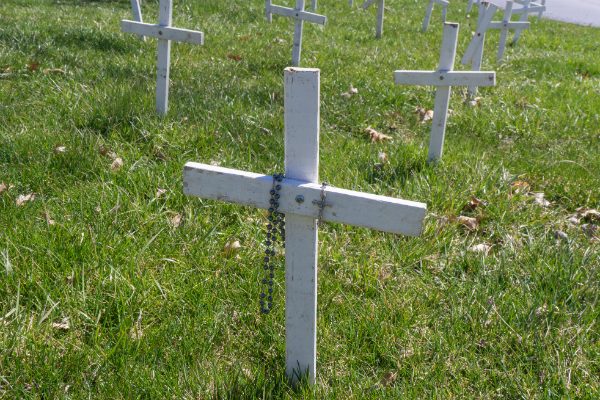 Have you or someone you love been confronted by small, shin-high wooden crosses, preventing you from attending college classes? Malevolent gangs of tiny, unattended wood religious symbols that force you to engage in controversial discussions, or even prevent you from having a meaningful conversation on important issues?

No, of course you haven’t. Because that’s not possible.

But someone needs to tell Rocky Mountain College, and we’re hoping you’ll help us do it.

On Monday, FIRE wrote to RMC, a Christian college in Billings, Montana, calling on the college to permit its students to engage in displays it has censored as “divisive,” such as placing Christian crosses along a walkway as part of a pro-life display.

This year and last, RMC permitted the campus chapter of Young Americans for Freedom to display small American flags along campus walkways near the Student Union Building as a 9/11 memorial. In August, YAF contacted Dean of Students Brad Nason to request permission to “get some crosses to put in the ground (like we do with the flags for 9/11) to act as memorial for abortion victims.”

Nason rejected the display, writing that the college “draws the line at public displays of divisive topics.” He further explained the college recently rejected a campaign “that would have included what most would interpret as liberal messaging” on topics such as immigrant rights because that display would have been “unnecessarily and inappropriately confrontational.” Instead, Nason said that topics such as abortion require “open and thoughtful discussion.”

But in September, when YAF student leaders tried to have that open and thoughtful discussion — they put up posters with a meeting time and the slogan “Unborn Lives Matter.” — Nason rejected those posters, too.

The posters distributed by YAF leaders.

RMC describes itself as a “community of scholars in which the ideals of freedom of inquiry, freedom of thought, freedom of expression, and freedom of the individual are sustained.” These are beautiful goals, beautifully expressed. But an institution’s commitment to its ideals can only be measured when those ideals are tested — and at present, it’s a test RMC is failing.

As implemented, RMC’s policy seems to actually just permit freedom to express things that the administration happens to find noncontroversial. But what is controversial (or not) is in the eye of the beholder: The American flag (which RMC approved for the 9/11 display) has, at times, been viewed as controversial. So have religious symbols. Naming a school after George Washington — which, throughout most of American history, would have been viewed as the least controversial name possible — has proved controversial to some.

As a private institution, RMC can choose whether to be a “community of scholars” that sustains “freedom of expression.” It chose to do so, and having made that choice, it has an obligation to fulfill its promises to its students. And crosses and posters, whether or not someone might find them controversial, are not “confrontational” in some way that separates them from other forms of speech. They’re just symbols representing a point of view, and RMC students should have the right to use them, just like anyone else.

We hope you’ll take action with us and encourage Rocky Mountain College to show the courage of its convictions by permitting students to engage in displays on matters of potential controversy.

When we hear more, we’ll let you know.