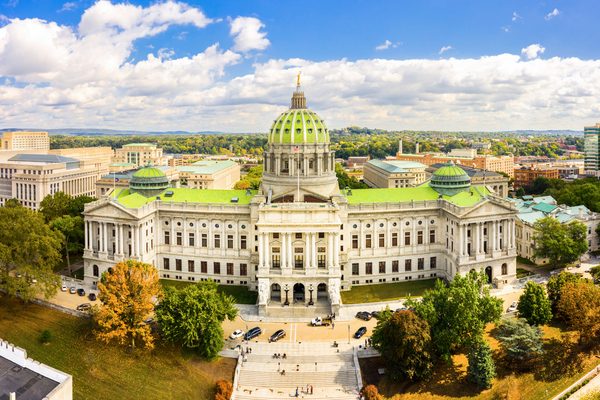 Legislation currently proposed in Pennsylvania, HB 1489, would require all public and private institutions of higher education and private technical schools in the state to adopt and incorporate into their codes of conduct the bill’s definition of affirmative consent.

As FIRE has previously explained, the affirmative consent standard shifts the burden of proof from the institution that will mete out punishment, such as a court or university, and onto the accused, such as a criminal defendant or accused student, by requiring them to demonstrate their own innocence. This inappropriate burden-shifting violates the presumption of innocence and is sufficient justification for the Pennsylvania legislature to reject HB 1489.

According to HB 1489, “[e]ach institution of higher education and private licensed school shall adopt the definition of affirmative consent” that the bill provides:

HB 1489 goes on to state that “[i]t is the responsibility of each individual who wants to engage in sexual activity with another individual to obtain affirmative consent from the other individual.”

The term “presumption of innocence” means what it sounds like: that someone accused of misconduct is presumed innocent.

These provisions turn the presumption of innocence on its head. The term “presumption of innocence” means what it sounds like: that someone accused of misconduct is presumed innocent. It is why an accused individual can win his or her case by remaining silent; our legal system understands that proving a negative can be extremely difficult.

This presumption is a good thing. Think, for instance, of the number of people who routinely spend their nights alone in an apartment. If they were to be presumed guilty of a nighttime crime, how often would they ever be able to produce an alibi? So, if the relevant “prosecuting” institution, whether a court or an institution like a college, cannot successfully demonstrate guilt, the presumption of innocence has not been overcome and the accused cannot be punished.

In the case of physical sexual misconduct, whether or not an act is unlawful or prohibited generally turns on a lack of consent. Applying the presumption of innocence to sexual misconduct cases means the accused will be presumed not to have violated consent.

In contrast, affirmative consent requires a student, once accused, to demonstrate to the satisfaction of the tribunal that they proceeded with consent, rather than requiring an institution to demonstrate that the interaction was nonconsensual. On this point, analysis by public defender, law professor, and affirmative consent critic Tamara Rice Lave is worth revisiting:

When I was a public defender, I used to always remind jurors that because the [burden of proof] was on the prosecutor, I could literally say nothing, and still, if the D.A. didn’t prove the case beyond a reasonable doubt, they would have to acquit. But with affirmative consent, the accused must put on evidence. If the university proves by a preponderance of the evidence that a sex act happened, the student has violated the university code of conduct unless he can convince the fact finder that the complainant consented. [Emphasis in original.]

Professor Rice Lave’s critique is not fringe speculation. As FIRE has noted, the American Law Institute overwhelmingly voted against including affirmative consent in its Model Penal Code, which serves as the basis for many enacted state criminal codes, for the same reason. Less than a week before the vote on the measure, a large number of ALI members wrote a critique urging the institute to reject affirmative consent. They argued:

Whether it is a burden of going forward, a burden of proof, a burden to establish an affirmative defense or something else, the defendant has been burdened to disprove guilt[.]

ALI’s critique is also supported by an opinion from a court in Tennessee that emphasized the impracticality of such a standard. When overturning the University of Tennessee at Chattanooga’s decision to expel a student for sexual misconduct while employing an affirmative consent standard, the court stated:

[The accused] must come forward with proof of an affirmative verbal response that is credible in an environment in which there are seldom, if any, witnesses to an activity which requires exposing each party’s most private body parts. Absent the tape recording of a verbal consent or other independent means to demonstrate that consent was given, the ability of an accused to prove the complaining party’s consent strains credulity and is illusory.

HB 1489 violates the presumption of innocence in another way. The bill would not only make it so that an accused student “has been burdened to disprove guilt,” as the ALI member letter-writers phrased it, but would also require that a person accused of sexual misconduct demonstrate that he or she had “clear permission” to engage in the sexual activity at issue.

HB 1489 fatally undermines campus disciplinary proceedings that are fair to all parties.

However, the presumption of innocence requires that any ambiguity be resolved in favor of the accused, like when it is unclear if permission was granted. So, the requirement that the accused demonstrate they received “clear” permission makes it even harder for them to prove their innocence. This further contravention of the presumption of innocence provides another justification for legislators to vote against HB 1489.

In addition to the suspect way the bill defines consent, the legislation includes another provision that could undermine credible campus proceedings that protect the rights of all parties. The bill requires institutions of higher education to work with “at least one rape crisis center and one domestic violence program” when developing the institution’s sexual misconduct “policies, programming and training.”

As FIRE recently remarked on a bill pending in the Maine legislature, these kinds of organizations valuably serve the interests of complainants. However, when it comes to the formation of disciplinary policies, procedures, or trainings, this legislation fails to balance their input by also requiring an institution of higher education to work with organizations likely to represent the interests of a respondent, such as a state public defender or civil liberties group. So, this provision invites bias into campus disciplinary procedures at their formation.

As it stands, HB 1489 fatally undermines campus disciplinary proceedings that are fair to all parties. The Pennsylvania legislature should reject the bill, absent important revisions.