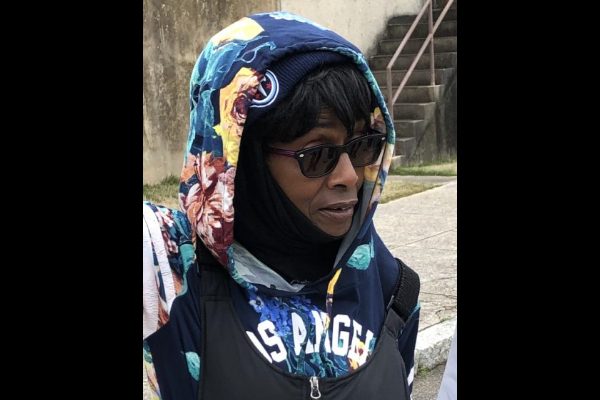 I don’t see no time in the future that I would give up this protest unless something changes at the Lorraine Motel and by that I mean that it’s converted into a facility to help the poor and take care of the people King cared for. Until that day I’m going to continue to be here.

When you think of dissent in America beyond what lingers in lifeless casebooks, when you think of what dissidents do with their First Amendment freedoms, think of the woman who holds court (replete with a sofa and banners) at the corner of Butler and Mulberry Streets in Memphis, Tenn. Clad in dark clothes, sunglasses, and a purple scarf, this street protestor has weathered her post from dawn to dusk for more than 32 years (just under 12,000 days). That tops the record of John Wojnowski, an anti-pedophile activist, who spent 20 years (7,300+ days) protesting outside the Apostolic Nunciature in Washington, D.C. 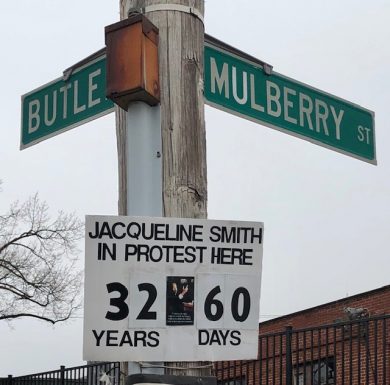 Her name is Jacqueline Smith and you’ll find her across the street from the Lorraine Motel where Dr. Martin Luther King was murdered on April 4, 1968. Ms. Smith worked at the motel for $10 a day and also lived there for 11 years. She was its last resident. In 1988, she was evicted by order of the state of Tennessee.

“You people are making a mistake,” Smith said while sobbing. “If I can’t live at The Lorraine, I’ll camp out on the sidewalk out front.” And she has held true to that promise (she carries a tattered copy of Dr. King’s “A Testament of Hope”) while at the same time protesting across from the Lorraine, now part of the National Civil Rights Museum.

Smith argues that the money, to be chipped in by the state, the city and the county, would be better spent to house and educate the poor. She also believes that the museum will hasten the gentrification of the neighborhood, a quiet, desolate area of shoddy homes and old brick warehouses half-a-mile from downtown. 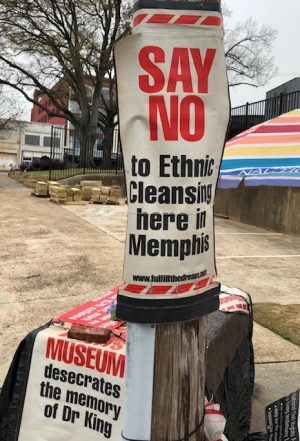 We know Dr. King came to Memphis in April 1968 to support the sanitation workers, so I think it’s fair to say that Dr. King would be bitterly disappointed to see that nothing’s changed for the disadvantaged and underprivileged of our community.” And then she added: “Let’s be honest. We don’t need black-tie functions, limousines and ball gowns at the Lorraine. We need to demonstrate that we can live up to Dr. King’s memory.

That’s why I have protested continually for over 30 years outside the Lorraine. I was evicted as the last tenant of the Lorraine Motel in early 1988. I made a decision there and then that the Lorraine should be a beacon to the highest standards of selflessness, and that I would do all I can do to make the Lorraine a lasting testament to the aspirations of Dr. King.

Is Smith a crackpot? Some may think so. Is she speaking truth to power? Others think so. Would Dr. King have sided with her message? Probably. Yet whatever one makes of Jacqueline Smith, know this: She is a living testament to free speech in America, which is always a good sign in a democracy wed to the First Amendment. Long may she protest!

The culture of free speech, the reality of the First Amendment, cannot be confined to the rarified realm of the “marketplace of ideas” or to what is buried in legal theories or quartered in judicial doctrines. Rather, that freedom finds its most robust moments in the streets where people march and assemble. Harry Kalven was mindful of that when he wrote “The Negro and the First Amendment” (1965). As Abner Mikva (then a state legislator) put it 55 years ago:

Professor Kalven’s book will quite likely serve long after the fact as one of the prime sources on the impact of the civil rights movement on our law. . . . Professor Kalven has bottled and diagnosed the unique thrust of the civil rights cases. The context in which the questions were raised does make a difference in the Court’s decisions. [Kalven’s book] . . . presents a marvelous documentary on the resiliency of the first amendment. 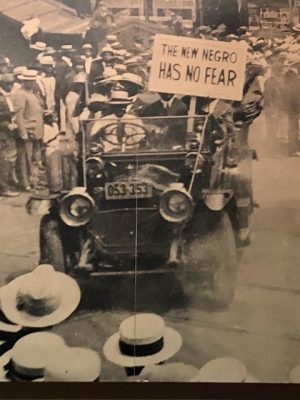 I was reminded of this obvious, though, easily overlooked point during a recent visit to the National Civil Rights Museum at the Lorraine Motel. It was there that I took notice of a moving moment captured in the photograph on the right. Maybe someday someone will come along and collect a variety of such photographs (replete with some historical discussion) in book form in order to give vibrant expression to what it means to live and speak freely (see, e.g., here).

The case is Waggy v. United States. The issue raised in the case is whether “a statute that prohibits telephone harassment may, consistent with the First Amendment, prohibit speech on matters of public concern or impose content-based restrictions on speech.”

In his cert. petition on behalf of the Petitioner, Neal Katyal argues:

The federal government and 43 States have enacted laws that criminalize telephone harassment. Some of these statutes apply only to calls that lack any legitimate purpose or that contain speech traditionally outside the protection of the First Amendment, such as true threats or obscenity. But some telephone harassment statutes apply even when the caller is speaking to a government official on a matter of public concern, or criminalize speech where the caller uses particular “words” or “language” deemed offensive. E.g. Wash. Rev. Code § 9.61.230(1)(a). Circuits and state high courts are deeply divided, 10-8, on whether such broadly written or content- based telephone harassment laws comply with the First Amendment.

The case is Fleck v. Wetch. The two issues raised in it according to SCOTUSBlog were:

(1) Whether laws mandating membership in a state bar association are subject to the same ‘exacting’ First Amendment scrutiny that the Supreme Court prescribed for mandatory public-sector union fees in Janus v. American Federation of State, County, and Municipal Employees, Council 31; and (2) whether it violates the First Amendment to presume that an attorney is willing to pay for a bar association’s ‘non-chargeable’ political and ideological speech, unless and until that attorney takes steps to opt out.

This from a Knight First Amendment Institute press release:

U.S. Senator Ron Wyden and Representative Ro Khanna today introduced legislation to reform the Espionage Act. The bill would narrow the Act to prevent the government from prosecuting journalists merely for obtaining or publishing classified information.

The following response can be attributed to Alex Abdo, Litigation Director at the Knight First Amendment Institute at Columbia University.

In April of last year, the U.S. Department of Justice indicted WikiLeaks founder Julian Assange under the Espionage Act for his role in publishing classified documents in 2010. The indictment characterizes routine journalistic activities as “part of” a criminal conspiracy.