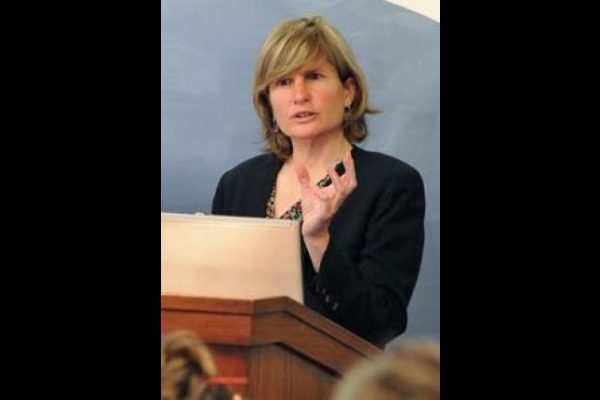 The following FAN entry is a review by David L. Hudson, Jr. of Professor Helen Norton’s “The Government’s Speech and the Constitution” (Cambridge University Press, 2019).

[A] key thesis of my book is that the government’s speech carries unusual power for both value and harm precisely because of its governmental source. . . . ‘The government is unique among speakers because of its coercive power as sovereign, its considerable resources, its privileged access to key information, and its wide variety of speaking roles as policymaker, commander-in-chief, employer, educator, health care provider, property owner, and more.’

In the beginning, there was “When Governments Speak: Toward a Theory of Government Expression and the First Amendment” by Professor Mark Yudof. The year after that seminal article appeared in the Texas Law Review (1979), Professor Steven Shiffrin wrote an important 90-page sequel in the UCLA Law Review titled “Government Speech.” Three years later Professor Udof published a book entitled “When Government Speaks: Politics, Law, and Government Expression in America” (1983), which was reviewed by Professor Shiffrin in the Harvard Law Review. Unquestionably, Yudof and Shiffrin set the stage for what would, in time, become an important addition to First Amendment jurisprudence and scholarship. 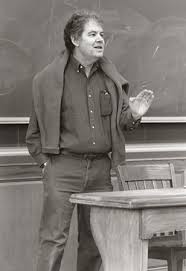 Prof. Steven Shiffrin (credit: Cornell Law School)
The arc of the government speech question was presciently sketched by Professor Shiffrin in four points, among others, he made in his 1980 UCLA Law Review article: (1) “there are limits of content and structure that need to be placed on government speech”; (2) “Government speech relating to ballot questions raises serious first amendment problems, and general rules need to be formulated that limit government departures from electoral neutrality”; (3) “The establishment clause applies only to religion, but if government’s activities as non-religious speaker were entirely beyond first amendment control, major and unacceptable incursions on liberty and equality would be effected”; and (4) “At the same time, it must be recognized that the government interest in communicating is often formidable and arises in different ways in widely various contexts.”

Those issues remain points of legal contention both in courts and in scholarly writings. Thankfully, there is a major new addition to the literature that speaks to those issues and others.

Since the early Udof-Shiffrin years, the government speech doctrine has become one of the most pressing and important topics in modern First Amendment law. It can be seen through litigation over President Trump’s blocking of critics from the comment section of his Twitter feed as well as controversies over specialty license plates, displays of artwork on government property, and federal trademark registration. The debate surrounding the doctrine persists while earlier judicial treatments of the matter likewise remain controversial. 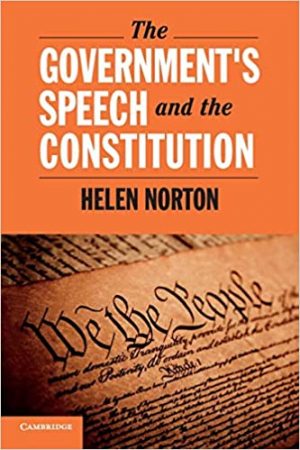 Against that backdrop, one of the nation’s foremost authorities on the government speech doctrine — University of Colorado law professor Helen Norton — delivers a new scholarly and accessible examination of the subject in a book titled “The Government’s Speech and the Constitution.”

Professor Alexander Tsesis, the series editor, wisely selected Professor Norton to do this volume of the Cambridge University Press series on constitutional rights and constitutional liberties. Norton has authored no fewer than a dozen law review articles on government speech since her initial foray into the subject — “Not for Attribution: Government’s Interest in Protecting the Integrity of Its Own Expression” U.C. Davis Law Review (2004). With this book, her thoughts came full circle. Of the book, Professor Geoffrey Stone has said: “Helen Norton offers the most comprehensive, thoughtful, and insightful analysis of the constitutionality of government speech ever written.”

→ Over at Balkinization they recently hosted a symposium on Norton’s book.

→ Last December, Professor Norton delivered the 45th Annual Austin W. Scott, Jr. Lecture at the University of Colorado where she spoke on her new book.

“Because the government’s speech has changed the world for better and for worse, it deserves our attention, at times our appreciation, and at times our concern,” she writes in the work’s introduction. As she explains, “[T]he government itself must speak if it is to govern.” She has recently noted:

Indeed, the government’s speech in its role as health care provider at the federal, state, and local levels is hugely important in informing us about public health crises. Its speech in this capacity is sometimes heroic. Recall, for example, the Surgeon General’s paradigm-shifting 1964 report on the dangers of cigarettes. Recall too that office’s 1986 report on AIDS, in which Surgeon General C. Everett Koop rejected efforts to divide and demonize . . .

The government-speech doctrine is relatively new, and correspondingly imprecise.

Four-plus decades after the Yudof-Shiffrin forays, Professor Norton and her new book arrive on the scholarly stage; in it, she concentrates the bulk of her analysis on nine issues.

1: Norton begins by focusing on what she terms “first-stage” government speech problems — determining whether the government is speaking itself or whether the government is censoring private speech based on viewpoint or content. In that regard, she urges what she calls “the transparency principle” — i.e., that the government’s message or source of its message be transparent to the public. Some of these first-stage issues, however, can be quite tricky. Take the Supreme Court’s decision in Walker v. Sons of Confederate Veterans (2015). In that case, the Texas Department of Motor Vehicles’ refused to issue a specialty license plate sponsored by the Sons of Confederate Veterans — a plate adorned with the Confederate flag. The state of Texas, believing it to be a symbol of hate, or at least quite offensive to many, declined to issue the plate.

“Indeed, a person who displays a message on a Texas license plate likely intends to convey to the public that the State has endorsed that message,” wrote Justice Stephen Breyer for the majority. “If not, the individual could simply display the message in question in larger letters on a bumper sticker right next to the plate.”

The majority’s decision inspired a passionate dissent from Justice Samuel A. Alito, Jr. who wrote: “As you sat there watching these plates speed by, would you really think that the sentiments reflected in these specialty plates are the views of the State of Texas and not those of the owners of the cars?” Alito warned that the majority’s decision “takes a large and painful bite out of the First Amendment.”

Norton acknowledges Walker was a “hard case” but ultimately that it was “correctly decided.” Of course, this conclusion may not accord with the views of some First Amendment lawyers and scholars (see, e.g., ACLU amicus brief & Cato amicus brief).

2: Another complex issue is the application of the government speech doctrine in cases involving newer expressive technologies, she argues, such as when government officials block critics from their social media accounts. There is, for example, the high profile case involving President Donald Trump and his famous — or infamous — use of Twitter and his exclusion of some critics from commenting on his Twitter feed. In the ensuing litigation, Trump’s lawyers argued that Trump’s Twitter communications were a form of government speech. The Second Circuit in Knight First Amendment Institute v. Trump agreed with a lower court that the interactive space associated with Trump’s Twitter account (“@realDonaldTrump”) is a designated public forum and that blocking individuals because of their political expression constitutes viewpoint discrimination.

Norton explains that if President Trump is speaking in his governmental capacity, then he has the ability and power under the government speech doctrine to engage in that speech and control its content free from the constraints of the free speech clause. But, she warns: “[O]nce he chooses to engage in governmental speech through a platform that permits the public to comment on his posts, then he has enabled a forum for nongovernmental parties’ expression in which he may not restrict their expression based on viewpoint.” The doctrine, on the one hand, “empowers the government to speak to us, including through new expressive technologies,” while on the other hand, it denies the government the “power to throttle dissent.”

3: She also tackles another one of the Supreme Court’s controversial First Amendment decisions, Garcetti v Ceballos (2006). In Garcetti, the Court created a categorical rule that public employees have no First Amendment protection when they engage in official, job-duty speech. “The Garcetti rule permits the government to control public employees’ expression by characterizing such speech as the government’s own . . . regardless of that expression’s value to the public interest,” she writes. The rule often thwarts “the public’s interest in government transparency” by silencing those who are in the best position to inform the public about governmental abuses.

5: Norton next focuses her analytical sights on the government speech doctrine and equality. In that respect, she asks: When does “the government’s speech violate the Equal Protection Clause, which forbids the government from ‘deny[ing] any person within its jurisdiction the equal protection of the laws’?” She documents that at times through history the governments’ expressive choices have undercut fundamental principles of equality — whether through “wartime fearmongering speech”, the promotion of homophobic speech, or other exclusionary messages. She concludes that “[t]he government’s speech violates the Equal Protection Clause when it results in certain discriminatory effects, but some will be quicker than others to find these effects.”

6, 7 & 8: In later chapters, Norton turns to other important issues such as (i) how the government speech doctrine interacts with due process principles, (ii) possible free speech and free press constraints on the government as a speaker, and (iii) “what we might do about the government’s destructive expressive choices.”

9: The final chapter on possible approaches to stopping harmful government speech is particularly intriguing. “Rather than provide an exhaustive treatise on remedies, my purpose here is simply to flag an extensive body of precedent that identifies the constitutional remedies available to stop or redress the government’s speech that violates specific constitutional protections.”

Three years ago, Professor Clay Calvert, writing in the William and Mary Bill of Rights Journal, observed that “[a]t present, the metaphorical thumb that is government speech now presses down heavily in favor of censorship on the scales of justice that balance government interests with those of free expression.” Perhaps the ruling in Matal v. Tam (2017), the trademark registration case, signals a willingness on the part of the Roberts Court to afford greater attention to the potential abuses of the government speech doctrine.

This term, the Court may well consider doing just that in a case currently pending before it, Waronker v. Hempstead Union Free School District. The issues in that case are:

In his cert. petition for the Petitioner, Dean Erwin Chemerinsky argues: “The case thus presents the opportunity for this Court to give much-needed guidance to lower courts, as well as to government employers and government employees, about the First Amendment’s protection of freedom of speech.” Indeed, and should the Court avail itself of that opportunity, the Justices (and counsel) would be well advised to consult a work that could shed much-needed light on the subject, Professor Norton’s “The Government’s Speech and the Constitution” — the work that Professor Sonja West aptly described as “an enormous contribution to our understanding of an often mysterious topic.”