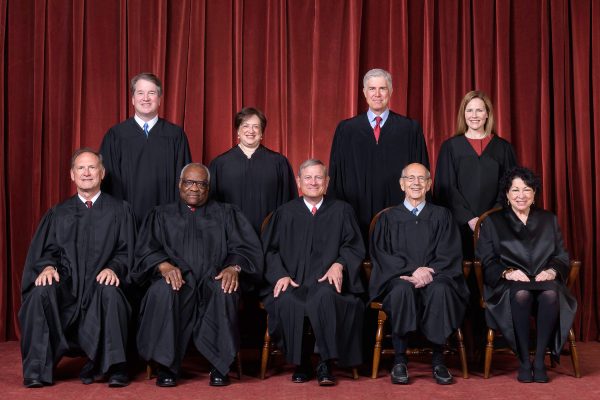 The 2020-21 Supreme Court term was another notable one in the history of the Roberts Court and its free expression jurisprudence. Here are some highlights of the term: 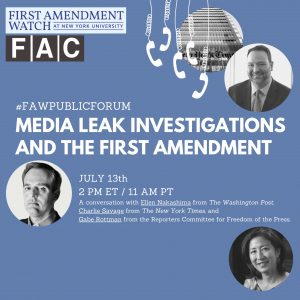 In early June, reports emerged that, under the Trump administration, the Justice Department seized the phone and email records of several reporters. The record seizures did not contain the content of the messages, but showed who contacted whom and when. None of the reporters who were targeted knew that the government had taken their information, let alone why. Those that knew about the record seizures were forced to stay silent due to a court gag order. Unable to find the information it was looking for, the Justice Department abandoned its mission and announced that it plans to change its policies governing media leak investigations.

Join First Amendment Watch and First Amendment Coalition on July 13th at 2 pm EST for a FAW Public Forum conversation with Ellen Nakashima a reporter for The Washington Post, Charlie Savage a reporter for The New York Times, and  Gabe Rottman, director of the Technology and Press Freedom Project at the Reporters Committee for Freedom of the Press. We will discuss the history of media leak investigations, the Espionage Act, First Amendment protections for confidential sources, and current efforts to tighten policies regarding when and how federal investigators can seize journalists’ contact records.

Forthcoming book: ‘The Most Human Right’

A bold, groundbreaking argument by a world-renowned expert that unless we treat free speech as the fundamental human right, there can be no others. 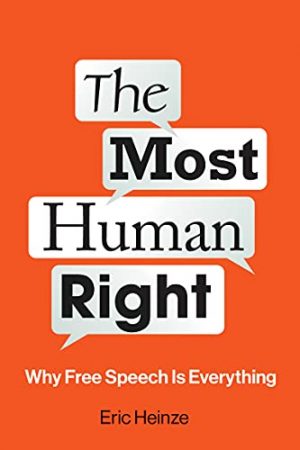 What are human rights? Are they laid out definitively in the UN’s Universal Declaration of Human Rights or the US Bill of Rights? Are they items on a checklist—dignity, justice, progress, standard of living, health care, housing? In The Most Human Right, Eric Heinze explains why global human rights systems have failed. International organizations constantly report on how governments manage human goods, such as fair trials, humane conditions of detention, healthcare, or housing. But to appease autocratic regimes, experts have ignored the primacy of free speech. Heinze argues that goods become rights only when citizens can claim them publicly and fearlessly: free speech is the fundamental right, without which the very concept of a “right” makes no sense.

Heinze argues that throughout history countless systems of justice have promised human goods. What, then, makes human rights different? What must human rights have that other systems have lacked? Heinze revisits the origins of the concept, exploring what it means for a nation to protect human rights, and what a citizen needs in order to pursue them. He explains how free speech distinguishes human rights from other ideas about justice, past and present.

Minow on ‘Government Action to Preserve Freedom of Speech’ 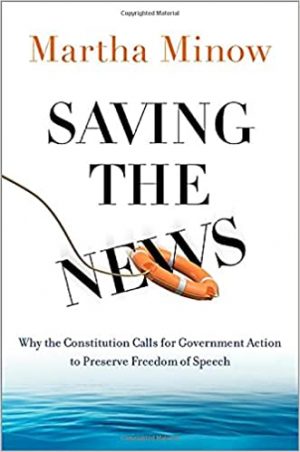 A detailed argument of how our government has interfered in the direction of America’s media landscape that traces major transformations in media since the printing press and charts a path for reform.

In Saving the News, Martha Minow takes stock of the new media landscape. She focuses on the extent to which our constitutional system is to blame for the current parlous state of affairs and on our government’s responsibilities for alleviating the problem. As Minow shows, the First Amendment of the
US Constitution assumes the existence and durability of a private industry. Although the First Amendment does not govern the conduct of entirely private enterprises, nothing in the Constitution forecloses government action to regulate concentrated economic power, to require disclosure of who is
financing communications, or to support news initiatives where there are market failures. Moreover, the federal government has contributed financial resources, laws, and regulations to develop and shape media in the United States. Thus, Minow argues that the transformation of media from printing
presses to the internet was shaped by deliberate government policies that influenced the direction of private enterprise. In short, the government has crafted the direction and contours of America’s media ecosystem.

Building upon this basic argument, Minow outlines an array of reforms, including a new fairness doctrine, regulating digital platforms as public utilities, using antitrust authority to regulate the media, policing fraud, and more robust funding of public media. As she stresses, such reforms are not
merely plausible ideas; they are the kinds of initiatives needed if the First Amendment guarantee of freedom of the press continues to hold meaning in the twenty-first century.

New book on campaign contributions and the appearance of corruption

A critical analysis of the connections that the United States Supreme Court has made between campaign finance regulations and voters’ behavior. 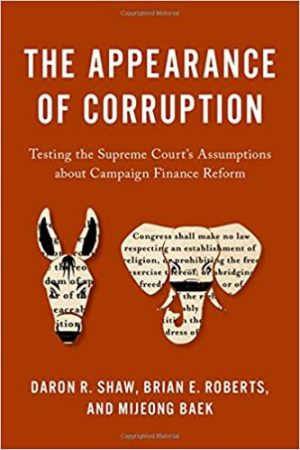 The decision stated that in order to pass constitutional muster, any laws limiting money in politics must be narrowly tailored and serve a compelling state interest. The lone state interest the Court was willing to entertain was the mitigation of corruption. In order to reach this conclusion, the Court advanced a sophisticated behavioral model that made assumptions about how laws affect voters’ opinions and behavior. These assumptions have received surprisingly little attention until now.

In The Appearance of Corruption, Daron Shaw, Brian Roberts, and Mijeong Baek analyze the connections that the Court made between campaign finance regulations and voters’ behavior. The court argued that an increase in perceived corruption would lower engagement and turnout. Drawing from original survey data and experiments, they confront the question of what happens when the Supreme Court is wrong-and when the foundation of over 40 years of jurisprudence is simply not true. Even with the heightened awareness of campaign finance issues that emerged in the wake of the 2010 Citizens United decision, there is little empirical support for the Court’s reasoning that turnout would decline. A rigorous statistical analysis, this is the first work to simultaneously name and test each and every one of the Court’s assumptions in the pre- and post-Citizen’s United eras. It will also fundamentally reshape how we think about campaign finance regulation’s effects on voter behavior. 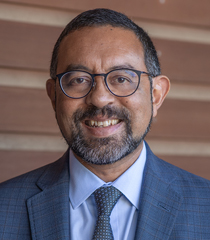 Social media today plays a central, albeit vexing and divisive role in our social and political culture. In response to the alleged failures of social media, a vast array of regulatory proposals have been advanced, and in some cases legislatively enacted, that would restrict the ways in which social media platform owners may moderate content on their platforms. These proposals include, among other things, imposing common carrier status on platforms (an approach endorsed by Justice Thomas in a recent separate opinion), requiring viewpoint-neutral content moderation policies, and restricting or conditioning platforms’ Section 230 immunities in various ways. What all of these proposals have in common is that they seek to impose legal restrictions on how social media platforms control the content that they host, refuse to host, display, and prioritize.

These proposals are in deep tension with the idea that platforms themselves have First Amendment rights to control what content is available or visible on their platforms—what I call editorial rights. This article considers whether, and to what extent, social media platforms enjoy First Amendment editorial rights, and the implications of those rights for assorted regulatory initiatives.