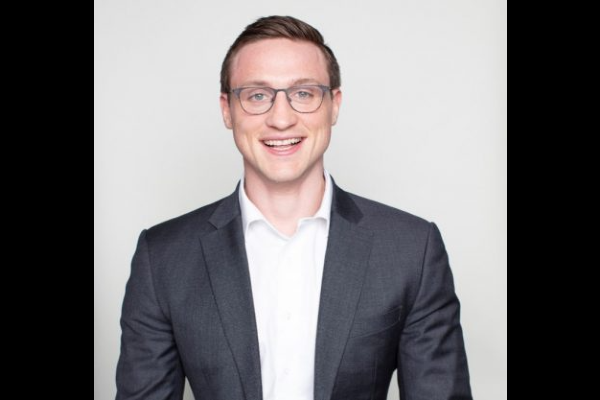 The following commentary is by Clayton Kozinski who is counsel at Lehotsky Keller LLP. He served as a law clerk for Justices Anthony Kennedy and Neil Gorsuch on the Supreme Court of the United States and for Justice Brett Kavanaugh during his time on the U.S. Court of Appeals for the D.C. Circuit.

The conversation about facial recognition technology typically centers around privacy. But an ongoing lawsuit in Illinois shows that it has just as much to do with free expression.

Two sides of the same coin

It’s easy to illustrate why the First Amendment protects the collection of data. Imagine a law prohibiting journalists from counting people at a government protest. That law applies to numbers, not speech. And the law says nothing about publishing the number, only collecting it. But the number communicates something important — how many people are protesting the government. And a journalist cannot report a number he does not know. Restricting his ability to collect that information also functionally prevents him from communicating it to his readers.

BIPA prevents Clearview from collecting information that is publicly available. While the term “faceprint” sounds ominous, it refers only to proportional measurements of a face, e.g., the distance from earlobe to the chin, or the distance from eyebrow to the nose. You could create your own faceprint with a ruler and mirror. Clearview did the same thing on a larger scale with photos of faces available on the internet.

Illinois highlights the privacy rights of its citizens to justify BIPA’s First Amendment intrusion. The Supreme Court has cited privacy as a rationale for restricting the right to collect information in narrow circumstances. But such considerations are relevant only when citizens have a reasonable expectation of privacy. For example, the Court has noted that privacy interests justify restrictions on illegal wiretapping of private conversations because people reasonably expect that third parties are not listening in on their phone calls. But Clearview’s faceprints are not obtained surreptitiously. They’re taken from pictures that anyone can find on the internet. And everybody knows — once something is on the internet, it lives there forever, and anyone can access it.

The ACLU acknowledged that privacy rights do not apply to publicly available information in 2010 when it successfully challenged a law prohibiting its program of continuously recording police officers in public. In a 2012 opinion, the Court of Appeals for the Seventh Circuit endorsed the ACLU’s argument that “simply put, these privacy interests are not at issue here. The ACLU wants to openly audio record police officers performing their duties in public places and speaking at a volume audible to bystanders. Communications of this sort lack any ‘reasonable expectation of privacy’” for constitutional purposes.

The First Amendment analysis is the same whether a law prevents the ACLU from recording police in public, or it prevents Clearview from taking measurements from publicly available photographs. In both instances, the information is obtained from public sources, and the stifled expression serves an important public interest. The ACLU’s project serves the laudable goal of improving police accountability. Clearview’s software aids police in the prompt apprehension of criminal suspects and the deterrence of future misconduct.

Like any powerful technology, we should think carefully about how we use facial recognition. Three simple restrictions would significantly limit the technology’s risks while still allowing us to reap its powerful benefits.

First, facial recognition should never be used for public surveillance. Other governments, including China and the United Kingdom, are already using facial recognition to monitor the public. Surveillance cameras constantly compare faces to a faceprint database and ping the government whenever a match is made. By doing this, they can keep track of anyone with a faceprint on file. We should avoid this type of usage in the United States. For now, facial recognition is only used to help identify unknown suspects once a crime has already been committed. We should draft clear legislation to keep it that way.

Second, facial recognition should be inadmissible in court — and especially not used to obtain warrants. As a recent 60 Minutes segment revealed, privacy advocates are reasonably uncomfortable with the thought of the government raiding homes based on the results of a computer program alone. The government should be allowed to use facial recognition to identify suspects. But after that, they should have to build their case the old-fashioned way. Some producers of facial recognition technology, including Clearview, already impose these limits. But these boundaries should be codified by state and federal regulators.

Facial recognition producers are not opposed to these changes. In fact, Clearview and others have already called for similar regulations. But laws like BIPA, and the litigation they spawn, are causing other major facial recognition producers like Amazon, Microsoft, and IBM to forbid police use of their technology altogether. Keeping police from a tool that can give them a significant advantage in identifying and capturing some of our nation’s most serious criminals is a loss for everyone. Even more so if those limits are imposed to defend a privacy interest in photos that are already publicly available.

This from Kathryn Watson for CBS News (Sept. 13):

Texas Governor Greg Abbott has signed a bill that aims to stop social media companies from banning users or nixing posts based solely on political opinions — the latest salvo by Republicans, who claim that these tech giants are censoring conservative users. The new law requires social media companies with more than 50 million monthly users to disclose their content moderation policies and institute an appeals process. It would also require such social media companies to remove illegal content within 48 hours.

Under the state legislation, users may sue the platforms to get their accounts reinstated, and the Texas attorney general would be able to file suits on behalf of users. 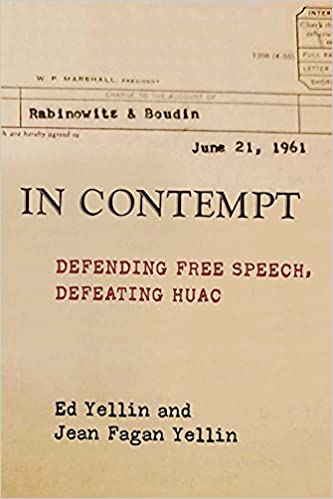 “YOU ARE HEREBY COMMANDED to be and appear before the Committee on Un-American Activities of the House of Representatives of the United States, or a duly appointed subcommittee thereof, on February 10 (Monday), 1958, at ten o’clock a.m. at City Council Chambers, City Hall, Gary, Indiana, then and there to testify touching matters of inquiry committed to said committee, and not to depart without leave of said committee.”

So began a decade of hardship for Ed and Jean Yellin and their three young children as the repressive weight of the U.S. government caught up in the throes of McCarthyism, crashed down upon their careers, their daily household budget, and their relationships to colleagues, neighbors, and their country. In Contempt is a faithful, factual testament to the enduring quality of patriotic dissent in our evolving democracy—and a loving reconstruction of what it meant to be labeled “unAmerican” for defending the Constitution.

“Teaching 9/11 and the Constitution: Free Speech and Civil Liberties” featured First Amendment scholar David Hudson of Belmont University, who spoke about the constitutional issues surrounding the federal government’s reaction to the 9/11 attacks, including the Patriot Act. Jennifer Lagasse, Assistant Director of Education Programs at the 9/11 Memorial & Museum, demonstrated free educational resources that support teachers in both commemorating the milestone 20th anniversary of the attacks and teaching about their enduring repercussions for a generation with no memory of the event. Maria Gallo, Director of Professional Development & Special Programs for the Center for Civic Education, explained a new lesson related to 9/11 and the Constitution for high school teachers.