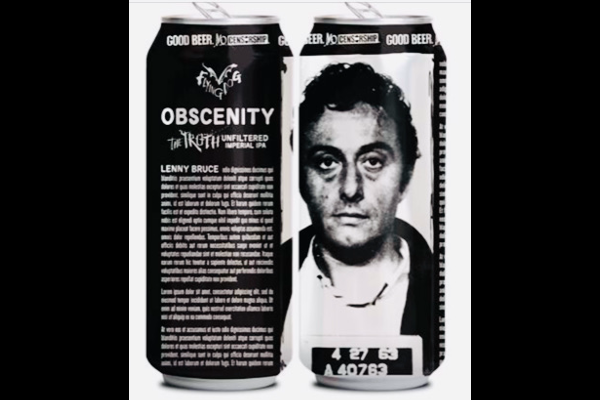 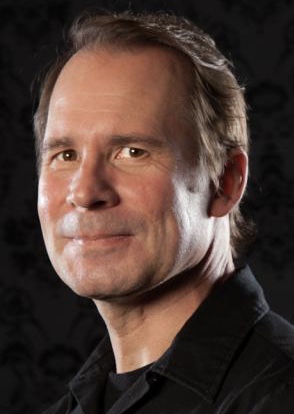 He’s a wild card; a don’t take “no” for an answer kind of guy; he delights in stirring the pot; and he likes to make great beer. Not surprisingly, he’s big on the First Amendment. To that end, he’s paid lawyers to make his case and even launched a group to support free speech rights. One more thing: he’s a talented brewer and a successful businessman. He’s the CEO of Flying Dog Brewery; he’s Jim Caruso.

Caruso, who revels in upsetting the latter-day followers of Anthony Comstock, has a new beer label featuring the ribald comedian Lenny Bruce. To cap the launch of that limited-edition beer, he’s also hosting a November event for Robert Corn-Revere, the noted First Amendment lawyer who obtained a posthumous pardon for Bruce.

Corn-Revere is the author of the soon-to-be-released book “The Mind of the Censor and the Eye of the Beholder” (Cambridge University Press, Nov. 2021) — Floyd Abrams wrote the foreword to the book. 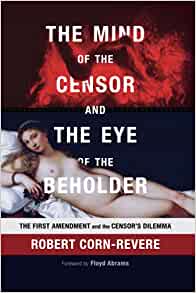 Like a few of Caruso’s beer labels, the cover of the Corn-Revere book will surely “offend” those prone to being so. This Flying Dog beer-and-book event (by-invitation-only) will be held in early November at the brewery in Frederick, Maryland. The Lenny Bruce “Obscenity” beer label, which will have text on it by Corn-Revere, is all a part of a larger scheme of things in the mind of the man who never ceases to think of ways to mix business with conviction.

“‘Obscenity’ is the first of what will be a series of annual limited release beers that pay tribute to free speech,” said Caruso. “This year’s inaugural beer honors Lenny Bruce, whose legacy is freedom of speech and whose life story continues to inspire so many others.”

When it comes to beer and alcoholic beverage control commissions, Caruso continues to be a rebel who abhors the very idea of having bureaucrats dictate the content, not of his beer, but of his message. Some of those messages have been tagged in “bad taste,” which is why Jim Caruso decided years ago to take on some of the beverage control commissions. He first fought the law twelve years ago in a dispute with Michigan alcoholic beverage commissioners. And he’s doing it again this year in a legal battle with North Carolina officials.

We live in a world where people are coddled, messages are muddled and ideas are squashed in the name of political correctness. When the Thought Police closed in on us, we went to Federal court to defend our right to free speech and expression. 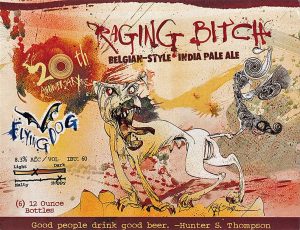 You’ll find those words on the Flying Dog website. They reflect the views of Flying Dog Brewery going back to 2009 when it went through the legal hoops with the Michigan Liquor Control Commission over the name of its “Raging Bitch” beer, replete with artwork by Ralph Steadman.

When it was all over in 2015, and after a favorable Sixth Circuit ruling, Caruso and his brewery prevailed. Per his doing, the attorney’s fees went to launching the First Amendment Society, a non-profit that supports various First Amendment events (including a book party hosted for this writer).

Fast forward to July 2021 when Flying Dog submitted a number of beer labels to the North Carolina Alcoholic Beverage Control Commission (NCABC). The commission disapproved Flying Dog’s label for its Freezin’ Season Winter Ale. The Ralph Steadman label depicts a silhouette of a naked cartoon figure standing near a fire.

Under state law, the commission has the authority — consistent with constitutional mandates, of course — to adopt administrative rules to “prohibit or regulate any advertising of alcoholic beverages which is contrary to the public interest.” (N.C. Gen. Stat. § 18B-105(b)(11)). One of its rules empowers the commission to disapprove labels that are “immodest.” (14B NCAC 15B.1003(a)(2)). Its authority, albeit constitutionally suspect, also empowers it to reject labels it deems “undignified, immodest, or in bad taste.” (Rule 15b 1003-3(2)). The state lawyers for the commission also argued that the label was “inappropriate to many” and that the state had an interest in “protecting the children from explicit content.” Some 218 alcohol labels have been disapproved by NCABC over the years, with very few challenged, and none ever successfully. Then came Jim Caruso and the Brewery’s attorney, Marc John Randazza, who said this for FAN:

I am surprised that this regulation even exists — a regulation that would restrict speech on the explicit grounds of “bad taste.” As the Alcoholic Beverage Control Commission is responsible for alcohol regulations in the state, if it were to regulate simply bad-tasting beer, heck that would be a reason to move to North Carolina! But, like the taste of beer, taste in art is so subjective that it must be the province of individual liberty and the marketplace of ideas. 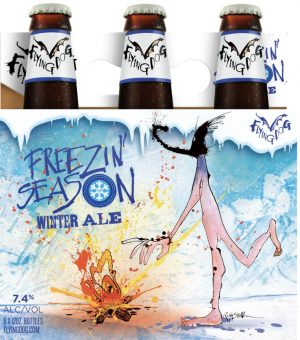 Against that backdrop, Flying Dog went to the District Court for the Eastern District of North Carolina and sought a temporary restraining order and a preliminary injunction against the commission.

Fate being what it is, and before the court had a chance to rule on the relief sought, the commission approved the “offensive” label. Thereafter, Jeffrey B. Welty, Special Deputy Attorney General of North Carolina, filed a response to the plaintiff’s motion: “The commission has approved the label in question,” he argued, thus “Flying Dog is free to market and sell its beer. That is the principal relief requested by the Complaint, rendering the case moot.” If the matter is ultimately deemed moot, that might preclude an award of attorney’s fees.

Judge Terrence W. Boyle refused, however, to let the matter end there. According to Mr. Randazza, during oral arguments on the mootness question, the judge also asked the counsel for the state why it approved a label that it had previously argued was antithetical to “protecting the children from explicit content.”

While the matter is pending the NCABC is scheduled to meet today (Sept. 22) to discuss various matters including, perhaps, the wisdom of retaining its rule barring alcohol labels that are “undignified, immodest, or in bad taste.”

Throughout it all, Jim Caruso proceeds along carefree, never giving up a nickel of his convictions. Moreover, he’s busy thinking up future annual free speech tribute beers, the ones with uninhibited labels and text. Caruso is also energetically preparing to launch Flying Dog’s “Obscenity” beer, the can with text by Lenny Bruce’s (posthumous) lawyer, Robert Corn-Revere.

Those who choose to exercise their First Amendment rights to speak out against abortion have also fallen victim to the Court’s “ad hoc nullification machine” that “push[es] aside whatever doctrines of constitutional law stand in the way of that highly favored practice.” Hill v. Colorado, 530 U.S. 703, 741 (2000) (Scalia, J., dissenting). In Hill, individuals who engaged in sidewalk counseling outside abortion clinics challenged a Colorado law that made it a crime to approach within eight feet of an unwilling listener near the entrance of a healthcare facility “for the purpose of . . . engaging in oral protest, education, or counseling with such other person.” Id. at 707 (majority op.). Even though the law could not be enforced without reference to the content of the speaker’s speech (to determine his “purpose” for speaking), the Court found the law content-neutral. Id. at 725. Applying only intermediate scrutiny, the Court held the law was constitutional because it was “reasonable and narrowly tailored.” Id. at 730. . . .

Justice Kennedy agreed that the majority’s holding “contradict[ed] more than a half-century of well-established First Amendment principles” and that, “[f]or the first time, the Court approve[d] a law which bars a private citizen from passing a message, in a peaceful manner and on a profound moral issue, to a fellow citizen on a public sidewalk.” Hill, 530 U.S. at 765 (Kennedy, J., dissenting). Scholars also accused the majority’s decision of being “deeply colored by abortion politics” and opined that “[t]he decision reflects a disoriented attitude . . . about aggressive legislative as- saults on free speech rights in the most public spaces.” Jamin B. Raskin & Clark L. LeBlanc, “Disfavored Speech About Favored Rights: Hill v. Colorado, the Vanishing Public Forum and the Need for an Objective Speech Discrimination Test,” 51 Am. U.L. Rev. 179, 182 (2001).

The amicus brief also argues that the ruling in Hill v. Colorado is constitutionally suspect under existing law:

Hill was all but reversed in Reed v. Town of Gilbert, 576 U.S. 155 (2015). In that case—notably outside the abortion context—the town “adopted a comprehensive code governing the manner in which people may display outdoor signs.” Id. at 159. The Court rejected the argument that the sign code was content-neutral, explaining that even if a law is content-neutral on its face, it is content-based if it “cannot be justified without reference to the content of the regulated speech.” Id. at 164.

Upcoming this week: Knight Institute event on ‘Lies and the Law’ 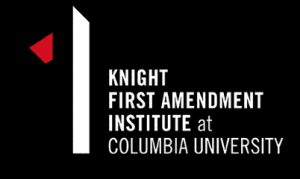 We’ve also been considering whether there might be ways of reducing misinformation or mitigating the harms caused by it, that would not entail investing government officials with the authority to decide what’s true and what’s false. And we’ve been asking what kinds of regulatory interventions the First Amendment should be understood to permit in this sphere. 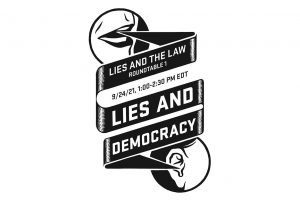 Later this week, we’ll kick off a major investigation of exactly these questions—a multifaceted project called “Lies and the Law.” Overseen by Genevieve Lakier, a visiting scholar at the Knight Institute for the next year, the project will include a series of public conversations—including six roundtables and a major symposium. The first of these roundtables will take place this Friday at 1:00 pm EDT. Titled “Lies and Democracy,” it will consider the question of political lies and will feature Masha Gessen of The New Yorker, Quinta Jurecic of the Brookings Institution, and Sophia Rosenfeld of the University of Pennsylvania. Over the coming weeks, we’ll be publishing short blog posts from roundtable participants. You can read the first three—from Gessen, Jurecic, and Rosenfeld—here.

We hope that many of you will join us for the first roundtable and for future ones as well. Because of COVID restrictions, we can host only a limited number of university students, faculty, and staff in person, but all others are invited to join the conversation online.