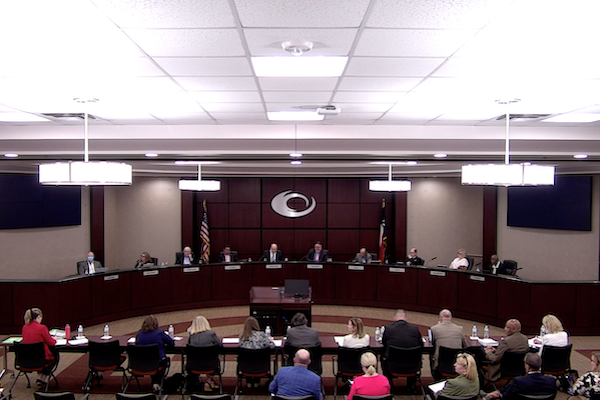 After enduring months of faculty, student, and public anger over the terminations of faculty members — dismissed for supporting a faculty union, criticizing the college’s COVID-19 reopening, or drawing the ire of elected officials — Collin College’s board is going back to censorship basics: The board has decided to ban the public from expressing “anger,” “ridicule,” and “personal attacks” during its meetings.

The restrictions on feelings and criticism were included among the new rules promulgated before Tuesday night’s board meeting.

the @collincollege Board of Trustees has handed out guidelines on what members of the public are and aren't allowed to say in public comments at the meetings, including the following guidance: Anger and ridicule are not allowed.

They provide, among other things, that:

Anger, obscene or profane language, ridicule, personal attacks, and disruptive conduct are not acceptable behavior during the public comment period.

If the offending speaker continues to violate this provision after a warning, they may be removed with “assistance from law enforcement officials.” Although the college’s board can’t itself hold citizens in contempt, law enforcement can pursue criminal charges — as another Collin County resident recently learned during a county board meeting.

In a “working” meeting preceding the regular board meeting, one board member questioned whether it was appropriate for the restrictions — which appear to have been cribbed from those used by a city council in Wyoming — to ban “anger,” rightly pointing out that this is an emotion. That led the board’s chair to pledge that some revisions will be made in future drafts of the speech code.

Frankly, per the First Amendment, the board doesn’t have a choice in the matter — because the version imposed this week raises serious constitutional concerns.

Some of the provisions imposed by Collin College’s board would not survive First Amendment scrutiny, as each invites viewpoint-discriminatory enforcement.

When government bodies open their meetings to public comment, they create a limited public forum. That means they can impose some restrictions that wouldn’t be permissible if they were regulating speech in a traditional public forum, like the public sidewalk outside of the meeting. But restrictions on the comments in the meeting have to be reasonable in light of the purpose of the forum and “not an effort to suppress expression merely because public officials oppose the speaker’s view.” They can, without violating the First Amendment, require speakers to stick to the meeting’s subject matter, impose time limits, and prevent actual disruption of the meeting. But the rules (and their enforcement) must be viewpoint-neutral and intended to prevent “actual disruption.” There’s nothing viewpoint neutral about banning criticism.

Some of the provisions imposed by Collin College’s board would not survive First Amendment scrutiny, as each invites viewpoint-discriminatory enforcement. (That’s easy enough to learn by Googling the phrases used in this document, which reveals that their use by other government bodies has led to unlawful censorship.)

For example, comments expressing or evidencing “anger” would be prohibited, but exuberant and even boisterous adulation of the college would not. Expressing anger to government officials is a hallmark of democratic government. Elected government is intended to facilitate public discontent.

Likewise, a ban on verbal “personal attacks” and “ridicule” likely violates the First Amendment. As one court striking down a school board’s policy prohibiting “personal attacks” during board meetings explained, the First Amendment protects “the ability to question the fitness of the community leaders, including the administrative leaders in a school system, ‘especially in a forum created specifically to foster discussion about a community’s school system.’” While a “personal attack” on a board member might not be an effective strategy to win his or her support, the First Amendment protects a citizen’s right to ad hominem argument, accusations of conflicts of interests, and otherwise holding officials in contempt.

Electing (or being elected) to serve the public in a leadership role doubtlessly exposes the official to public scorn, whether fair or unfair. In Collin College’s case, choices of the outgoing board chairman and current president have exposed current board members to public anger — and fairly so, as they’ve thus far failed to (as board policy requires) affirmatively protect the expressive rights of faculty members. Before attempting to create new rules that would effectively silence critics, perhaps they should consider listening.

In the United States of America, citizens have the right to criticize our leaders and to publicly express our anger about their decisions. Collin College’s board would do well to remember that.

The Dallas Observer gets a response from Collin College:

But when asked for comment, a Collin College spokesperson insisted via email that it was all a big misunderstanding. He wrote that “the guidelines are only a draft” that had been discussed during Tuesday’s work session. Somehow, that draft had been distributed to local media without the proper context.

The board chair says:

We are now to the public comments section on non-agenda items. For those of you that signed up, we appreciate you being here. For the audience at large, I will tell you that we tried to make a little improvement in the process over the last meeting. And so we have tried to provide some guidance on the appropriateness of comments, not trying to infringe on anybody’s free speech, but we’d just as soon not have profanity or that kind of language.

During the “working” session immediately before the board’s regular meeting, the draft was also discussed as a means of policing public comments during the regular meeting. The college’s lawyer said she had “put together a few proposed ground rules for this public comment section” and that “[t]here’s already some copies available, so that we can start laying that groundwork.” The board chair then went on indicate that he would be enforcing the rules that evening:

You know, my intention is not to inhibit anybody’s speech. You know, we’re going to allow people to speak. And that’s what that time is for. But I wanted to try to put down what our expectations are. Last time, there were some people who used profanity that I didn’t think was appropriate. And so when that happened — if that happens tonight, and I hope that it doesn’t, I’m going to interrupt. I’m going to ask them to please not use profanity.

A mea culpa would have been an easy way to regain some credibility. Or at least preserve it.