FIRE > Newsdesk > Top Story > Fordham’s Students for Justice in Palestine group should be celebrating its sixth anniversary. Instead, it’s still fighting to be recognized. 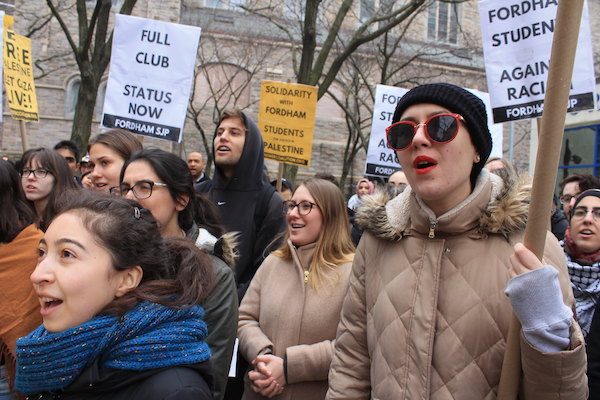 We are approaching what should be the six-year anniversary of the founding of Students for Justice in Palestine at Fordham University. But rather than celebrating, students at Fordham are conducting a letter-writing campaign in the latest effort to get the student group reinstated after last year’s disappointing court ruling that allowed the university to violate its own promises and policies regarding free speech and once again deny SJP recognition based on its viewpoint, which administrators claimed would lead to “polarization” on campus.

SJP’s current campaign, which a spokesperson described to The Fordham Ram as a way to “put pressure on the administration and make them know that we’re here to stay,” includes a letter template supporters can email to Fordham administrators. The template states in part:

Fordham students have fought a long battle for the university to recognize SJP. The scrutiny and censorship that SJP has been put through is a clear violation of Fordham University’s own declared free speech policies. It is outrageous that a university that preaches Jesuit values will go to such lengths to suppress a group of students advocating for Palestinian rights. The university must not bow to racist outside pressures and stop censoring student, especially Palestinian, voices.  It is incumbent that Fordham stand with the principles of academic freedom, reinstate SJP, and issue a thorough apology to the students.

FIRE has written extensively about Fordham’s shameful decision to ban the student group because of its political beliefs. A quick recap: On Nov. 19, 2015, students submitted an application to form a chapter of SJP at Fordham. Almost exactly one year later on Nov. 17, 2016, the application was approved by the student government. However, that decision was overturned by a Fordham dean, in direct contravention of the school’s policies and promises. According to Dean of Students Keith Eldredge, he refused to grant SJP official recognition because he “cannot support an organization whose sole purpose is advocating political goals of a specific group, and against a specific country” and that “the Israeli-Palestinian conflict … often leads to polarization rather than dialogue.”

Thanks to everybody for your support in the past few days. Today, we go to court against our administrators, who have violated their own supposed commitment to academic freedom by completely banning SJP, using various excuses that contradict one another to justify their decision.

In fact, the only thing that has been “polarizing” about this whole affair has been Fordham’s chilling of free expression on campus and silencing of its own students, despite numerous free speech promises and policies. After a trial court sided with SJP in August 2019 and declared it wrong of Fordham to “reject an application of a student club because it criticized the policies of only one nation,” SJP operated — apparently without incident — for nearly a year and a half, without whatever fears Fordham administrators held ever materializing. (SJP was represented in the lawsuits by Palestine Legal and the Center for Constitutional Rights.)

At some point Fordham administrators will have to reckon with the same thing that inevitably happens to anyone who routinely breaks their promises: consequences, and accountability.

With the judiciary stamping its seal of approval on administrators’ ability to disregard Fordham’s free-speech promises and ban student groups whose politics they don’t like, Fordham followed through and revoked SJP’s recognition. This was done without due process or apparently any consideration whatsoever for the impact that would have on the university’s reputation for free expression — which was already far from sterling. FIRE has thrice named Fordham one of the 10 Worst Colleges for Free Speech, and it is classified by FIRE as a “red light” institution, meaning at least one Fordham policy clearly and substantially restricts free speech. And students know the climate for free speech is bad, too. Fordham scores miserably in the College Free Speech Rankings survey that FIRE, College Pulse, and RealClearEducation conduct, coming in at a dismal #145 out of 159 colleges rated. The survey ranking, determined by feedback from Fordham students, includes this troubling comment from one student:

Anytime that I think of wanting to have a protest on campus I think of the severe punishments that the administration has dealt to students in the past. Fordham’s campus is not a place for free speech under the current rules in place about public display and protest.

Clearly, Fordham’s actions have already had a chilling effect on free speech. As my colleague Will Creeley wrote earlier this year after Fordham rescinded SJP’s recognition, “Students, faculty, alumni, and the general public now know — if there were any doubt — that Fordham’s promises of free expression aren’t worth a dime.”

FIRE urges Fordham, for once and for all, to end this campaign of censorship that has sorely damaged the school’s reputation and pitted administrators against the very students whom they have promised to support. Stop this nonsense.

FIRE also commends the Fordham students who are continuing their fight for recognition and against censorship, and we will continue to support the recognition of SJP at Fordham. Because at some point Fordham administrators will have to reckon with the same thing that inevitably happens to anyone who routinely breaks their promises: consequences, and accountability.