Over the weekend, I heard on NPR’s broadcast of the WNYC podcast On the Media what is probably the worst extended defense of what they might think of as “enlightened” censorship I have heard in ages. As a lifelong fan of NPR, I could hardly believe what I was hearing, as the guests used shallow arguments to knock down strawman versions of arguments for freedom of speech, with no pushback from the hosts or any attempt to include the insight of any experts on the pro-free speech side.

Based on the piece that ran on NPR, it’s clear that profound misunderstandings of free speech are common, and a “back-to-basics” approach to education on free speech is needed. Back in May, I published a list of “Answers to 12 Bad Anti-Free Speech Arguments” with our friends over at Areo. To my surprise, the response to the piece was tremendous. Last week (before the piece on NPR and just coincidentally), the great Nadine Strossen — former president of the ACLU from 1991 to 2008, and one of the greatest experts on freedom of speech alive today — offered to provide her own answers to some important misconceptions about freedom of speech. This will be the first part of the series of answers from Nadine on key misconceptions about freedom of speech, and, when applicable, followed by my answers from Areo.

Assertion 1: Free speech was created under the false notion that words and violence are distinct, but we now know that certain speech is more akin to violence.

Nadine Strossen: Physical violence directly and inevitably causes at least some physical harm, as well as associated psychic harm. Words may indeed have the same harmful potential. Unlike physical violence, though, speech can influence listeners only through their intermediating perceptions, reactions, and actions, and only as one of countless other factors that also have potential influence. For this reason, hurling words at someone is materially different from hurling the proverbial “sticks and stones.” Sticks and stones directly cause harm, through their own force, but words at most can potentially contribute to harm; whether particular words actually do cause harm depends on how individual listeners perceive and respond to them, which in turn is influenced by the listeners’ personalities and circumstances, including innumerable other factors that also potentially influence their psyches and behavior.

To this day, powerful critics of Black Lives Matter and other social justice activists seek to suppress and punish their expression on the ground that it allegedly constitutes or causes violence.

When there is a sufficiently tight and direct causal nexus between speech and specific serious imminent harm, including violence, free speech principles permit such speech to be punished. For example, the government may punish a speaker who intentionally incites violence that is likely to happen imminently. As another example, under the “fighting words” doctrine, the government may punish a direct personal insult that is intended and likely to provoke an immediate violent reaction.

In contrast, when the government has been allowed to punish speech because of a more speculative, indirect connection between it and some potential future violence — as happened in the U.S. in the past, and still occurs in other countries — the government predictably exercises this discretionary power to punish disempowered speakers and dissenting perspectives. After all, as Justice Oliver Wendell Holmes noted, “Every idea is an incitement.” More recently, ACLU Legal Director David Cole observed that “A. Mitchell Palmer, J. Edgar Hoover, and Joseph McCarthy all used the advocacy of violence as a justification to punish people who associated with Communists, socialists, or civil rights groups.” To this day, powerful critics of Black Lives Matter and other social justice activists seek to suppress and punish their expression on the ground that it allegedly constitutes or causes violence.

On campus, I often run into people — not only students, but professors — who seem to think they’re the first to notice that the speech/violence distinction is a social construct. They conclude that this means it’s an arbitrary distinction — and that, since it’s arbitrary, the line can be put where they please. (Conveniently, they draw the line based on their personal views: If it’s speech that they happen to hate, then it just might be violence.)

Ironically, the whole point of freedom of speech, from its beginning, has been to enable people to sort things out without resorting to violence.

A quotation often attributed to Sigmund Freud (which he attributed to another writer) conveys this: “The first human being who hurled an insult instead of a stone was the founder of civilization.”

Read more here: “Why It’s a Bad Idea to Tell Students Words Are Violence,” by Jonathan Haidt and Greg Lukianoff, The Atlantic. 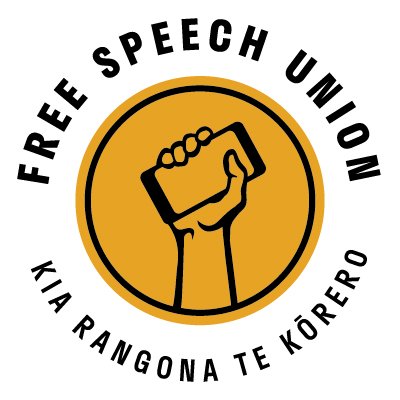 Sept. 7, 2021 Update: Following a terrorist attack in Auckland on Sept. 3, New Zealand’s Free Speech Union released a statement, written by FSU’s Rachel Poulain, with an eloquent defense of the value of free expression, which echos Greg’s response above:

Violence in the name of ideology is the polar opposite of free speech. It is the ultimate attempt to silence those who do not share your worldview.

Freedom of speech — the fundamental human right to peacefully express one’s opinion — is an inherently non-violent principle. This is why we seek to protect it.

Assertion 2: Free speech rests on the faulty notion that words are harmless.

Nadine Strossen: To the contrary, speech is protected precisely because of its powerful potential to affect hearts, minds, and actions; that power may contribute to either good or harm. Let me cite a vivid example from recent U.S. history: The virulently racist “Unite the Right” ralliers’ chants in Charlottesville in 2017. This expression no doubt caused at least some observers to adopt or harden racist attitudes, and to engage in racially discriminatory actions, including violence. Equally undoubtedly, it caused other observers to repudiate racism and to engage in anti-racist activism.

Experience also demonstrates that censorship is only a superficial “quick fix” for the actual problems it allegedly addresses.

U.S. law already permits the government to punish speech that directly, imminently causes certain serious harm — consistent with what is often called the “emergency test.” So the pertinent question is whether the government should be granted more latitude to punish speech that doesn’t pose an emergency — when it has only an indirect, attenuated connection to potential future harm. To be sure, such speech may well contribute to harm. However, to justify expanding government power to impose non-emergency speech restrictions, we would logically have to examine the following additional factors about such additional speech restrictions:

Experience throughout history and around the world demonstrates that government discretion to punish speech because of its indirect harmful potential constitutes a license to punish views and speakers that the government disfavors. Prior to the Supreme Court’s adoption of the speech-protective emergency principle in the second half of the twentieth century, this power was used to suppress the speech of crusaders for various causes that contemporaries viewed as dangerous, including: abolition, women’s suffrage, opposition to wars and the draft, labor unions, Communism, socialism, civil rights, reproductive freedom, and LGBTQ rights.

Greg Lukianoff: If free speech was not powerful, there would be no need either to protect it OR to ban it. It’s not surprising that free speech can be harsh, since it’s meant as a replacement for actual violence! 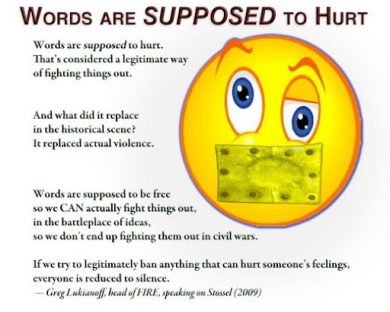 I’ve made this point so many times in my career, in so many different ways, that someone made a graphic about the way I once put it on a TV show.

It’s not surprising that free speech in a democracy can be very heated, when that protection covers people’s most sincerely held religious beliefs and their opinions about matters of life and death.

Iona reminded me how I put this in my first book:

The idea that we should campaign against hurtful speech among adults arises from a failure to understand that free speech is our chosen method of resolving disagreements, using words rather than weapons. Open debate is our enlightened means of determining nothing less than how we order our society, what is true and what is false, what wars we should fight, what policies we should pass, whom we should put behind bars for the rest of their lives, and who gets to control our government. This is a deadly serious business.

Being a citizen in a democratic republic is supposed to be challenging; it’s supposed to ask something of its citizens. It requires a certain minimal toughness — and commitment to self-governing — to become informed about difficult issues and to argue, organize, and vote accordingly. As the Supreme Court observed in 1949, in Terminiello v. Chicago, speech “may indeed best serve its high purpose when it induces a condition of unrest, creates dissatisfaction with conditions as they are, or even stirs people to anger.”

The only model that asks nothing of its citizens in terms of learning, autonomy, and decision-making is the authoritarian one. By arguing that freedom from speech is often more important than freedom of speech, advocates unwittingly embrace the nineteenth-century (anti-)speech justification for czarist power: The idea that the Russian peasant has the best kind of freedom, the freedom from the burden of freedom itself (because it surely is a burden).

See, for example, “Dangerous Ideas: A Brief History of Censorship in the West, from the Ancients to Fake News,” by Eric Berkowitz.