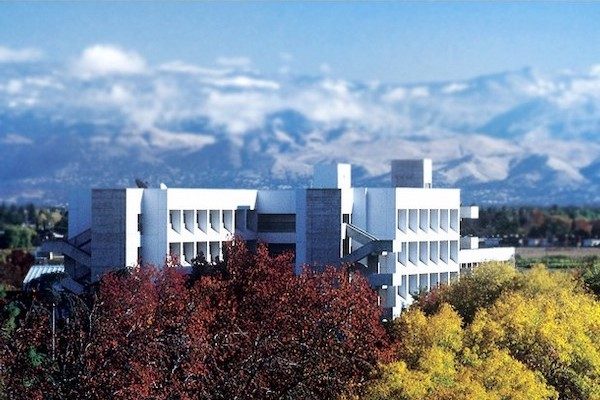 UPDATE (August 16, 2021): The California State University system confirmed to FIRE on Friday that Fresno State “has no plans” to investigate or punish the Fresno State College Republicans for their controversial tweets. In a letter, legal counsel for the CSU system wrote: “Fresno State fully recognizes the free speech rights of our student organizations and has no intent to compromise those rights.”

Speech criticizing the military has a long and controversial history in American discourse. The Fresno State College Republicans are beginning to discover the firestorm that is unleashed when one takes aim at members of the United States military. In this case, that firestorm is protected counterspeech. In contrast to the criticism on social media and beyond, however, the administration of Fresno State has gone too far in announcing a “review” of the group’s protected speech. FIRE wrote to the university this afternoon reminding Fresno State that it may not punish students for protected speech — even speech many find offensive.

It all started when a TikTok video from February resurfaced yesterday.

Patrick Loller is a military veteran who has become an online comedian. They (Loller uses they/them pronouns) posted a video on TikTok in February in which they lambasted people who decline to wear masks during the COVID-19 pandemic.

“If you don’t wear a mask, it’s because you’re a coward,” Loller said in the video that was later posted on Twitter.

That post drew the ire of the Fresno State College Republicans, who retweeted the video yesterday and mocked Loller’s post-traumatic stress disorder: 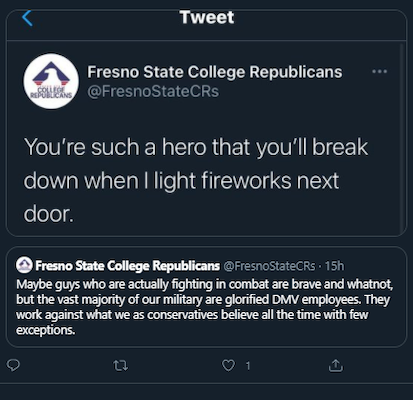 Tweets by the Fresno State College Republicans that were later deleted.

“​​You’re such a hero that you’ll break down when I light fireworks next door,” the group’s official account posted on Twitter.

In another tweet, they appeared to criticize other members of the military, too, describing many of them as “glorified DMV employees.”

“Maybe guys who are actually fighting in combat are brave and whatnot, but the vast majority of our military are glorified DMV employees. They work against what we as conservatives believe all the time with few exceptions,” the College Republicans added in a subsequent tweet.

The group later deleted both tweets and posted another this morning in which it appeared to lay blame for the tweets about Loller’s video on a hack.

That post drew additional public outrage on Twitter, along with several responses from Loller, including another TikTok video in which Loller drew attention to the organization’s decision to delete the tweet.

“Gosh, imagine having your masculinity called into question by a dork like me and your response is to insult every veteran who has ever been jumpy after hearing an explosion,” Loller said in the follow-up video.

We have been made aware of recent social media posts by a student organization that are deeply concerning and inconsistent with the University’s core values. Fresno State strongly supports our nation’s military and its veterans.

Indeed, Loller told The Fresno Bee that they served for 10 years in the Connecticut Army National Guard and were a combat medic and a part of an infantry battalion that was deployed to Afghanistan in 2010. During their time in Afghanistan, Loller suffered brain damage in an attack and retired from the Army in 2016.

“Here’s someone calling themselves Republicans and straight up disrespecting the troops,” Loller told the outlet.

Just as the College Republicans are free to criticize Loller in a public square such as Twitter, Loller is free to respond. That’s how public debate works.

While the College Republicans’ tweet may be objectionable and deeply offensive to many — appearing to show disregard for post-traumatic stress disorder and its effect on military veterans — it is protected by the First Amendment. That’s why Fresno State’s tweet suggesting it would investigate the comments has FIRE concerned.

While Fresno State is within its own expressive rights to condemn the tweets, it crosses a line by promising to investigate them. As a public university, Fresno State is bound by the First Amendment and may not investigate or punish protected speech. As FIRE wrote in its letter to the university:

The appropriate response to offensive expression is “more speech,” the remedy to offensive expression that the First Amendment prefers to censorship. The Fresno State College Republicans will doubtlessly receive the former in spades as they navigate backlash from members of the public who believe the tweets to be insensitive to disabled veterans. Fresno State may criticize protected speech, but they cannot enlist the authority granted to them by the state—to investigate or to punish students enrolled at a public university—in tandem with that criticism.

Even if the investigation were to conclude that the College Republicans did not violate any university policy, the mere existence of an investigation has a chilling effect on speech, particularly speech related to the military.

The CSU Fresno College Republicans have always supported and appreciated our military members, veterans and all who have made sacrifices for our great nation. Security passwords have been changed to avoid any further distasteful posts and need for anything similar to be removed.

The Fresno State College Republicans are reaping the whirlwind of going after a military veteran on Twitter. But there is no question that the university would be well outside its bounds by officially investigating or sanctioning the group.

As always, sunlight is the best disinfectant, and chilling further speech would be an unjust result of this controversy. FIRE urges the university to terminate any investigation of the group, and instead to let protected speech answer protected speech.