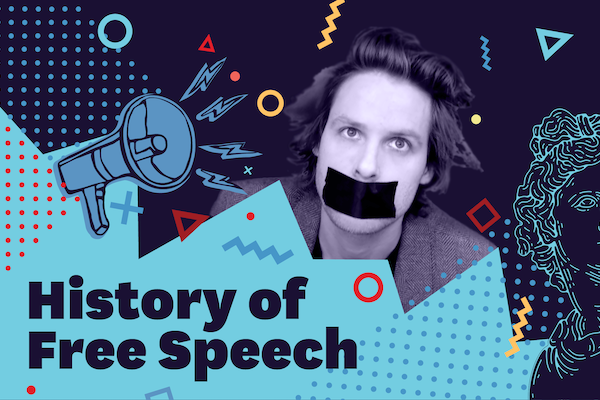 The debate over free speech is a tale (nearly) as old as time. That is the message of the new rap music video, “The History of Free Speech,” commissioned by FIRE and produced by noted emcee and academic Nathan Dufour (@nathanology_) and Event Rap, Inc.

Inspired by Jacob Mchangama’s bestselling book, “Free Speech: A History from Socrates to Social Media,” the video tracks the history of free speech and censorship from the ancient world to the digital age, highlighting how free speech has shaped the modern world.

An academic by trade, Dufour received his Ph.D. in classics from the City University of New York in 2019 and currently teaches courses on the topic of Latin and Greek civilization at City College of New York. When Dufour, a noted rapper and content creator, isn’t teaching, he uses hip-hop to explore concepts from history, philosophy, religion, and the physical sciences.

Dufour, who has produced similar videos in the past on controversial historical and philosophical topics, was excited to work with FIRE on this project.

The antidote to this uptick in cases of censorship, Dufour argues, is not the suppression of ideas one finds disagreeable, but the relentless critique of them.

“I relish the opportunity to create musical historical primers on given topics,” said Dufour. “In the current climate of information transmission, we have a tremendous amount of strong opinions being expressed with great energy and creativity, but not a lot of deep historical grounding behind them. A lot of content, not a lot of context.”

Dufour believes historical context is vital to understanding the role that free speech and free expression play in the world today. History shows that censorship fails to suppress the ideas and speech it is intended to snuff out.

“Censorship has virtually never succeeded in actually suppressing the ideas it seeks to silence, and often does the opposite,” he said.

Dufour’s music video comes at a time when there has been a dramatic uptick in cases of censorship and punishment of students and faculty on college campuses for expressing their beliefs. A recent report from FIRE found that almost two-thirds of student newspaper editors reported experiencing at least one instance of administrative censorship in the year preceding the survey. The 2021 Scholars Under Fire report found similarly shocking figures for faculty and researchers: 111 scholars were targeted for their protected speech in 2021 — an increase from 30 scholars in 2015. Alarmingly, 60% of these incidents resulted in some type of sanction, including investigation, suspension, or termination.

Dufour says he hopes people will realize that questions of censorship and speech on campuses are not new phenomena.

The antidote to this uptick in cases of censorship, Dufour argues, is not the suppression of ideas one finds disagreeable, but the relentless critique of them: “Don’t silence bad ideas — dismantle them loudly, and intelligently.”

When asked what he hopes viewers will take away from the video, Dufour says he hopes people will realize that questions of censorship and speech on campuses are not new phenomena.

“The complexity and messiness of our current free speech debates have been around since the origin of the concept itself!”

The old adage that those who don’t learn from history are doomed to repeat it eerily speaks to our time and circumstances. Perhaps it’s time we take seriously the lessons that history (and this video) can teach us.

To watch the full video, head over to FIRE’s YouTube channel and be sure to subscribe for more stories of how FIRE is working to defend the individual rights of students and faculty at America’s colleges and universities.

Click here to order your copy of Jacob Mchangama’s “Free Speech: A History from Socrates to Social Media.”

Find the full lyrics for the music video here.