If there’s one thing I’ve learned as president of the Foundation for Individual Rights in Education (FIRE), it’s that I will always be amazed by the absurd ways colleges try to censor students and faculty.

This past January, Francis Schmidt, a BCC professor, was forced to go on leave and undergo a psychiatric evaluation—just for posting a picture on Google+. Obviously Schmidt’s picture was so threatening and dangerous that his immediate removal from campus was necessary for the safety of students, right?

Wrong. It was a photograph of his daughter wearing a Game of Thrones T-shirt.

My colleague Sarah McLaughlin has the story:

Schmidt, an art and animation professor, was required to meet with Jim Miller, an executive director at the college, as well as two other administrators prior to being put on leave because Miller believed he received a “threatening email” from Schmidt.

There are many problems with this accusation. First, the email was not sent from Schmidt. Jim Miller is a contact of Schmidt’s on Google+, so Miller automatically received an email from Google when Schmidt posted on Google+. Second, the “threatening” material was a picture of Schmidt’s young daughter doing yoga in a Game of Thrones T-shirt with the quote, “I will take what is mine with fire & blood.” For those who are unfamiliar with Game of Thrones, this is a quote from the character Daenerys, who is pledging to retake the throne in Westeros, a war-torn continent and the primary setting of the series. 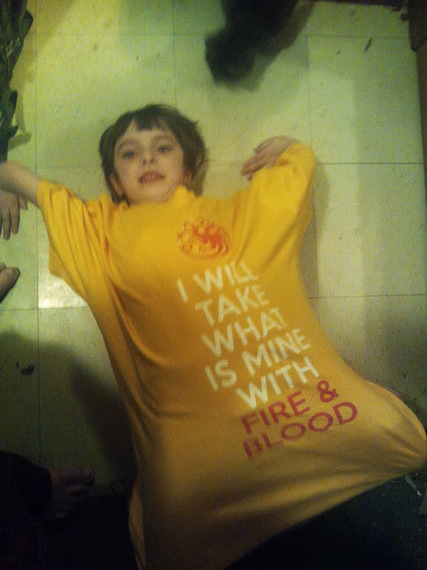 While other characters in the show should probably be concerned that Daenerys will retake the throne with fire and blood (and dragons), administrators at Bergen Community College certainly don’t need to worry. Unfortunately, they are apparently under the impression that Schmidt’s T-shirt is not an expression of his interest in the show, but of his intentions to shoot up the school. Inexplicably, Miller claimed that he believed the “fire” described in Daenerys’ quote “could be a kind of proxy for ‘AK-47s.’”

Schmidt believes the school is acting not to protect students from potential threats, but to retaliate against him. A week before being placed on leave, Schmidt filed a grievance against the school because he was passed up for a sabbatical.

Incredibly, BCC refuses to admit its obvious mistake. In a statement issued today to NJ.com, a spokesman for the college attempts to justify the professor’s suspension by citing the fact that “34 incidents of school shootings have occurred in the United States” this year. What that has to do with a professor’s child wearing a Game of Thrones T-shirt is unclear, to say the least.

Sadly, this kind of outrageous reaction is not an unusual occurrence on campus. In 2011, FIRE dealt with a case of censorship over a poster of the character Mal from the cult hit sci-fi Firefly. (Go Browncoats!)

The similarities between these cases are alarming:

Torch readers will no doubt remember a similar and equally absurd case at the University of Wisconsin-Stout, where Professor James Miller (not to be confused with Bergen’s Jim Miller) posted a picture of actor Nathan Fillion with a quote from Firefly, a science fiction television show. The poster read: “You don’t know me, son, so let me explain this to you once: if I ever kill you, you’ll be awake. You’ll be facing me. And you’ll be armed.” Although the quote actually reflects the space-Western character’s assurance that he would never kill an unarmed man, it was removed by Stout’s police chief because it “refer[red] to killing” and could potentially be viewed as a threat. Miller was also forced to meet with the school’s “threat assessment team” after he responded to the first takedown by posting a satirical flyer that warned of fascism—a poster obviously meant to mock the school’s

Check out a video we made about that ridiculous affront to free speech, featuring legendary sci-fi author Neil Gaiman:

University of Wisconsin-Stout eventually realized its mistake and acknowledged Miller’s free speech rights. It’s time for Bergen Community College to do the same. Censorship, not dragons, is the real danger here.