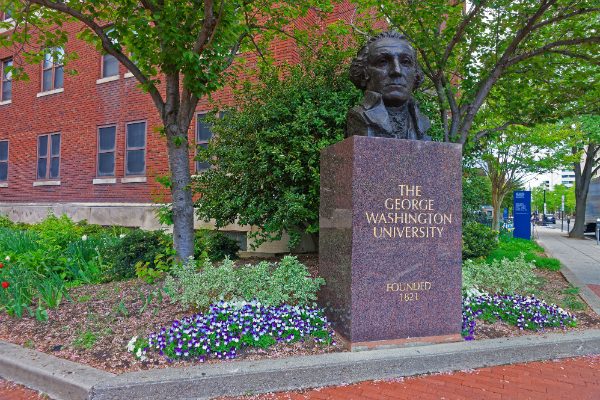 On Nov. 6, a Snapchat video surfaced on Twitter showing two GW students saying: “What are we going to do to Israel? We’re going to fucking bomb Israel bro, fuck outta of here with Jewish pieces of shit.” According to The GW Hatchet, the university contacted the GW police department, which partnered with local law enforcement to investigate the incident.

Unless GW legitimately believes that these students have the capacity to wage war against Israel, threatening disciplinary action serves only to deter and stifle student expression.

GW has explicit, written policies guaranteeing students free speech rights generally consistent with the First Amendment. As the content of the video is neither pervasive enough to rise to punishable harassment, nor serious enough to constitute a true threat, all of the speech should be protected by the First Amendment and, by extension, GW’s policies. Nevertheless, despite GW admitting that “[t]here is no apparent credible threat to our students or our campus at this time,” the university is considering bringing code of conduct charges against the students.

While an internal investigation would be bad enough, GW’s call for law enforcement to investigate expression clearly protected under First Amendment standards is even more harmful. Such an investigation casts a profound, impermissible chilling effect on all GW students, who now must self-censor accordingly lest they, too, face police action for controversial or subjectively offensive speech. Unless GW legitimately believes that these students have the capacity to wage war against Israel, threatening disciplinary action serves only to deter and stifle student expression, especially academic debates on the Israeli-Palestinian conflict.

Nor is this the first time GW has directed its police to investigate student expression. In 2017, university police scrutinized security camera footage to identify the culprits behind posters satirizing GW’s Young America’s Foundation, a conservative student organization. In criticizing GW’s action, FIRE wrote:

[I]t is not the place of the police and university administrators to separate fair satire from unfair satire, nor to set upon a path of imposing discipline based on whether students or officials find the expressed idea, as they understand it, to be offensive.

We call upon GW, as a university that promises to uphold freedom of speech, to familiarize itself with what constitutes protected speech and to end its practice of investigating such expression once and for all.