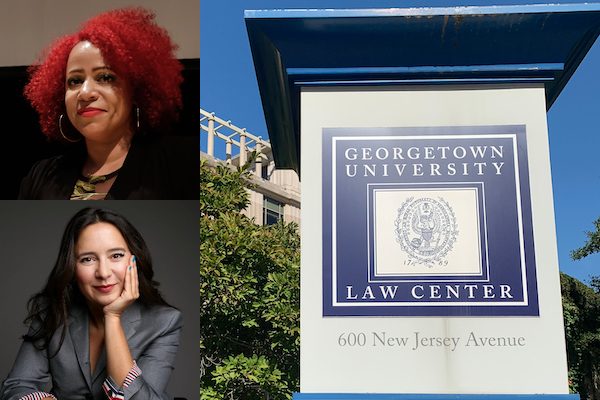 Georgetown University Law Center faces a barrage of criticism for its suspension of Ilya Shapiro over now-deleted tweets criticizing President Biden’s promise to nominate a black woman to replace Justice Stephen Breyer on the Supreme Court. Today, on what was to be Shapiro’s first formal day on the job, even his sharpest detractors are lining up to do what Georgetown’s administration is unwilling to do: defend his right to “untrammeled” expressive freedom at Georgetown, even when they disagree with his perspective.

On the evening of Jan. 26, Shapiro, recently hired as executive director of Georgetown Law’s Center for the Constitution, posted to Twitter that Sri Srinivasan, Chief Judge of the U.S. Court of Appeals for the District of Columbia Circuit, would be Biden’s “best pick” for the Supreme Court:

Objectively best pick for Biden is Sri Srinivasan, who is solid prog & v smart. Even has identity politics benefit of being first Asian (Indian) American. But alas doesn’t fit into latest intersectionality hierarchy so we’ll get a lesser black woman. Thank heaven for small favors?

Because Biden said he’s only consider black women for SCOTUS, his nominee will always have an asterisk attached. Fitting that the Court takes up affirmative action next term.

Shapiro’s “lesser black woman” phrasing went viral on Twitter and critics of the remarks are not in short supply. Among them is Georgetown Law Dean William Treanor, who sent an email denouncing the tweets as “appalling” and “at odds with everything we stand for at Georgetown Law.”

When it comes to protected speech, there is nothing to investigate.

That could — and should — have been how things played out: someone comments on a divisive political subject and is met with an earful of scorn and pushback. That’s how speech works. And, for his part, Shapiro issued several apologies, in which he called the tweet “inartful” and said his “intent was to convey my opinion that excluding potential Supreme Court candidates . . . simply because of their race or gender, was wrong and harmful to the long term reputation of the Court. It was not to cast aspersions on the qualifications of a whole group of people, let alone question their worth as human beings.”

Over the next several days, as the chorus of voices calling on Georgetown to terminate Shapiro reached a fever pitch, warnings also poured in, telling the university that acceding to these demands would be an error.

Amidst criticism of Ilya Shapiro, Georgetown must live up to its promises of free expression.

We are here to make sure they do. pic.twitter.com/1Y36zjcOx4

FIRE issued a statement urging Georgetown to honor its commitment to “the untrammeled expression of ideas and information” because that promise “protects both the right of the lecturer to offer views that others believe to be wrong or offensive, just as it protects the rights of Georgetown’s students, faculty, and administrators to respond to those views with vociferous criticism.” We followed that with a letter to Georgetown on Sunday, Jan. 30, reminding the university that “[f]reedom of expression protects both Shapiro’s tweets and the criticism that followed. . . . Academic freedom relies on this exchange of ideas, however sharp and uncomfortable it may sometimes be.”

Also warning Georgetown not to take action against Shapiro were the editorial board of the Wall Street Journal and of the National Review, as well as Robby Soave of Reason and writer Bari Weiss. Former ACLU President Nadine Strossen released a statement of her own, calling on Georgetown to honor its commitment to freedom of expression, comparing the situation to that faced by Steven Salaita — whose tenured professorship was rescinded by the University of Illinois at Urbana-Champaign for tweets critical of Israel’s treatment of Gaza — because “extra-mural social media posts about public issues do not justify any retaliatory action by the university, specifically including the withdrawal of a job.”

On Monday, Jan. 31, just as dozens of faculty from across the nation joined these warnings by signing an open letter authored by UCLA Law professor and First Amendment scholar Eugene Volokh, Georgetown announced that it had suspended Shapiro “pending an investigation.”

Georgetown’s embarrassing capitulation is antithetical to the tenets of liberal education and cannot be squared with its promise to provide “all members” of its community “the broadest possible latitude to speak, write, listen, challenge, and learn,” even if others find it “offensive, unwise, immoral, or ill conceived.”​​

There is nothing to investigate. Dean William Treanor has made the wrong decision in authorizing this witch hunt, and every day that it continues is an affront to free speech and fairness at Georgetown.

Georgetown’s decision drew rebukes from across the political spectrum, as many — some of whom have already faced efforts to restrict their speech — rightly recognized that limits on speech affect all views. Progressive columnist Jeet Heer called Shapiro’s comments “vile but well within the parameters of academic free speech,” and accused Georgetown of “betraying fundamental principles,” to which 1619 Project author Nikole Hannah-Jones replied, “I agree.” They, unlike Georgetown’s administration, were willing to come to the defense of the right to speak, whether they support or loathe Shapiro’s exercise of that right.

As FIRE and others have been quick to point out, Georgetown has previously defended faculty members over controversial speech, including professor Carol Christine Fair in 2018 when she said — in commenting on Justice Brett Kavanaugh’s nomination —  that the “entitled white men” supporting him “deserve miserable deaths while feminists laugh.” 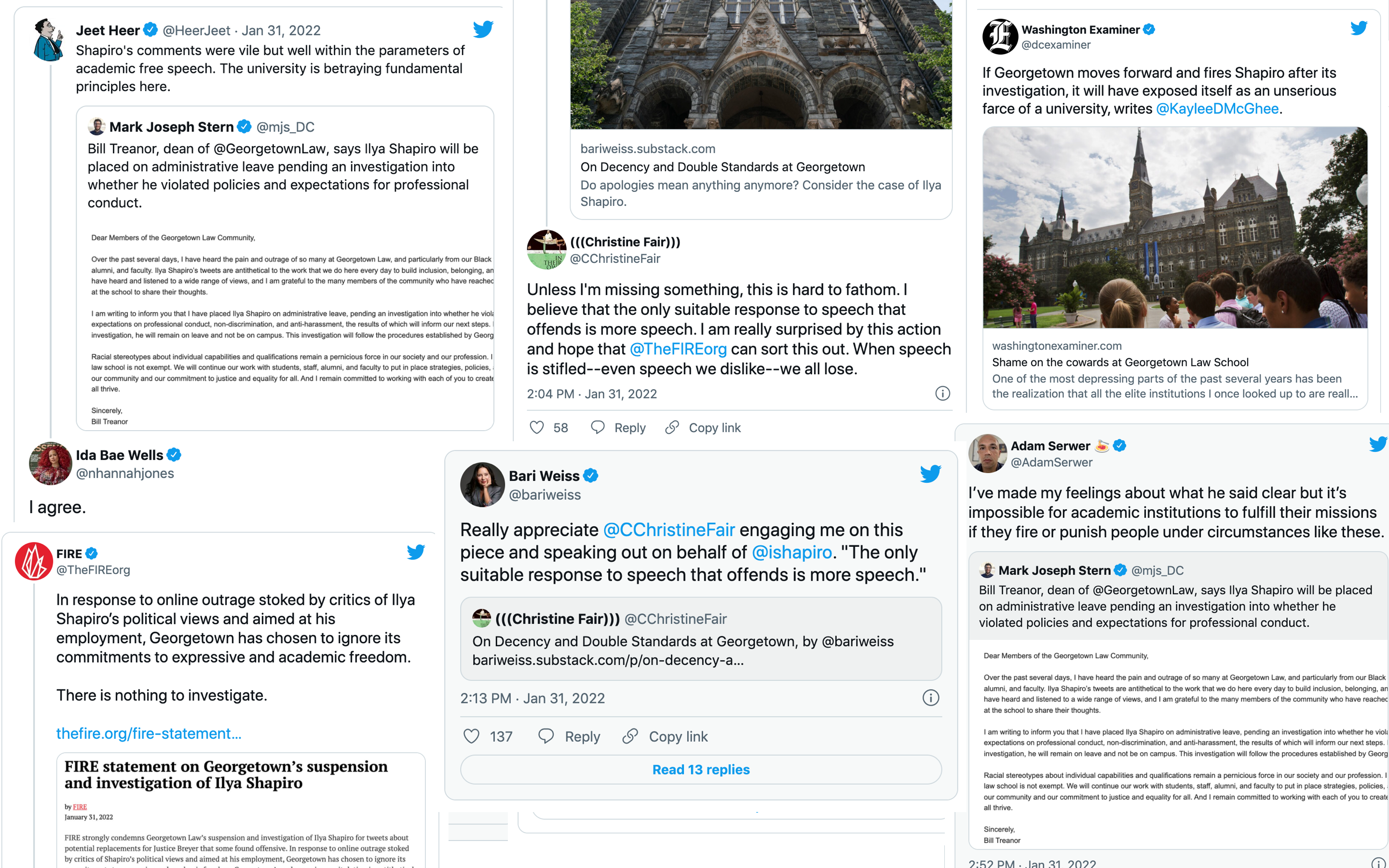 Tweets from across the political spectrum in support of Ilya Shapiro.

Professor Fair, for her part, doesn’t think Georgetown Law did the right thing in Shapiro’s case, tweeting, “Unless I’m missing something, this is hard to fathom. I believe that the only suitable response to speech that offends is more speech . . . When speech is stifled — even speech we dislike — we all lose.” Professor Fair also signed the open letter from college faculty in support of Shapiro’s rights. (The list continues to grow as new signatories continue to be added.)

Georgetown could have — as FIRE urged it to do in our letter — used this as an opportunity to reinforce the importance of freedom of expression, a principle which would help it defend all viewpoints in the future. Georgetown could have followed the example set by University of Alaska-Anchorage, with its 2001 response to professor Linda McCarriston. In 2001, Professor McCarriston sparked outrage after she shared with students a poem she wrote titled “Indian Girls” about the sexual abuse of children. Rather than siding with those who wanted the school to sanction or investigate McCarriston, university President Mark Hamilton did then what Georgetown Dean William Treanor refuses to do now — issue a ringing defense of free speech:

FIRE agrees: When it comes to protected speech, there is nothing to investigate. FIRE Legal Network member Jesse Binnall is representing Shapiro. We are left to wonder which will happen more quickly: Will Georgetown clarify whether its commitment to “the untrammeled expression of ideas and information” also applies to criticism about the president’s criteria for his SCOTUS nominee? Or will the president’s nominee be confirmed by the Senate?