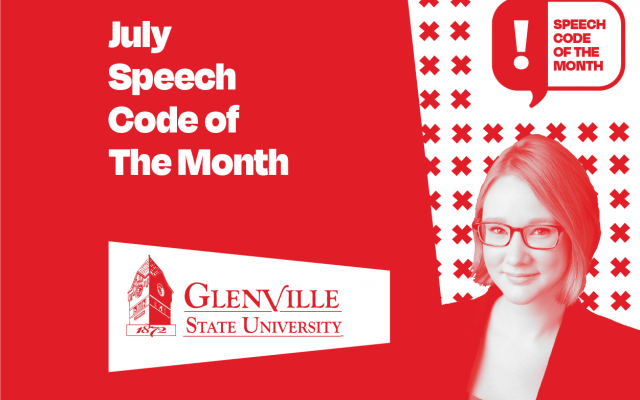 West Virginia’s Glenville State University defines sexual harassment so broadly that just about any conversation that touches on sex or gender could be punished as harassment. This policy, which threatens to chill the speech of students who reasonably fear punishment under its broad and confusing terms, is FIRE’s Speech Code of the Month for July.

Sexual harassment is unlawful conduct that isn’t protected by the First Amendment, and colleges and universities have an obligation to respond to the sexual harassment of their students. But schools all too often set forth confusingly broad definitions of sexual harassment and long lists of examples that make it sound like anything could be punished as sexual harassment, undermining students’ free speech rights.

Glenville State is one of those schools. Its “Sexual Harassment” website starts out with the following, broad definition:

Under that definition, any unwelcome verbal conduct is banned. The policy later provides more detailed definitions of “quid pro quo” and “hostile environment” harassment under the heading “Types of Sexual Harassment,” but nowhere does it say sexual harassment actually needs to meet those standards to be punishable.

Banning all unwelcome verbal conduct would include everything from a single, offensive joke to a pattern of those jokes that actually constitutes unlawful harassment.

A policy like Glenville State’s makes it all too easy for the school to investigate or even punish a student over protected speech.

And the policy affirms that understanding of the definition when you get to the list of examples it provides. Under the heading “Examples of Sexual Harassment in Any Setting” is a 15-bullet-point list of items like “[s]exually explicit questions, jokes, or anecdotes about gender specific traits,” “[s]exually suggestive sounds, gestures, gifts, or visual materials such as magazines, pictures, posters, photos, cartoons, or drawings,” “[o]ffensive name calling, jokes, pictures, objects,” and “[a]sking sexual questions, such as questions about someone’s sexual history or their sexual orientation.”

All of those things could be a part of conduct that meets the Supreme Court’s standard for peer hostile environment harassment in the educational setting: conduct that is “so severe, pervasive, and objectively offensive, and that so undermines and detracts from the victims’ educational experience, that the victim-students are effectively denied equal access to an institution’s resources and opportunities.”

But an isolated sexually explicit anecdote, gesture, or joke hardly constitutes harassment “in any setting” on its own. Students reading the policy, though, are bound to assume they can be punished if anyone claims they’ve engaged in any one of those examples.

And why wouldn’t they, given that colleges routinely investigate students over clearly protected speech. Take American University’s 43-day harassment investigation into students who discussed the Surpeme Court’s leaked abortion opinion in Dobbs, or the Kansas City Art Institute’s expulsion of a student for retweeting sexual art, after alleging the images could constitute sexual harassment. A policy like Glenville State’s makes it all too easy for the school to investigate or even punish a student over protected speech.

Banning all unwelcome verbal conduct would include everything from a single, offensive joke to a pattern of those jokes that actually constitutes unlawful harassment.

Glenville State doesn’t appear in FIRE’s Spotlight database, covering the policies at 481 colleges and universities across the country, but instead was reviewed as a part of FIRE’s recent report on the speech codes maintained by 17 West Virginia institutions, produced in partnership with the Cardinal Institute for West Virginia Policy and the James G. Martin Center for Academic Renewal. The findings from that report were dire: While 18.5% of schools nationwide earn FIRE’s worst, “red light” rating for clearly and substantially restricting free speech, 47% of West Virginia schools surveyed by FIRE earn that rating, including Glenville State.

Glenville State, and the rest of the schools included in FIRE’s West Virginia report, must revise their policies to ensure they better meet First Amendment standards and no longer threaten to chill protected expression. Until then, mountaineers aren’t “always free” on West Virginia’s campuses.