FIRE > Newsdesk > The Eternally Radical Idea > Gurri’s Negation: ‘The Revolt of the Public’ is this month’s book award winner (AND Interstellar Rockabilly!) 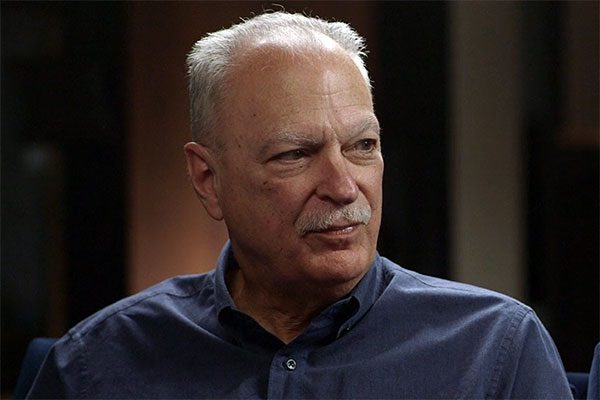 Note: The following are my own definitions, meant to convey the concepts simply and convey specific points. Please read until the end of today’s article for more comprehensive and rigorous definitions that Martin Gurri was kind enough to share! Also, we have edited the paragraph regarding the author’s political perspective in response to his feedback.

Gurri’s Negation: My term to convey Martin Gurri’s observation in his book, “The Revolt of the Public,” that the explosion of social media and information technology that coalesced to accelerate “The Fifth Wave,” has tremendous power to tear down institutions, ideas, and people, but, as of yet, very little ability to create or sustain.

Gurri’s Nihilism: My term to describe the kind of nihilism Gurri describes in his book, in which negation is the primary approach and the lack of constructive or realistic suggestions or proposals amounts to a kind of de facto, and sometimes explicit, nihilism.

The winner of the February 2021 Prestigious Ashurbanipal award is Martin Gurri’s “The Revolt of the Public and the Crisis of Authority in the New Millennium” (first published in 2014, but I’ll be discussing the much extended 2018 edition). 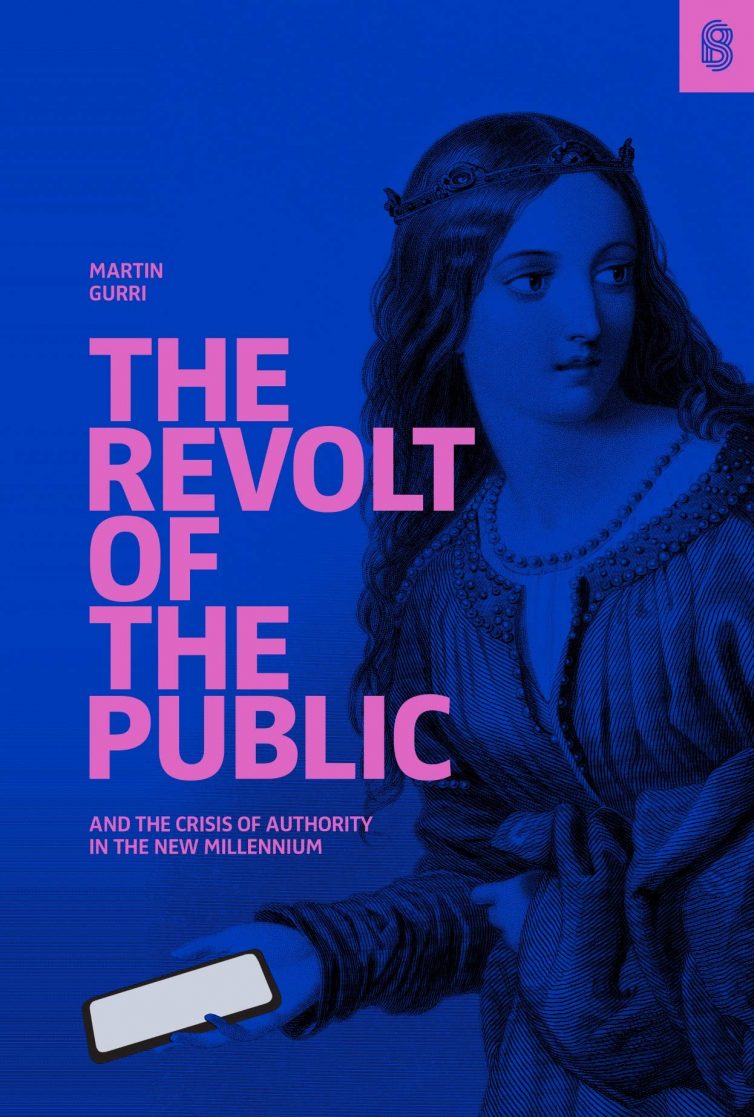 This is a first for our awards. This month’s book is not only an award winner, it’s also part of our modular free-speech arguments AND has implications for Catching up with ‘Coddling,’ which are all three of the major series we do here at ERI.

This book was recommended to me by the great Kmele Foster, and it has had a profound effect on my thinking about the state of the world.

“The Revolt of the Public” explains that the shifts in media technologies that we believe accelerated American political polarization and played havoc with young people’s mental health were actually part of a much larger global transformation that Gurri calls “The Fifth Wave.” Essentially, the empowerment of vast multitudes of people to communicate directly with the world and with each other has genuinely transformed society. Unfortunately, in its current state, this media revolution has only been able to tear things down; institutions, ideas, and yes, even people (a.k.a. cancel culture). This idea is what Gurri calls “negation.”

I liken it to Justice Louis D. Brandeis’ old dictum that “sunlight is the best disinfectant.” Brandeis meant that transparency is a great way to root out falsity and corruption. Yet if you were to focus all of the light of the sun on a single object, it would instantly be incinerated. That’s what I think is happening. Ideas, institutions, and people who are tested by maybe 50 rigorous minds and fact checkers will likely come out of the process with a sharper understanding. But when the same ideas, institutions, or people are put up to the scrutiny of millions, nothing can really stand up.

Negation is indeed tearing things down that needed to be torn down; unfortunately, it seems to be taking everything else with it.

Gurri shows how this manifested in the 2011 Arab Spring and how it has had ripple effects in Spain, Israel, and the American Occupy Wall Street movement. Gurri also argues that these movements generally were rich with targets: people, institutions, and ideas that needed to be torn down, but those same movements were often very hesitant to offer constructive solutions or realistic reforms. This hopeless point of view amounted to a kind of nihilism, according to Gurri—usually not the kind of nihilism of the philosophers, but a de facto nihilism in which nothing constructive is proposed to replace what needs to be torn down.

You can see this in American society in everything from “End the Fed,” to “abolish the police,” to cancel culture on both the right and the left, and to the absolute negation of all assumptions represented by the QAnon conspiracy.

One thing that must be said about the “crisis of authority” we find ourselves in due to the overwhelming power of negation is that very often what critics have discovered is that our existing “knowledge” was truly based on some pretty thin evidence, bad assumptions, and sometimes not much more than the pieties of some elites. Understanding the crisis of authority as only being wrongfully destructive of expertise is to miss that, frankly, we are often asking far too much of expertise and experts, and oversight itself has not been all that rigorous. Negation is indeed tearing things down that needed to be torn down; unfortunately, it seems to be taking everything else with it.

“… we are still in the earliest stages of this transformation, which means that events can evolve in any number of different directions.”

So why, in my previous post, did I warn readers they might not like reading this book? That was intended for people like me who are also left of center and who may find the political perspective occasionally grating. It seems too hard on the Democrats at times, and — in the extended draft published in 2018 — too easy on Trump. After reading my post Gurri responded clarifying that he has never identified as conservative, but no matter what political perspective you think he may be coming from, focus on the big ideas Gurri is conveying. They are both profound and prophetic.

One fertile area for thought begins with the fact that both Gurri and I believe in Nassim Taleb’s idea of “via negativa,” or knowledge by subtraction. Knowledge by subtraction means, essentially, that our best methods for knowing things can only tell us what isn’t true and provide only a shifting outline of what is true. This concept has interesting implications for negation, however. Couldn’t it be that this massive engine of negation we created could help us find better ideas, better institutions, and more reliable experts? Yes. But it will have to evolve quite a bit first, as the kind of argumentation considered legitimate both on social media and on campus needs to become more disciplined.

Right now, Twitter in particular focuses way too much on personal characteristics and beliefs to decide what ideas are true. That is a classic fallacious ad hominem argument which has been re-legitimized on campus in a variety of forms and is now virtually taken for granted. In order for the massive engine of negation to be useful for the pursuit of knowledge, some ground rules, including “address the idea, not the person,” have to be re-established. I am hopeful for this outcome in the long run — but it may be the VERY long run.

From the author’s mouth — or, rather, email

Understanding that, in my attempt to boil down the writing of such a brilliant thinker, I may have elided something important, I emailed Martin Gurri to get his thoughts on the definitions I conjured up. He graciously responded and provided me with the definitions he works from. (Note: He seems like an absolutely lovely man.)

Gurri on “Negation” and “Nihilism”:

“Negation” comes from Hegel’s dialectical logic (which is mostly crap) but is better known through Marx and Engels who adapted that logic to the class struggle; thus the proletariat is the negation of the bourgeoisie, who had in turn been the negation of the feudal class.  In Marxist terms, it’s the complete overthrow of one class by another, by means of revolution. In my terms, it’s the complete repudiation of the system by the public, usually expressed through some aborted form of protest.
[…]

“Nihilism” is pretty straightforward: If you push the negation of the system far enough without any interest in providing an alternative, you arrive at the proposition that destruction by itself is a form of progress. That’s how the term was used by Turgenev, who coined it in “Fathers and Sons.”

Gurri on “The Fifth Wave”:

The Fifth Wave refers to how information flows evolve: Not smoothly or evenly through history but in great pulses or waves, each of which helped determine a specific type of society. The invention of writing required rule by a Mandarin class; the alphabet made the classical republics possible; the printing press (surely the most disruptive of all) was necessary to the vast political and scientific revolutions of the eighteenth and nineteenth centuries; mass media helped educate, top down, the tens of millions who entered history in the late nineteenth and twentieth centuries. The digital dispensation is the fifth such pulse or wave. Despite all the claims I make for it in the book, we are still in the earliest stages of this transformation, which means that events can evolve in any number of different directions.

I want to thank Mr. Gurri for writing such an insightful book and for taking the time to answer my questions in depth! 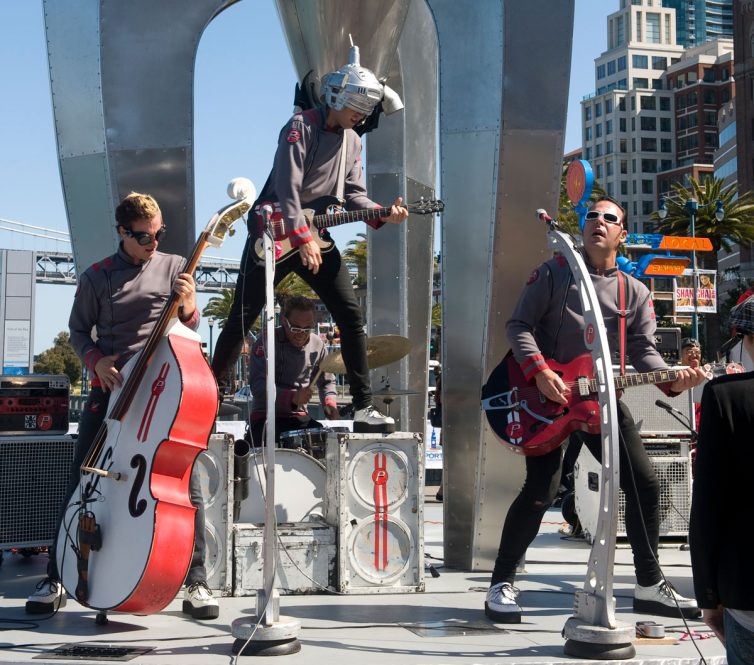 The Phenomenauts play at the Raygun Gothic Rocketship landing party in San Francisco in 2010. (James Addison)

The Phenomenauts is an old favorite band of mine from the San Francisco Bay Area. They play rockabilly — but as if we are currently living in the age of space stations, intergalactic travel, and, well, rockets and robots. They need to make an appearance on an episode of Star Trek. If there ever are rockabilly bands in space, they will be doing covers of The Phenomenauts.

Lastly, if you are looking for my Jack Kirby/Nerd treat award, I did a much longer version on the great comic book artist and writer John Byrne’s run on the Fantastic Four (for which I am taking grief in some nerd circles for NOT addressing offensive comments Byrne has made in the past. Sorry, I really try to avoid learning too much about the private lives and views of artists I enjoy. We can ruin too much art for ourselves following that path).