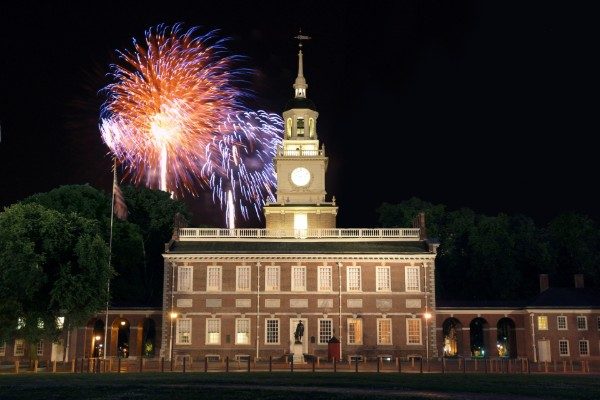 Editor’s Note: FIRE celebrates America’s civil liberties on Independence Day — and every day — through our work defending those rights on our nation’s college campuses.

As we reflect upon the nation’s 243rd birthday today, we’re also thinking about the coming celebration of FIRE’s 20th anniversary this fall. In honor of these special occasions, we’d like to revisit FIRE’s first-ever Independence Day blog written back in 2006 by Robert Shibley, now FIRE’s Executive Director.

A few things have changed since Robert wrote these reflections from our first Philadelphia office overlooking Independence Hall. FIRE is now in a new space across the street to accommodate our vastly expanded staff, and we no longer have to crane our necks to see the Liberty Bell. But Robert’s thoughts on the enduring spirit of the surrounding monuments, and FIRE’s continued work to preserve the values they embody, still eloquently describe our purpose.

‘Proclaim LIBERTY throughout all the Land unto all the Inhabitants thereof’

The above quote, which many readers will no doubt recognize, is inscribed in bronze on the Liberty Bell here in Philadelphia (it originally comes from Leviticus 25:10). FIRE’s offices overlook Independence Hall, and if you crane your neck a little you can see the building that houses the Liberty Bell. FIRE is fortunate; there may be no more appropriate place in our nation for an organization dedicated to protecting our fundamental liberties to be located.

The Liberty Bell gained its fame when it was adopted as a symbol by the abolitionist movement. Thankfully, the scourge of slavery—perhaps America’s greatest challenge to liberty—has long been lifted from our land. Yet, as Americans, we cannot afford to rest on our laurels. Threats to our fundamental rights and liberties continue, as do the lively debates about the nature and origin of those threats.

FIRE co-founder Alan Charles Kors once said, “A nation that does not educate in liberty will not long enjoy it, and will not even know when it has lost it.” The same goes for those who may have been educated in liberty but have forgotten or neglected it. The ultimate guarantors of liberty in a free society are the individuals who care enough to defend it. This Independence Day, it might be nice to take a moment to remember how important liberty is to you—and what you can do to defend it.

FIRE wishes all of our readers and supporters a safe and happy Independence Day.