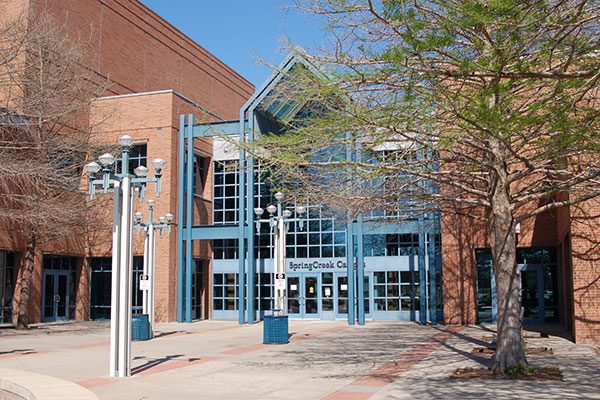 Over the last several months, Collin College’s leadership has moved to terminate three faculty members — Lora Burnett, Audra Heaslip, and Suzanne Jones — over the exercise of their First Amendment rights to criticize both political figures and their institutional leadership. Now, Collin County’s highest elected official has chimed in, sending an email to a range of Collin College officials and Texas lawmakers to praise the “forebearance and tolerance” of the college’s administration for terminating its critics.

A faculty member at a New Jersey institution — alarmed that Collin College’s leadership was refusing to renew the contracts of faculty members because they had criticized its plans to reopen during COVID-19, formed a chapter of a faculty union, or criticized politicians and Confederate statues — emailed various elected leaders in Collin County, including Collin County Judge Chris Hill. (In Texas, the “county judge” is not a judicial actor, but instead presides over the administration of the county government — like a county executive or chief administrator).

In response (and copying Collin College’s administrators, trustees, and a legion of Texas lawmakers) Hill lamented that he had been “drag[ged] into this issue” by receiving an email and praised the professors’ terminations:

First, please understand that these three individuals were not fired from their positions. They completed their employment contracts with the college, at which time the administration decided not to renew their contracts for future service.

Second, you have overlooked some significant facts about these particular individuals’ behaviors and public conduct. Admittedly, I do not know for certain why these individuals’ contracts were not renewed. Those are private personnel matters to which I am not privy. But I can tell you that these three individuals have demonstrated a pattern of reprehensible behavior, consistently and publicly deriding and destroying the very institution for which they worked. They continuously leveled personal attacks against the leaders of the organization, even going so far as doxxing the leaders and attempting to harm their private businesses. Those of us who live in this community (but not you, obviously) have watched as these three individuals have attempted to tear down this great institution and its leaders.

In the end, I am amazed and impressed with the forbearance and tolerance demonstrated by President Matkin and the Board of Trustees. If these three individuals worked for me, and behaved as they have, I would have pursued their immediate termination for cause. The fact that the administration and the Board graciously allowed these three individuals to complete their contracts speaks very highly of the character, the patience, and the professionalism of President Matkin and the Board of Trustees.

I support President Matkin and the Board of Trustees in their decision, and I am grateful for their leadership in our community. Furthermore, I am quite disgusted with the ignorant attacks that you and others have leveled against them from your safe spaces in distant New Jersey.

Hill is wrong. Government officials, including administrators of a public college, cannot retaliate against employees for exercising their First Amendment rights. That’s true whether they do so by firing them in the middle of a contract or by declining to renew their contract when it expires. Nobody would suggest that Hill could, for example, decline to renew the contracts of county employees for belonging to the “wrong” political party or belonging to the “wrong” faith.

Government actors and elected officials cannot use the levers of government employment to deter criticism.

As we’ve repeatedly pointed out, the First Amendment permits faculty members at public institutions, like Collin College, to speak as private citizens on matters of public concern. That includes much of the speech about which Hill complains, such as “deriding” the college or levying “personal attacks” against the “leaders of the organization.” Those leaders are government actors and elected officials; they cannot use the levers of government employment to deter criticism. (As for “doxxing,” Hill is presumably referring to Burnett’s posting the publicly-available contact information of trustees and encouraging voters to contact them — an exercise of the First Amendment right to petition.)

That is not how people interpret references of this sort. Instead, faculty members who identify their employer do so to establish their own credibility, not to suggest that they speak for the institution.

Helpfully, Chris Hill himself provides a perfect illustration of this kind of credential-dropping in action. Take a gander at the list of endorsements on Hill’s campaign website: 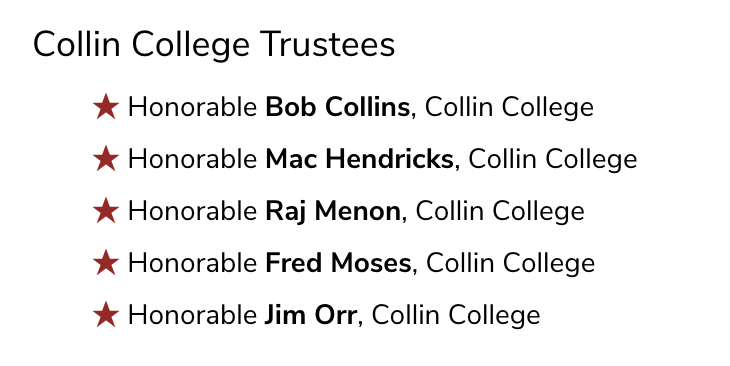 Hill’s campaign Facebook page is likewise laden with posts about these endorsements, and his old website included a long statement from “Collin College Trustee Dr. Bob Collins,” who has long served as the treasurer for Hill’s political campaigns. Other political leaders have also listed endorsements from Collin College trustees using the college’s name.

Nobody, of course, would think that means Collin College — a nonpartisan government institution — endorses particular politicians in their elections.

Then there’s the college’s response to Burnett, faulting her for responding to angry emails sent to her college email address, even though the college’s policy permits “incidental” use of email for personal purposes. A similar standard (“brief and occasional personal use”) applies to use of Collin County’s email system. That would presumably encompass Hill’s use of his county-provided email address to opine on the controversy at Collin College. That is a sensible approach to email usage, recognizing that the line between what is purely “personal” and what is official business is not always bright.

Hill is, like everyone else, free to share his opinions. The First Amendment protects his right to be wrong about the First Amendment. Collin College’s board members — whatever their interwoven relationships with Hill may be — should not listen to him. While Hill has the right to opine, the college’s board members have the legal obligation, enshrined in Collin College policy, to respect faculty members’ expressive rights.