For 15 years, FIRE has been fighting to overturn unconstitutional speech codes on campus. This year, we dramatically expanded that fight and launched a new program aimed at systematically challenging the nation’s worst speech codes in court. Not even a year into its existence, FIRE’s Stand Up For Speech Litigation Project has already had a significant impact. 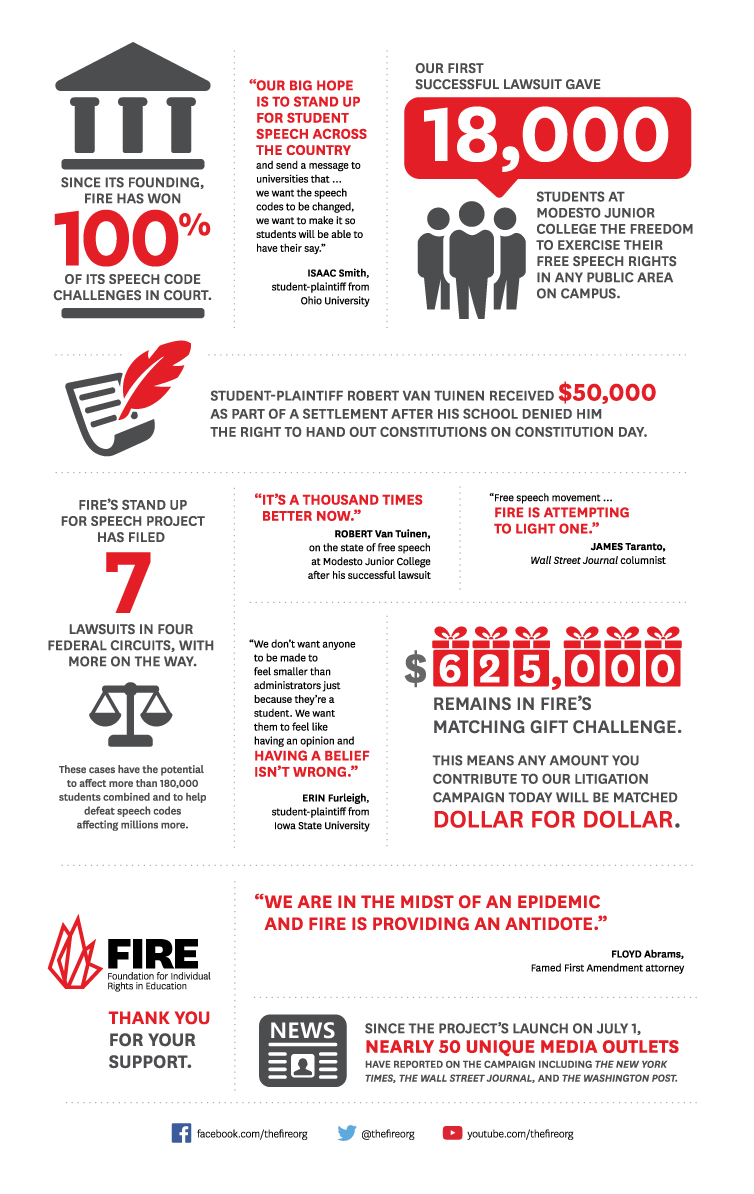 In addition to all these successes, our campaign has also motivated broader reform and sparked new discussions about campus expression. Since July, the Stand Up For Speech project has worked both in and out of court to secure policy revisions affecting nearly 220,000 students; we’ve inspired students like Isaac Smith, Vinny Sinapi-Riddle, and Erin Furleigh to take on speech codes; we’ve generated awareness among millions of Americans; and we’ve put hundreds of administrators on notice about their unconstitutional policies. And we’ve only just begun.

In 2015, FIRE’s Stand Up For Speech Litigation Project will coordinate even more challenges, empower even more students, secure even more policy changes, and generate even more media attention. But FIRE can’t do it alone—we need your support.

FIRE donors have already enthusiastically endorsed the Stand Up For Speech project, and their generous support was critical to its launch. By supporting FIRE today, you can help sustain that momentum. Even better, your 100 percent tax-deductible gift will be matched dollar for dollar.

Since 1999, FIRE has significantly weakened the power of campus speech codes through defense and advocacy work. Now, our Stand Up For Speech Litigation Project is seeking to deal the final blow. This holiday season, help us send a special New Year’s greeting to hundreds of administrators: Respect the Constitution or pay the price. Donate to FIRE today.