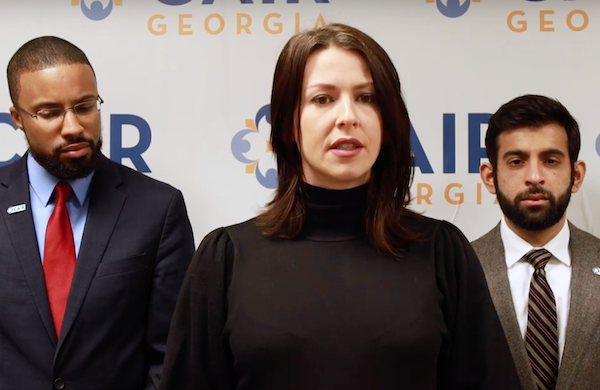 The United States District Court for the Northern District of Georgia, Atlanta Division, ruled earlier this week that plaintiff Abby Martin’s case against Georgia Southern University administrators for violating her expressive and due process rights may proceed. The ruling signals that a Georgia statute prohibiting state entities from entering contracts with individuals or companies engaged in a boycott of Israel violates the First and Fourteenth Amendments, the latest in a string of defeats for state laws targeted at anti-Israel boycotts.

Martin is a journalist, advocate for Palestinian civil rights, and supporter of the Boycott, Divestment, Sanctions movement (commonly known as BDS), an effort that seeks to end international cooperation with Israel in protest of the country’s treatment of Palestinians. She alleged that she was disinvited from speaking at Georgia Southern because she refused to sign a statement, required by Georgia’s anti-BDS statute, certifying that she would not boycott Israel.

Martin’s disinvitation is one of nearly 500 tracked by FIRE’s Disinvitation Database, including 58 that have involved pro-Palestinian speakers.

So how did a disinvitation from a speaking gig end up as a victory for First Amendment rights? Here’s what happened.

Martin was invited to be a keynote speaker for a conference at Georgia Southern in 2019. The keynote came with a $1,000 honorarium, but the contract included a stipulation that forbade speakers from openly supporting any boycott of Israel. This was required due to a 2016 Georgia law, O.C.G.A. § 50-5-85, which stipulated the state shall not enter into contracts with people or businesses whose actions “are intended to limit commercial relations with Israel or individuals or companies doing business in Israel or in Israeli controlled territories.”

In other words, the law targeted BDS proponents.

Given her deeply held personal beliefs and line of work as a journalist and activist, Martin refused to sign the contract. When Georgia Southern withdrew the invitation, and also the honorarium, Martin filed suit alleging the requirement that she sign the contract and the resulting disinvitation violated her rights to freedom of speech and due process.

Ultimately, in this week’s ruling, U.S. District Court Judge Mark Cohen sided with Martin and denied a motion to dismiss filed by the Georgia Southern administrators named as defendants. Judge Cohen ruled that requiring Martin and other parties who wished to enter into a contract with the state of Georgia to certify that they weren’t boycotting Israel was “unconstitutional compelled speech”:

Because [Georgia’s anti-BDS law] discriminates based on the motive for engaging in a boycott against Israel, the certification requirement forces parties contracting with the state of Georgia to publicly assign a motive and speech element to what Defendants deem merely economic conduct. The certification that one is not engaged in a boycott of Israel is no different than requiring a person to espouse certain political beliefs or to engage in certain political associations. The Supreme Court has found similar requirements to be unconstitutional on their face.

Cohen also permitted Martin’s due process claim to proceed, finding that the statute’s uncertain language failed to provide the notice required by the Fourteenth Amendment. The language of the state law is so vague, Cohen wrote, that a contractor may feel compelled to self-censor in private life even when away from the university for fear of running afoul of the rules.

“A contractor that does not want to risk violating the terms of its contract would likely refrain even from activity that is constitutionally protected,” the court ruling reads. “Despite Defendants’ contentions to the contrary, the language in [Georgia’s anti-BDS law] makes questionable whether Martin even would be permitted to speak publicly in support of BDS Boycotts while she was engaged in any contract with the state of Georgia.”

The ruling also said Martin’s disinvitation was likely to have a “chilling effect,” because a ban on one campus suggests a similar ban on all other state-run campuses, as well.

All this, Cohen wrote, “places an unconstitutional incidental burden on speech.”

In recent years, many states have passed laws similar to Georgia’s that seek to prohibit awarding state contracts to BDS advocates. However, a surge in court rulings have held anti-BDS laws to be unconstitutional in Arizona, Kansas, Texas, and Arkansas.

Beyond our long-standing position that boycotts of Israeli academic institutions could harm academic freedom both here in the United States and abroad, FIRE takes no position on the BDS movement.

We have, however, an equally long-standing position that legislative action targeted at BDS proponents is unconstitutional, and FIRE has submitted amicus briefs to federal courts arguing that anti-BDS statutes like the one at issue in Martin’s case violate the First Amendment. For example, here’s our brief to the United States Court of Appeals for the Eighth Circuit, filed with the Institute for Free Speech, arguing that Arkansas’ anti-BDS law violated the First Amendment. The Eighth Circuit agreed, issuing a ruling concluding as much back in February.

“Proud to announce that we have officially won our lawsuit against the state of Georgia’s anti-BDS law,” Martin posted to Twitter in celebration of the court’s ruling. “I look forward to the law being formally struck, but very excited that Georgia’s anti-BDS law is now unenforceable due to the judge ruling it unconstitutional.”

Like Martin, FIRE is pleased to see the district court reach the correct ruling in this case. We will keep readers updated as it progresses.