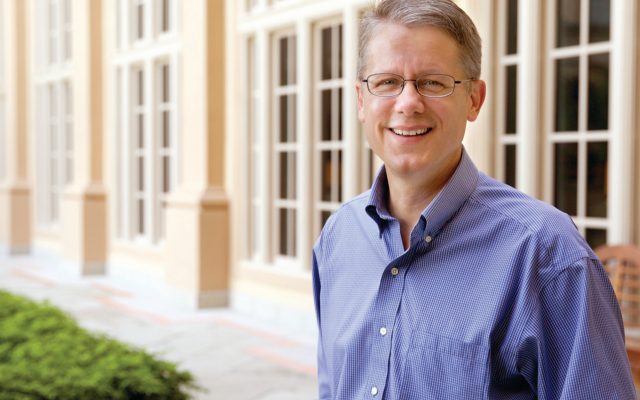 On Thursday, July 23, professor Mike Adams was found dead from a gunshot wound in his home in Wilmington, North Carolina. On Monday, his death was ruled a suicide.

Mike, a criminology professor at the University of North Carolina–Wilmington, was someone I first met early on in my time at FIRE. Formerly a liberal and atheist, he had converted to Christianity and become a conservative a few years before, and was a columnist and author with the zeal of the converted. Through his nearly two decades of on-and-off persecution by UNCW—and make no mistake, that’s what it was—he and I (along with others at FIRE) also became friends.

Better writers, including former FIRE President David French, commentator Mark Steyn, and others, have already written well about Mike’s life and death, and his disgraceful treatment at the hands of his own university. My own relative lateness in writing this stems from two things. First, though the initial reports already suggested that Mike had taken his own life, an actual determination was not made until this week. As public and as vilified a figure as Mike had become, foul play was unfortunately a possibility. Second, the intensity of my feelings about his death and the reasons for it made this, and continue to make it, a hard thing to write.

At this point in a post memorializing anyone controversial, it’s become customary to say something like “Of course, I didn’t agree with everything Mike said,” or somehow distance oneself from his perceived faults. I am not going to do that here. Maybe I agreed with every word he said, maybe I didn’t. It doesn’t matter. Despite what we have all been trained to pretend when speaking online these days, you can be friends with people with flaws, problems, and “wrong” opinions. We know this because this describes all of us, and all of our friends, and we have no obligation to be defensive about it. Plus, if you want criticism of Mike, you won’t have any trouble finding it. Just check out the comments on any story about his death for the ghoulish celebrations of his end, starting while his body was practically still warm. Or check out the media coverage of his death, the general attitude of which is summed up by Buzzfeed: “A Professor Who Was Known For His Racist, Misogynistic Tweets Was Found Dead In His Home.” Welcome to the world of the hit obituary.

One thing about Mike that probably has not received enough attention was his strong support for the fair treatment of students on his campus and elsewhere. The first state law guaranteeing students the right to counsel in campus disciplinary matters was passed in North Carolina in 2013 as a result of the procedural abuses aimed by UNCW (yep, them again) at the SAE fraternity chapter on campus. Mike’s help was invaluable in supporting that effort and other right-to-counsel laws, which you can read about in this 2018 article co-authored by Mike and fellow professor and due process stalwart KC Johnson of Brooklyn College. If your son or daughter ends up getting accused of some campus offense and actually has the right to hire an attorney or other advisor to stand with him or her at the hearing (a right that was vanishingly rare before 2013), Mike Adams deserves a share of the credit.

The fact is, though, that in a society that respects dissent—the society in which we are supposed to be living—Mike would almost certainly still be alive. The term “cancel culture” is on everyone’s lips these days. That’s because, despite the fact that there isn’t an agreed-upon definition of what “cancel culture” means (Yale professor Nicholas Christakis, who is himself a victim of this culture, is moving towards one possible definition), its reality cannot be credibly denied. Mike was only days away from the end of his career at UNCW and, given the cartel-like behavior of colleges and universities, likely the end of his academic career altogether, having been forced into negotiating for early retirement in the wake of a tweet some found offensive about North Carolina Governor Roy Cooper’s COVID-19 restrictions.

FIRE has written many thousands of words over the years about the value of free speech in a free society. But one aspect that is too often overlooked is how adherence to free speech ideals, both in law and culture, spares people the psychological damage that occurs when they are told that they are free to speak, and they see others with whom they disagree being free to speak, but they are in actuality forced to suppress their opinions for fear of losing something they value —their jobs, their education, sometimes even their liberty (the last, thankfully, still rare in America).

I don’t know if any psychological studies on this exist. (It’s hard to think of a way that conducting an experiment, for example, would be ethical.) Stories from behind the Iron Curtain certainly suggest that those in repressive societies struggled with it on a psychological level, and Orwell’s description of “doublethink” from 1984 is in many ways similar. But I don’t think a double-blind study is required for us to understand that feeling like the people around you are enjoying freedoms that you don’t get puts a lot of stress on a person. In fact, you could probably just ask your friends and neighbors how it makes them feel. A Cato/YouGov survey released less than two weeks ago revealed that “62% of Americans say they have political views they’re afraid to share,” with “strong liberals” the only ideological group in which a majority doesn’t feel that way—and even there, an alarming 42% still do. In fact, members of every group are more afraid to speak out than they were in 2017.

Many people are going to wear down under this constant, even if low-level, stress and fear (though it was certainly not low-level for Mike), and some will be driven to depression by it. It is also bound to exacerbate any already existing mental health problems, from which Mike, like so many other Americans, may have silently suffered. Add to that the mob demands that constitute the “cancellation”—demands literally intended to expose the target to other suicide risk factors including joblessness, social isolation, anxiety, etc.—and the entirely predictable result is that some number of the cancelled will take their own lives. Mike Adams appears to have been one of those people.

Does that mean that those who vilified Mike, demanded his firing, and otherwise participated in or egged on his “cancellation” didn’t have the legal right to do so? Not at all. Some, of course, may have been engaged in defamation or other unprotected speech, but the majority of those calling for his destruction, and rejoicing in its success, were within their rights to do it. And the lion’s share of responsibility has to attach to Chancellor Jose Sartarelli and the others at UNCW who, if history is any guide, were only too happy to finally have an excuse to end Mike’s career. (Sartarelli, for example, defended the decision to pay Mike an early retirement payout of around $505,000 on the basis that UNCW’s last, losing crusade against him had cost the university even more money. Truly, this was a profile in courage.) But having the right to do something doesn’t make it morally right.

Sometimes there is no legal solution to a problem. Attempting to censor cancellation attempts on the grounds that they are harmful would be no more effective than hate speech bans have been at containing hate, and would ignore the rights of and potential damage to those who wish to freely express their vitriol. Two wrongs don’t make a right. This is nothing new: The First Amendment, for example, would be meaningless if it didn’t protect even the speech of those who would seek to revoke it. But that doesn’t mean it actually should be revoked, or that those who argue for the abolition of the rights of everyone except those who think like they do are morally right.

Can you argue that someone who expresses views with which you disagree should lose his or her livelihood, education, career, etc. for the crime of disagreeing with you? Yes. Should you? No. Instead, try actually having a discussion with someone, and convincing him or her that you’re right, understanding that if you can’t convince them, you should respect them anyway as fellow Americans and fellow human beings. Daryl Davis, an African-American musician, befriended 200 members of the Ku Klux Klan and convinced them to give up their robes. If all the “cancel culture” mobs since social media was invented have, together, actually convinced 200 of their targets that they were wrong (rather than that they must say they were wrong), I’d be shocked.

And, of course, treating someone with respect as an individual, rather than as an instrumentality by which to send a message of fear to those who would dare oppose you, is far less likely to result in your having a share, however small, in the blame if your target decides that the pain of living is worse than the pain of dying.

As for Mike, it’s my hope that he has finally come to the place “where death shall be no more, neither shall there be mourning, nor crying, nor pain anymore, for the former things have passed away.”

If you are in distress or contemplating suicide, FIRE encourages you to take advantage of any student or employee-assistance counseling services available through your college, your employer, or in your community. If you are in immediate crisis, please call 911 or 1-800-273-8255.