One hundred percent of college presidents think that protecting citizens’ free speech rights is important to American democracy according to a new survey from the American Council on Education (ACE). The survey results, released on Tuesday, present the opinions of 471 college presidents of public and private institutions on the state of free speech and inclusion on college campuses across America.

Additionally, a majority of college presidents had a positive outlook on how students interact with opposing views on campus, with 90 percent rating their students as good/very good or fair at seeking out and listening to opposing viewpoints on campus. This falls in line with FIRE’s findings in our Speaking Freely survey that 93 percent of all students agree that their school should invite a variety of speakers on campus. 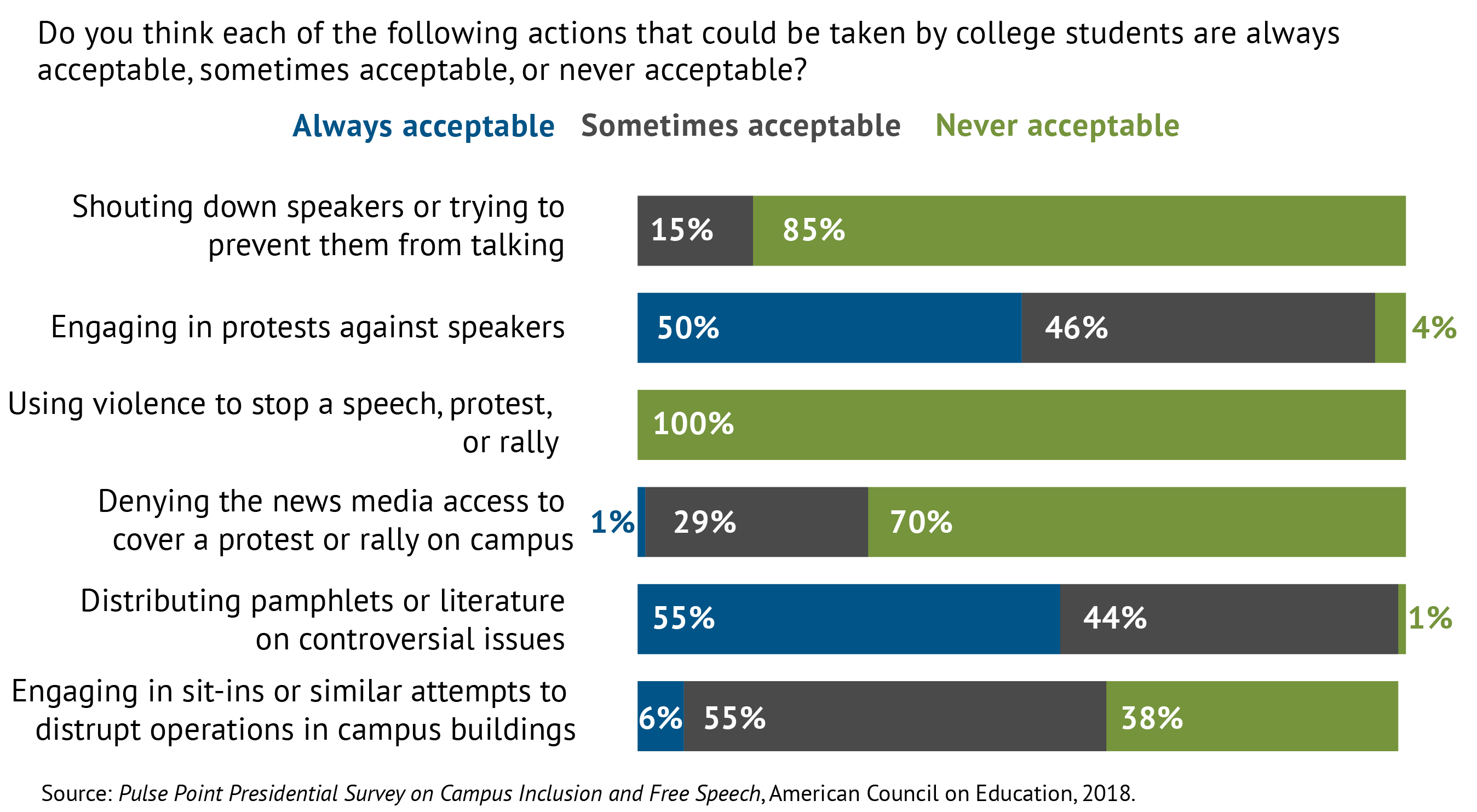 Like the students polled in FIRE’s recent survey, the college presidents questioned here came out strongly against using violence to stop speeches, rallies, and protests. FIRE’s survey found similar results among college students, with only one percent of students saying they would use violence to disrupt an event on campus.

College presidents interviewed also came out strongly against shouting down a speaker or trying to prevent a speaker from talking, with 85 percent responding that it would never be acceptable to do so.

Worryingly, however, some of these results show tepid support for constitutionally protected speech. According to this survey, 44 percent of college presidents think that it is only “sometimes acceptable” for students to engage in the simple act of handing out pamphlets or literature on controversial issues. These “sometimes” responses have real-life consequences. Take for example the recent FIRE case of Joliet Junior College student Ivette Salazar, who was detained by police for handing out anti-capitalist fliers on campus, or FIRE’s ongoing lawsuit against Pierce College for threatening to kick student Kevin Shaw off campus for handing out Spanish language copies of the Constitution on campus.

According to FIRE’s 2018 Spotlight on Speech Codes Report, around 32 percent of the schools in FIRE’s database maintain our lowest “red light” rating, meaning those schools maintain at least one policy that clearly and substantially restricts freedom of speech. The number of red light institutions falls each year, but college presidents still often heap praise upon the notion of free speech while simultaneously censoring students on campus. That’s one of the reasons why FIRE tracks statements regarding free speech made by administrators in our Leader Statement Database, to hold administrators accountable when they make commitments to students.

It’s encouraging to see that college presidents acknowledge that exposing students to points of view that may be “offensive” or “biased” is more important than protecting them from such speech. It is also heartening to hear that college presidents seem to have strong ideals regarding which types of speech should be acceptable. However, in our experience, campus administrators have too often supported free speech only until it was politically inconvenient to do so. They must show their ideals pragmatically by reforming their campus speech codes and by refusing to punish students even when their speech is highly offensive. As always, FIRE stands ready to assist college presidents in crafting policies that respect and uphold students’ right to free expression.