Last March, the City University of New York (CUNY) system, in response to calls by legislators and advocacy groups to ban chapters of Students for Justice in Palestine (SJP) from CUNY campuses, commissioned an independent investigation into allegations raised in a 14-page letter sent by the Zionist Organization of America (ZOA). Last week, the independent investigators—a former federal judge and a former federal prosecutor—released a report reviewing the allegations and concluding that much of the speech was protected by the First Amendment. This represents a strong statement in protection of students’ First Amendment rights, yet at least one New York legislator vows to continue his campaign against students whose views he finds unacceptable.

The CUNY investigation, after reviewing the allegations raised by ZOA and other groups, conducting over 60 interviews, and reviewing evidence proffered by witnesses and outside groups, lists several “observations”:

Much of what we have reported is protected speech. Die-ins, mock checkpoints, and the SJP banner may offend some, but the First Amendment does not permit a public university to take action against them. As the Supreme Court has reminded, free speech may “best serve its high purpose when it induces a condition of unrest, creates dissatisfaction with conditions as they are, or even stirs people to anger.” [Terminiello v. Chicago, 337 U.S. 1, 4 (1949).] Political speech is often provocative and challenging, but that is why it is vital to university life. If college students are not exposed to views with which they may disagree, their college has short-changed them.

[…] As a public university, CUNY is limited in the ways that it can respond to hate speech, whether the words are anti-Semitic, racist, anti-Muslim, or anti-LGBT. CUNY cannot punish such speech unless it is part of a course of conduct so pervasive or severe that it denies a person’s ability to pursue an education or participate in University life. It cannot mandate civility or sanction isolated derogatory comments. But what CUNY cannot punish, it can still condemn. As a general rule, CUNY’s Administrators and College Presidents have spoken out against anti-Semitic comments. That practice must continue; hate speech must be challenged promptly and forcefully lest it breed.

We would be remiss if we did not address directly calls for SJP to be banned from CUNY campuses. Our investigation does not support that action. There is a tendency to blame SJP for any act of anti-Semitism on any CUNY campus. That is a mistake.

This conclusion is exactly right. While FIRE takes no position on the substantive issues involving Israel and Palestine, we take a dim view of efforts to punish speech concerning these issues—or any issue of concern to college faculty or students. While CUNY administrators are free to use their own speech to condemn and counter speech they find offensive, they cannot ban student organizations they disagree with, nor can they require student governments to refuse to fund organizations whose views they dislike. This is, as FIRE noted at the outset, clearly-established precedent under the First Amendment.

Since advocates for censorship won’t let black-letter law stand in their way, state Sen. Jack Martins took to the pages of the New York Post to demand that administrators push such limitations aside as well:

The First Amendment guarantees the right to free speech, no matter how objectionable others may find the message. But it does not guarantee the right to receive taxpayer dollars to support or further that message. And that is where CUNY can, and must, be more aggressive in addressing this problem.

CUNY can’t tell people what they’re allowed to say, but it can absolutely tell an organization how to conduct itself if it wants to receive government funding.

It can continue allowing students to express their views on Israel or any other matter without blessing SJP’s annual “Israel-Apartheid Week” on its campuses, where members portray Israel Defense Forces soldiers as goose-stepping Nazis. Nor does CUNY need to allow “die-ins,” where SJP supporters lay on fake bloody sheets and ask Jews if they can “wipe their butt” with the Israeli flag.

CUNY must immediately set a policy that student groups who promote or incite violence, intimidation or harassment against Jews or anyone else will lose their funding, period. Students must know that hate will not be tolerated on campus in any form against anyone.

Actions speak louder than words. Simply saying you condemn something is no substitute for taking action to stop it. CUNY has resisted real action for far too long. It must take this step. Now.

None of Sen. Martins’ demands are permissible under the First Amendment.

Student organizations, like SJP, generally receive their ‘state’ funding from student fees—that is, the money the students themselves pool through the university—allocated by the student government. The Supreme Court has unequivocally held that viewpoint-discriminatory funding of student organizations is not permitted at public universities and colleges. “When a university requires its students to pay fees to support the extracurricular speech of other students, all in the interest of open discussion,” the Supreme Court noted in Board of Regents of the University of Wisconsin System v. Southworth (2000), “it may not prefer some viewpoints to others.”

Nor is this Martins’ first venture into demanding that student organizations critical of Israel be censored. This past June, he introduced a proposed bill that would strip student groups of funding if they did so little as encourage boycotts of some countries, including Israel, or used speech seen as “intolerance” or “hate speech.”: 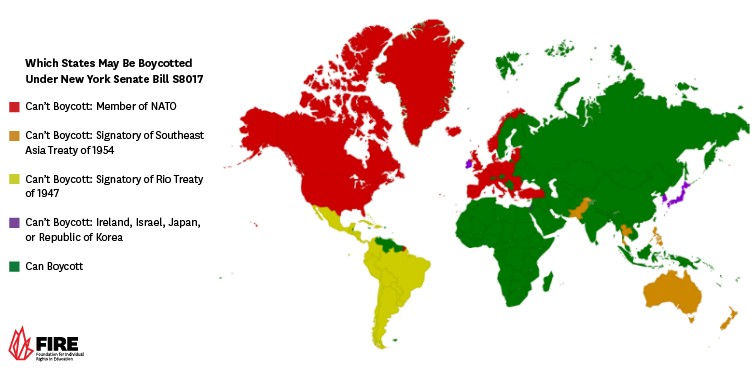 That bill, fortunately, failed. It didn’t fail, however, because New York legislators demonstrated a sober respect for students’ First Amendment rights—the New York State Senate actually voted in favor of it—but because the New York State Assembly never took up the bill before the end of the legislative session.

That this bill sailed through the New York State Senate and only died on procedural, and not substantive, grounds should deeply concern the citizens of New York. If—or when—Sen. Martins’ colleagues again heed his call for censorship, FIRE will be watching.