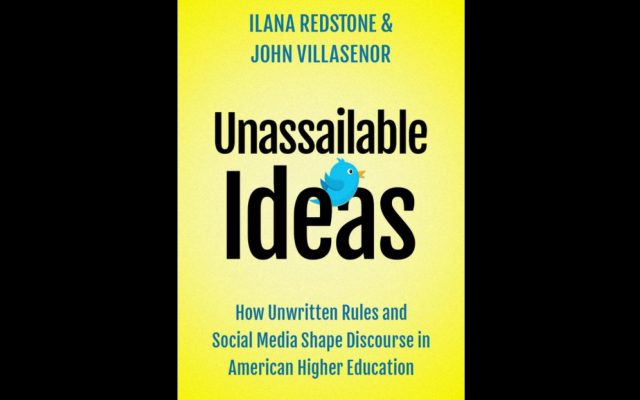 As its title suggests, “Unassailable Ideas: How Unwritten Rules and Social Media Shape Discourse in American Higher Education,” charts the influence of two disparate yet frequently intersecting forces, offering readers an explainer on the impact it has had on the college campus. 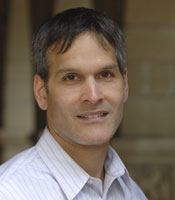 John Villasenor.
In doing so the authors, University of Illinois at Urbana-Champaign professor Ilana Redstone and University of California, Los Angeles professor John Villasenor, offer a succinct and worthwhile analysis of some of the challenges that have increasingly plagued higher education in recent years.

Redstone and Villasenor’s thesis is that three “foundational beliefs” have come to have a controlling effect on the contemporary academic environment. The first is that, as the authors write, “any action that aims to undermine traditional frameworks or power structures is automatically deemed to be good.” The second is that unequal group outcomes are per se the result of discrimination and not other structural or cultural factors. 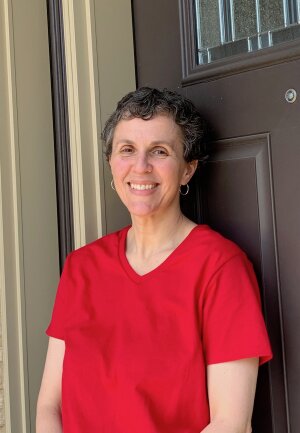 Ilana Redstone.
Third, finally, is what the authors call the “primacy of identity along the lines of race, gender, gender identity,” and other traits. The authors write further that “these beliefs, which are bolstered in significant part through social media, have such a strong moral valence that the mere act of questioning them can have significant negative professional consequences.”

Some readers will accept the basic outlines of the three beliefs the authors lay out, and some won’t, and I don’t endeavor to mediate that discussion here. Even without taking those beliefs as given, however, one can evaluate the academic landscape of the last few years and at the least conclude that some of the fiercest disputes and censorship campaigns have concerned expression implicating one or more of these beliefs. The record-breaking year FIRE has had in terms of case inquiries, and the numerous campaigns we’ve seen targeting faculty for their speech, would seem only to add to this assessment. And social media’s capacity to act as an accelerant in these disputes is well established.

Academic freedom: not what it used to be

While “Unassailable Ideas” considers the whole university, from the leadership on down to the faculty and students, it focuses most heavily on how these effects have come to bear on faculty, and the implications of these trends for academic freedom and scholarly inquiry. Necessarily, this involves an analysis of the state of tenure and its relation to academic freedom. The authors note that skewed incentives of the tenure and promotion process are longstanding. For those on the tenure track, there is a strong disincentive to do anything to rock the boat or make themselves negatively stand out in a way that could affect the chances of being awarded tenure.

Again, this is not a new phenomenon, but the authors credibly argue that the tenure tightrope walk has become even more sensitive and unforgiving in light of the larger trends they describe at work. What’s more, tenure isn’t what it used to be even for those who have it, and it is increasingly subject to assaults from the institutions that should be defending it. As an example, the authors discuss a case longtime FIRE readers will be familiar with: the case of John McAdams at Marquette University. McAdams was suspended for a blog post criticizing a graduate student instructor, which led Marquette to attempt to strip his tenure and terminate him before being rebuked by the Wisconsin Supreme Court.

What McAdams’s case highlights to the authors is the extent to which universities sometimes devalue academic freedom, when staunchly defending it would risk alienating those offended by the faculty member’s speech. (In McAdams’s case, his advocacy put him firmly on the side of a student who criticized his instructor for suppressing opinions against same-sex marriage during class discussions.) In those circumstances, academic freedom becomes just one of a number of concerns to be balanced — and often in such a way where it loses out. As the authors write of Marquette’s defense of McAdams’s treatment:

[Marquette] placed itself in the position of being able to argue that essentially any controversial statement can fall outside the protection of academic freedom. Take, for example, Marquette’s assertion that “academic freedom is just one value that must be balanced against” the obligation to “respect the dignity of others.” It’s difficult to express an opinion on a controversial issue without creating the risk that someone will feel that his or her dignity isn’t respected.

The uncertain foundation of academic freedom in these circumstances, they write,

allows the process of deciding when expression falls outside the protection of academic freedom to be a results-driven exercise where the goal of finding a faculty member in violation can always be attained by simply narrowing the boundaries to the point of excluding the expression in question.

I’ve seen enough universities do this in my time defending faculty to believe they’re right.

Among the most interesting analyses in “Unassailable Ideas” is its examination of the peer review process and the quickness with which social media pressure has transmogrified the normally drawn-out, staid feature of academic life. For much of the history of academic publishing, of course, there was no such thing as social media. Work was submitted to journals and met either with rejection or requests for revision, then sent out to a group of peer reviewers, then returned with suggested edits and resubmitted, hopefully securing publication. The process can take months, and sometimes years.

Social media, on the other hand, has the ability to upend all this work in a matter of days. The authors argue that trial by social media has effectively established itself as the unofficial final step in the vetting process. This is where the three foundational beliefs the authors outlined previously come into play. They write:

The three beliefs have created a situation where certain ideas, claims, and questions are protected from criticism, and therefore from open inquiry. Academic publications that present ideas running counter to these beliefs are subject to what is in essence an extra round of social media-driven review that starts after a paper has already successfully navigated the traditional peer-review process and been published.

The examples they cite certainly bear this out. Among them is the reaction to Rhodes College philosophy professor Rebecca Tuvel, who in 2017 published a peer-reviewed article called “In Defense of Transracialism” in the feminist philosophy journal Hypatia. In that article Tuvel made a philosophical argument for accepting people who identify as being of another race, in the same vein that society is increasingly accepting of transgender individuals. A firestorm of controversy ensued, fed significantly by social media. The backlash was sufficiently severe that a group of the journal’s associate editors issued an apology for the “harms” the article had caused, and many later resigned in protest. The journal’s editor refused to accede to demands to retract the article, and refused to disavow the work of the peer reviewers. (Greg Lukianoff and Jonathan Haidt covered this matter in “The Coddling of the American Mind,” in a section appropriately titled “Retraction is the New Rebuttal.”)

There are proper ways to mediate disputes over the quality of academic research, and needless to say none of them involve death threats.

At least Tuvel’s article withstood the assault and remained published. Portland State University professor Bruce Gilley wasn’t so lucky. In 2017, Gilley published an essay titled “The Case for Colonialism,” a broad academic defense of western colonialism, in the Third World Quarterly. A backlash similar to that against Tuvel’s article ensured; numerous members of the editorial board resigned, and a petition calling for the paper’s retraction gathered over 10,000 signatures. Gilley ultimately supported the withdrawal of the essay after the journal’s editor received death threats.

There are proper ways to mediate disputes over the quality of academic research, and needless to say none of them involve death threats. And while criticizing scholarship on social media is protected by free speech and academic freedom, it’s also true that social media is a poor medium for vetting scholarship, given its tendency to strip the work of relevant context and invite bad actors who oftentimes haven’t read the work they’re condemning. You don’t have to agree with the authors’ thesis about the foundational beliefs regarding power structures, identity, and discrimination to get the sense that when those beliefs are implicated by scholarship, the response can be particularly vociferous.

A heated public response to a work of scholarship isn’t itself a bad thing. But when the response short-circuits the usual channels of academic discourse by declaring upfront that certain ideas are off limits, it undermines the long-term credibility of the academic enterprise.

The viewpoint diversity we have

If “Unassailable Ideas” drives any point home, it’s that faculty can all too easily become their own worst enemies on academic freedom. They can’t afford to be.

They’re more concerned with better managing the diversity of viewpoints that is already present, for instance, through coming at academic discussions from a place of humility, the value of which, they write, “is illustrated by considering it has arrogance as an antonym—a trait that few people would call admirable, and one that certainly isn’t conducive to either learning or to productive discourse.”

The authors also, crucially, advocate a broad understanding of academic freedom that makes room for a wide range of viewpoints, which FIRE has always advocated. This may seem fundamental, but if “Unassailable Ideas” drives any point home, it’s that faculty can all too easily become their own worst enemies on academic freedom. They can’t afford to be. Academic freedom is fragile enough as it is. Tenure isn’t what it used to be, and fewer academics have it than they once did.

There are all too many people and interests that look to delegitimize the academy to enhance their own standing. Faculty shouldn’t do their work for them.