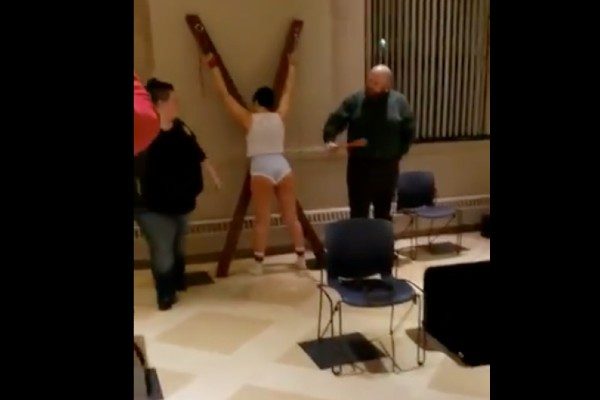 When contemplating their First Amendment rights, most people don’t immediately think of their right to engage in consensual spanking demonstrations. But that’s exactly the expression at issue in a free speech blunder at Indiana University Bloomington last week.

The controversy started when a student tweeted a video of a SexFest event, during which individuals from community group Bloomington Kink demonstrated how to paddle a consensual partner without causing injury. Multiple media outlets picked up the story.

Here’s the video of @IUBloomington sponsored and paid for event promoting sexual violence. This event was held in an open room of a dorm hall. pic.twitter.com/FcZiyFjQHz

IUB administrators then canceled the remainder of SexFest, initially claiming they had received “credible information about a planned disruption” and had chosen to cancel the student-organized event “in the interest of safety.”

But that claim is undercut by a contemporaneous official statement from IUB Provost Lauren Robel announcing an investigation into SexFest and calling it “inappropriate, disturbing, and offensive.”

Given that SexFest’s events did not constitute obscenity, IUB’s only grounds for its cancellation are that the series was subjectively offensive, or that the university had concerns about student safety in light of threatened disruptions.

Speech loses its First Amendment protection only when it falls within certain narrow categories, such as obscenity, defamation, fraud, or speech integral to criminal conduct. Because SexFest—and its related events and demonstrations—do not fall within any of these categories, it is protected speech, and IUB cannot lawfully curtail it.

SexFest is sexual — but not legally obscene

Because SexFest events necessarily explore matters of a sexual nature, IUB administrators may be tempted to peg SexFest’s safe paddling demonstration or other events as “obscene,” but this would also be incorrect.

Obscenity is a very specific legal category of unprotected speech describing content that depicts “patently offensive ‘hard core’ sexual conduct.” As both the U.S. Attorney General’s Office and the Seventh Circuit have pointed out, even most pornography is not considered legally obscene, and is instead considered protected speech.

If pornography, in which participants are often completely nude and engaged in full-on intercourse, is not obscene, surely IUB must concede that a fully-clothed woman being paddled in a safety demonstration is also not obscene. This is particularly important to keep in mind on a college campus comprised primarily of adults.

The SexFest demonstration departs even further from the legal definition of obscenity because it was a form of sex education, which has political, cultural, and scientific value. (Obscenity includes only patently offensive sexual speech that lacks such value.) As our letter explains:

SexFest … includes many events weighing political, social, scientific, and cultural issues attendant with sex on college campuses. Students this year heard from scientists and health practitioners, had the chance to be tested for HIV, learned about contraception options, and discussed the recently politically-charged issue of sexual consent. … The “Kink Workshop,” which you declared offensive, included free HIV testing and information about consent and safe sex practices. Even the paddling demonstration was aimed at teaching safe techniques.

Given that SexFest’s events did not constitute obscenity, IUB’s only grounds for its cancellation are that the series was subjectively offensive, or that the university had concerns about student safety in light of threatened disruptions.

Neither of these potential explanations squares with the First Amendment.

Subjective offense is not a constitutional reason for censoring student expression, including student-sponsored events, on college campuses. Courts have made clear that the First Amendment protects content that offends, including but not limited to: wearing a jacket reading “Fuck the Draft,” burning the American flag, putting on a Nazi march in a predominantly Jewish town, publishing a cartoon of a policeman raping the Statute of Liberty and Goddess of Justice with the headline “Motherfucker Acquitted,” and even pornography portraying women enjoying pain and humiliation.

So, too, is SexFest protected expression — even though administrators and other members of the campus community might find it offensive.

As the Supreme Court long ago put it, “the mere dissemination of ideas—no matter how offensive to good taste—on a state university campus may not be shut off in the name alone of ‘conventions of decency.’”

In the same vein, as FIRE Newsdesk readers know, administrators at public universities cannot cancel an event because of potential disruption or public backlash. To do so is to effectuate a heckler’s veto.

We’re monitoring the situation and look forward to hearing back from IUB.