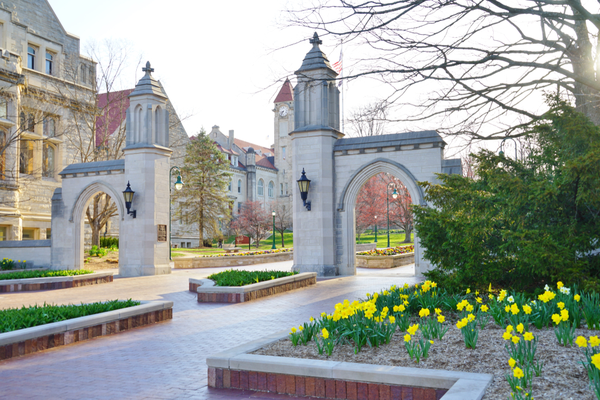 A pair of anonymous online posts that disparaged Jewish fraternities and students roiled Indiana University’s campus this week — leading the university to dispatch its police department to try to obtain the anonymous poster’s identity. Yesterday, FIRE wrote the university and its law enforcement agency to explain that the First Amendment — that is, the law — protects even offensive, hateful, and anonymous speech. 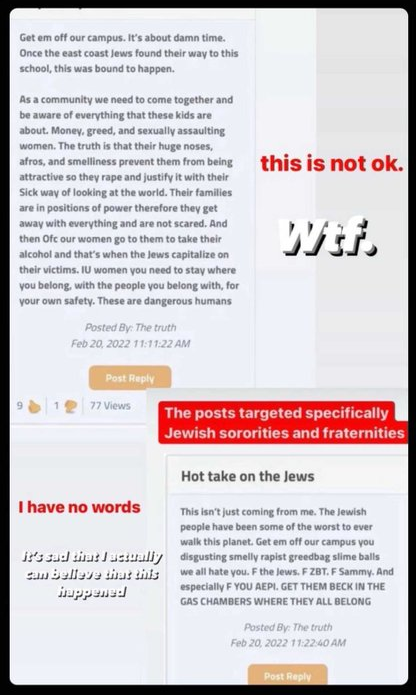 A screengrab of the Greek Rank posts, with added reader commentary, that was shared publicly.

The posts, which appeared on the gossip forum, Greek Rank on Sunday, reportedly contained “extreme antisemitic comments,” going so far as to claim Jewish students in certain fraternities are “dangerous,” “disgusting” “rapist[s]” who should be expelled from campus and exterminated in gas chambers.

According to WTHR, Greek Rank deleted the posts “at the university’s request.”

But as explained in our letter, while IU may roundly condemn or dispute the posts, it may not, as IU’s new provost vowed Monday, deploy university police to censor or track down who’s behind them. At least, not without violating the First Amendment.

That’s because, while the posts may be offensive to many, express clearly hateful ideas, and even endorse violence, the First Amendment protects them. The poster, whoever they may be, falls short of threatening or inciting violence, which can cross the line into unprotected speech. As we explain in our letter, quoting extensively from Supreme Court jurisprudence (citations omitted):

[T]he posts do not rise to the level of unprotected true threats, an exception to the First Amendment that applies only where “the speaker means to communicate a serious expression of an intent to commit an act of unlawful violence to a particular individual or group of individuals.” While the writer makes numerous disparaging comments about Jewish people, at no time does the writer express any intention to commit violence against them. While one post references the horrific history of the Holocaust (“GET THEM BECK [sic] IN THE GAS CHAMBERS WHERE THEY ALL BELONG”), it amounts to advocacy of genocide, not a serious statement of an intent to commit violence.

Second, the “mere advocacy of the use of force or violence does not remove speech from the protection of the First Amendment,” unless it meets the First Amendment test for unprotected incitement. That test leaves speech unprotected only where the speech is “directed to inciting or producing imminent lawless action and . . . likely to incite or produce such action.” Accordingly, the assertion of the “moral propriety or even moral necessity for a resort to force or violence” remains protected speech. Additionally, where speech is “not directed to any person or group of persons” in particular, it cannot be said to be an attempt at commanding or urging any person to take imminent action.

There is no reasonable likelihood the anonymous Greek Rank post, made to an indeterminate group presumably comprised of other IU students interested in IU Greek life, would lead those readers to immediately leave the website and undertake acts of violence.

Notably, while we have seen copies of these two posts above, it’s possible there are other posts that have yet to be publicly reported and which may indeed contain threats or other unprotected speech. But what we have seen so far does not fall below the threshold of what the First Amendment protects.

FIRE has submitted public records requests to both IU and IUPD hoping to learn more about, among other things, what pressure IUPD may have put on Greek Rank to delete the posts or identify the poster, and the content of IU’s internal conversations.

Meanwhile, we’ve given IUPD until close of business today to respond to our request that they cease attempts to identify the writer of the posts, and to clarify to the campus community that the university will not violate the law to get at unpopular (even very, very unpopular) speech that the First Amendment protects.