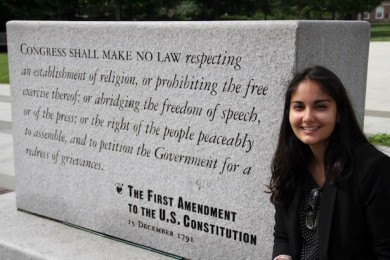 On her decision to join FIRE’s internship program this summer, Shafaq writes:

As a journalist on my college campus, I have developed a clear idea of the type of productive environment that can nurture and cultivate a community’s opinions and thoughts. Luckily, Brandeis University has afforded me and other members of the student body and faculty the forum to openly and actively voice our opinions without fear of retribution. University presidents for the past six decades have undoubtedly assured students that Brandeis is and always will be a facilitator of the important academic discussions necessary for continued intellectual growth. But while my own experiences in the past three years have certainly aligned with the promise of open and honest discourse that the university makes to every incoming first-year class, there is one blemish in Brandeis’ recent history that has unfortunately undermined its message.

I remember doing research for one of my columns for the school paper when I came across the Donald Hindley case on FIRE’s website. I felt like I had struck gold. Did other people know about this?

In 2007, Donald Hindley, a professor in the politics department, taught a class on Latin American culture. In that class, he allegedly used the term &quot;wetbacks&quot; in the course of an academic discussion. After said class, two students individually registered their concern for Hindley’s use of the word. In response to the complaints, the administration installed an administrator to monitor him as he continued to teach his classes. While the Committee on Faculty Rights and Responsibilities condemned then-Provost Marty Krauss and President Jehuda Reinharz’s handling of the case, neither the old administration nor the new administration under President Frederick Lawrence have issued an apology to Hindley for the admittedly fumbled investigation.

As a freshman, I wondered how this could have happened at Brandeis, the college where &quot;social justice&quot; is emblazoned on every university memo and instilled into every student. How could I be expected to carry and practice the principles of truth and justice the administration holds so close when they themselves so casually dispensed with them in this case? It was a stunning contradiction of the open-minded discussions my home institution (and many other universities) claims to be a priority on campus.

However, this case represents a much larger problem enveloping private and public colleges alike. Academic freedom and First Amendment rights are summarily violated and ignored. And yet, the general public and, perhaps more significantly, much of the population within higher education is unaware of these cases targeting tenured professors, students, and on-campus groups alike. Now, three years later, I join FIRE’s team of interns and hope to contribute to FIRE’s mission not only by exposing these violations but also by educating other students about the pervasive free speech violations on college campuses across the country.