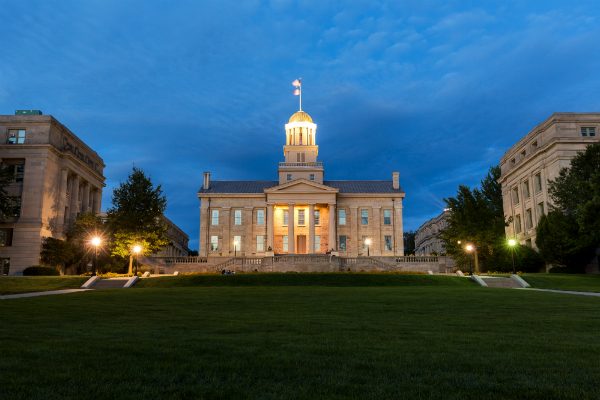 There is good news for free speech at Iowa’s public universities.

Meanwhile, the Faculty Senate at UI has done its own part by unanimously approving a policy statement that pledges its support for freedom of expression and academic freedom.

FIRE is pleased to see these developments and commends both bodies for taking significant steps towards cultivating free and open expression on campus.

The Board of Regents, State of Iowa — a nine-person governing board that sets policy for its member institutions —  recently adopted its freedom of expression policy in compliance with a state law, signed by Governor Kim Reynolds in late March. One of the “Guiding Principles” of the new policy states that “universities must strive to ensure the fullest degree of intellectual freedom and free expression allowed under the First Amendment to the Constitution of the United States.” The policy’s specific provisions do much to effectuate that goal.

First, the Regents’ policy prohibits member institutions from adopting speech codes, proclaiming that “[s]tudents, faculty, and staff have the freedom to discuss any problem that presents itself.” The policy explicitly recognizes that “[i]t is not the proper role of the Regent universities to shield individuals from speech … which may include ideas and opinions the individual finds unwelcome, disagreeable, or even offensive,” but rather to “encourage diversity of thoughts, ideas, and opinions.”

If those two provisions sound familiar, it’s because they are borrowed from the Chicago Statement, which FIRE has called the gold standard for campus free speech statements.

Second, the Regents’ policy states that “[n]o area of campus shall be designated as a free speech zone,” and instead designates all “outdoor areas of campus” as “public forums,” including for “spontaneous expressive activity.”

Third, the new policy prohibits state universities from discriminating against student organizations that hold a viewpoint disfavored by the campus administration, and from restricting student organizations from selecting only those leaders who affirm those groups’ beliefs and guiding principles.

FIRE previously covered a student organization’s lawsuit against UI for prohibiting the group from conditioning leadership positions based on disapproval of same-sex relationships, while permitting a different student group to condition the selection of its leadership based on approval of same-sex relationships. The Regents’ new policy should help prevent such viewpoint discrimination in the future.

And, of course, Iowa State was the target of one of FIRE’s initial Stand Up for Speech lawsuits in 2014. In that case, members of Iowa State’s student chapter of National Organization for the Reform of Marijuana Laws alleged that the university censored their T-shirt designs under pretextual justifications. The case ended with a federal district court entering judgment for the students and awarding nearly $600,000 in damages and fees, following a favorable ruling at the U.S. Court of Appeals for the Eighth Circuit. This type of result, too, should be prevented by the Regents’ new policy.

Faculty at UI add to the conversation

It’s not just the Board of Regents protecting campus free speech in Iowa. In late April, the Faculty Senate at UI unanimously adopted a statement that defends freedom of expression and academic freedom.

In this statement, the UI faculty affirm key tenets of freedom of expression in higher education that FIRE has long supported: that “speech that sparks strong disagreement or disapprobation is most in need of protection,” that “the exchange of strongly held views is part of the educational process,” and that “those who come to the university must be prepared to have their beliefs and expectations challenged, sometimes in ways they find offensive.”

The Faculty Senate’s statement also affirms the right of campus community members to openly inquire, declaring that “all faculty members, research professionals, and students must enjoy freedom of inquiry in research and creative endeavors, and must be free to teach and learn without fear that new or unpopular ideas will be stifled, or divergent viewpoints suppressed,” both “inside and outside the classroom or laboratory.”

UI professor Peter Snyder, who served as president of the Faculty Senate while it considered the statement, told FIRE: “These principles allow our students and faculty to explore new ideas and challenge accepted wisdom, and to teach and learn without fear that unpopular ideas will be stifled or divergent viewpoints suppressed. This statement serves as a foundation to guide our campus in responding to protests, controversial speakers, and other incidents that may arise.”

These initiatives are much needed at Iowa’s public universities. UI, Iowa State, and Northern Iowa all maintain speech codes that prevent them from earning FIRE’s highest, “green light” rating; all three institutions are currently “yellow light” schools. And UI and Iowa State have been on the losing side in the student group lawsuits referenced above.

Given this backdrop, FIRE commends the Board of Regents and the UI Faculty Senate for their recent actions. We are hopeful that all three public universities will now commit themselves to improving their policies and earning a green light rating. As always, FIRE is available to work with the schools to do just that. The end result, we hope, will be an improved campus climate for freedom of expression at all three institutions.