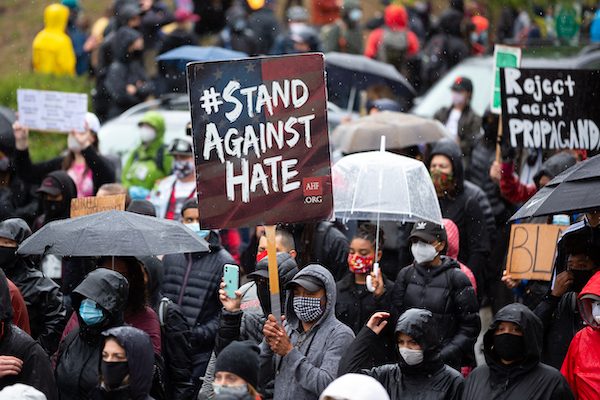 A recent survey from the Foundation for Individual Rights in Education found that a majority of Americans (57%) correctly recognize that the First Amendment protects hate speech from governmental regulation, punishment, or censorship — but 45% think that it should not be protected.

Why is hate speech protected?

The First Amendment makes no general exception for offensive, repugnant, or hateful expression.

In Snyder v. Phelps, the United States Supreme Court protected in an 8-1 decision the hateful speech of the Westboro Baptist Church — known for picketing military funerals with signs that read “God hates fags” and “Thank God for dead soldiers” — during a 2006 protest near the funeral of Lance Corporal Matthew A. Snyder, a Marine killed in Iraq. Federal courts even protected the free speech rights of Nazis, who in 1977 were denied a permit to march through Skokie, Illinois, a village where many former Holocaust survivors lived. (Although the Nazis prevailed in court, the march actually never took place.)

As FIRE has explained many times before, speech by adults as free citizens does not lose First Amendment protection because it is considered hateful. This is because hate speech in and of itself is protected speech, particularly when spoken by adults on their own time.

Not all hate speech is protected by the First Amendment, since hateful expression can fall within certain, narrow categories of unprotected speech such as:

If the hateful speech falls within one of these unprotected categories, then it is not protected by the First Amendment. If it falls outside these categories, then the speech will remain protected by the First Amendment in most contexts, with a handful of other narrow exceptions for public employees and institutions. For example, a public employer can discipline a public employee, like a police officer or firefighter, who hurls a racist invective at a citizen while on duty. Likewise, a public grade school official can punish a student for maliciously yelling a racial slur at another student in the hallway. Officials at K-12 institutions may reasonably believe that such speech would cause a material and substantial disruption of school activities and interfere with the rights of others.

The trouble with regulating hate speech

The First Amendment provides the greatest degree of protection to political speech, disallows discrimination against speech based on viewpoint, and generally prohibits the passage of vague or broad laws that impact speech. Laws must not sweep too broadly and must define key terms so that speakers know when their speech crosses the line into illegality.

A key problem with regulating hate speech, as free-speech scholars such as Nadine Strossen have identified, is that it remains difficult, if not impossible, to define exactly what constitutes hate speech. There remains an eye-of-the-beholder phenomenon with hate speech. Strossen writes in her book, “Hate: Why We Should Resist It with Free Speech, Not Censorship,” that “the term ‘hate speech’ is not a legal term of art, with a specific definition; rather it is deployed to stigmatize and to suppress widely varying expression.”

The First Amendment makes no general exception for offensive, repugnant, or hateful expression.

As Supreme Court Justice Oliver Wendell Holmes expressed so eloquently in his 1929 dissent in United States v. Schwimmer, “[I]f there is any principle of the Constitution that more imperatively calls for attachment than any other, it is the principle of free thought — not free thought for those who agree with us but freedom for the thought that we hate.”

Speech that demeans on the basis of race, ethnicity, gender, religion, age, disability, or any other similar ground is hateful; but the proudest boast of our free speech jurisprudence is that we protect the freedom to express “the thought that we hate.”

A free society must give much breathing space to hateful speech in order to avoid thought control and the censorship of unpopular views by the government. Instead of stifling free speech, we, as free citizens, have the power to most effectively answer hateful speech through protest, mockery, debate, questioning, silence, or by simply walking away.