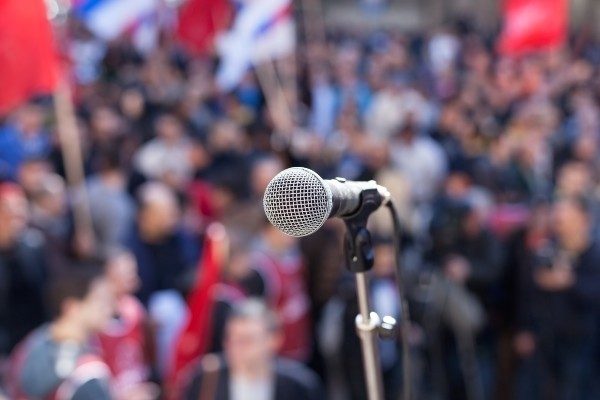 Looking for quick answers to your questions about political speech or campaigning on campus? Check out FIRE’s FAQ.

With the 2020 elections approaching, the Foundation for Individual Rights in Education (FIRE) strongly reminds colleges and universities that protecting robust political expression, debate, and peaceful protest on our nation’s campuses is vital to the health of our democracy. Students and faculty who wish to peacefully speak their minds on the 2020 election must not be silenced or censored.

As FIRE observed in 2008, 2012, 2016, and 2018, major election cycles are routinely marked by censorship of political speech on campus. In 2008, faculty and staff members at the University of Illinois were told that they could not participate in a wide variety of political activity on campus, including wearing a pin or button in support of a political candidate and placing partisan bumper stickers on their cars. That same year, University of Oklahoma students and faculty were informed that they could not use their university email accounts to disseminate any partisan or political speech, including “political humor/commentary.”

During the 2012 presidential election campaign, a student at Ohio University was forced to remove a flyer from her dormitory door criticizing presidential candidates Mitt Romney and Barack Obama. At Christopher Newport University, a student group was prevented from protesting a campus appearance by vice-presidential nominee Paul Ryan.

In 2016, FIRE wrote to American University and Georgetown University Law Center after each institution prevented students from campaigning for their chosen candidates on campus, mistakenly claiming that their institutional tax-exempt status under Section 501(c)(3) of the Internal Revenue Code required censorship of student political expression.

In 2018, FIRE successfully defended a faculty member investigated for protected political speech about former First Lady Barbara Bush, a student detained by campus security for passing out political flyers, and a coalition of student organizations denied funding by their student government because of their political expression.

Even in 2017—an off-year for federal elections—FIRE came to the defense of a student at the University of South Alabama who had been told to remove a “Trump/Pence 2016” campaign sign from his dorm room window by an administrator who cited the university’s 501(c)(3) status.

We do not expect 2020 to be any different. Sixteen years after issuing our initial election-year call to colleges and universities to “prove themselves as models for democratic discourse,” FIRE remains deeply concerned about the censorship of political speech on campus.

Whether due to viewpoint discrimination or confusion about Internal Revenue Service (IRS) requirements, silencing student and faculty political speech is unacceptable. In setting policy governing on-campus political speech, tax-exempt colleges and universities must heed IRS regulations, as well as state and federal law. Correctly interpreted, none of these legal authorities are in conflict with the crucial duty to uphold the First Amendment and basic principles of free expression on campus.

Students at public colleges and universities enjoy the full protection of the First Amendment and must be free to engage in political activity, expression, and association on campus.

Students at private colleges and universities are entitled to that degree of freedom of expression and association promised to them in institutional handbooks, policies, and promotional materials, or due to them by virtue of state law (as in California) or standards of accreditation.

The overwhelming majority of private colleges and universities provide extensive promises of free speech in their materials and are properly held to standards comparable to those required by the First Amendment. Of the 471 colleges and universities rated in FIRE’s 2020 report on campus speech codes, only six private institutions are listed as “Warning schools” for clearly and consistently stating that they hold certain values above a commitment to free speech.

Faculty at public colleges and universities enjoy a broad right to engage in political speech as private citizens and outside the parameters of their employment-related activities. Faculty members should be free to participate in political rallies on campus, express partisan messages outside of the classroom (for instance, by wearing political buttons), disseminate political speech via email, post political humor and commentary on their office doors, and more. (State laws may vary in terms of the protections they afford to political speech in the workplace.) Professors taking part in such activities should be understood to be speaking as citizens on matters of public import, not as faculty members acting pursuant to their job-related duties.

The list of activities in which faculty at public universities may not participate is comparatively narrow and easily understood. Faculty may be prevented, for instance, from fundraising in class, making statements in support of candidates or a party on university letterhead, or otherwise offering oral or written public support for a candidate or party in a manner that could be reasonably perceived as attributable to the university. (Again, state law varies in this area, so faculty should review state-specific requirements.)

Individual state constitutions, state case law, collective bargaining agreements, and faculty resolutions may provide additional protections or rights beyond those enunciated by the First Amendment or federal case law. Faculty members at public universities are encouraged to consult these sources when considering the scope of their speech rights on campus.

While working, faculty at private colleges and universities enjoy the right to free speech as specified in their contracts with their employing institution and relevant faculty policies. If an institution has promised its faculty expressive rights, the faculty members of private institutions may engage in partisan political speech without impacting the tax-exempt status of their institution when such speech is not likely to be perceived as officially representing the views of their employing institution. (Of course, when not working, private university faculty members enjoy the fullest protection of the First Amendment from government interference as private citizens.)

As a general rule, the presumption should be that faculty are not speaking on behalf of the university. It is possible to overcome this presumption, however, and faculty who serve in a joint administrative capacity are more likely to run afoul of rules preventing the appearance of official endorsement. (Note that non-faculty employees of universities may not enjoy the same political speech protections as students and faculty.)

While universities and colleges that are tax-exempt under Section 501(c)(3) of the Internal Revenue Code are prohibited from engaging in political activity as institutions, individual students, student groups, and faculty members do not endanger their institution’s tax-exempt status by engaging in partisan political speech when such speech is clearly separate and distinct from the institution’s views or opinions.

The IRS has consistently made clear that “[i]n order to constitute participation or intervention in a political campaign . . . the political activity must be that of the college or university and not the individual activity of its faculty, staff or students.” Likewise, with respect to students specifically, the IRS has noted that “[t]he actions of students generally are not attributed to an educational institution unless they are undertaken at the direction of and with authorization from a school official.”

The presumption is that the political activity of students and faculty does not represent the views of the university as an institution. Moreover, this presumption applies with particular vigor when speakers clearly indicate that they are not speaking for the university. The risk of the appearance of institutional endorsement may be greater when the speaker is a senior university administrator, but it decreases as one moves down the chain of command to lower-level administrators. Additionally, this risk does not apply to students or student groups, nor to faculty members without administrative roles.

As long as partisan political activity on campus by students and student groups is neither privileged nor hindered by the institution, and as long as partisan political speech by students and faculty does not overcome the strong presumption that they do not speak for the institution, then the tax-exempt status of universities and colleges will not be endangered.

Students, student groups, and faculty at public and private universities enjoy a robust right to engage in political expression on campus. This is as it should be: The right to express one’s mind about political questions is a vital component of civic participation in the United States, and our campuses are uniquely equipped to serve as the “marketplace of ideas.”

But too often—and particularly in election years—FIRE confronts censorship of political expression on campus. When students, student groups, and faculty members are inhibited in engaging in the political issues of the day, our democracy suffers. FIRE urges universities and colleges to carefully consider the crucial function our institutions of higher education play in fostering debate and discussion on the most important issues of our time and to greet with deep suspicion any legal interpretation or contrivance that would undermine this crucial role.

If you think your expressive rights might be threatened by a college or university, please contact FIRE.

American Council on Education, Political Campaign-Related Activities of and at Colleges and Universities (2018).