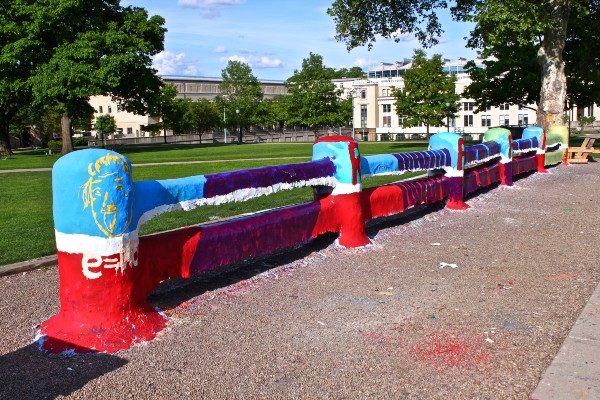 Repainted and papered over, sometimes for decades, free speech rocks, fences, walls, and myriad similar landmarks have long served as outlets for student expression on campuses across the nation. And for an equally long time, students with dueling viewpoints have attempted to make sure their messages on these objects come out on top — including by painting over their ideological opponents’ views with their own. But after the May 25 death of George Floyd and the protests it sparked, universities have responded troublingly by threatening to close these areas and prosecute students who communicate disfavored views. FIRE urges these universities to refrain from eliminating avenues for student expression merely because some find the expression objectionable.

Historically, the menagerie of campus objects students paint with their chosen messages has been surpassed only by the diversity of expression manifested through these monuments. Hosting a wide array of messages, such as sorrowful mourning of departed community members to jubilant celebration of campus events, these outlets for student expression are honored traditions at their institutions. James Madison University proudly proclaims that its free speech rock has served as “as an outlet for free expression” for over a decade, while the Carnegie Mellon University free speech fence served this purpose for more than 70 years, at one point holding the Guinness World Record for “the world’s most painted object.” Similar structures grace campuses throughout the country.

Yet, as with any forum featuring unfettered student expression, objectionable content has surfaced, too — prompting not only calls for punishment of the students involved, but also university threats to close the forums entirely. At James Madison University, for example, administrators promised in August to install security cameras to monitor their Spirit Rock, and are also considering discarding the rock. Likewise, Kent State University, upon complaints that “White Lives Matters” was written on its free speech rock last month, is “investigating several potential actions, including fencing off the Rock, installing security cameras and even the Rock’s removal.”

“As a follow up to Monday’s message about the defacement and vandalism of the Spirit Rock, the university has looked into it and at this point has not identified the person or people responsible for chiseling the paint off the rock, forcibly removing the word “Black” from a “Black Lives Matter” message. We will be installing cameras focused on Spirit Rock, and will be working with the student body and The Madison Society to develop guidelines for painting the rock, which is a space intended for free expression. This defacement and vandalism does not constitute free speech and is not acceptable. This incident is yet another reminder that there is much work to be done with regard to issues of racism and inclusivity at JMU and in our society. We stand with our Black students, faculty and staff in these ongoing efforts.” -Jonathan Alger, President -Art Dean, Executive Director, Campus and Community Access and Inclusion -Tim Miller, Vice President, Student Affairs -Dr. Heather Coltman, Provost and Senior Vice President, Academic Affairs

A post shared by James Madison University (@jamesmadisonuniversity) on Aug 19, 2020 at 9:26am PDT

As FIRE explained in our letters to these universities, free speech monuments are public fora located in open, outdoor areas of campus that have been traditionally and intentionally unburdened by university rules restricting student use, and fully dedicated to student expression. At public universities bound by the First Amendment, schools that offer such spaces may not retaliate against student speech based on its content, either by imposing restrictions, installing surveillance equipment, or closing the fora and removing them entirely. At private universities, their obligation to respect student speech is tied to the extent to which they promise those freedoms; both Carnegie Mellon and the University of Denver, for example, have opened their free speech landmarks in the context of broad promises of free expression.

FIRE urges universities to preserve their campus landmarks for student expressive use, even when it is difficult or unpopular to do so.

Of course, all universities are free to condemn hateful expression. But in their drive to create a more diverse, inclusive, educational community, they must recognize how closing avenues to student expression in response to distasteful speech harms these initiatives. The cornucopia of campus free speech landmarks serve as rallying points for student social justice movements — how exactly does fencing off these areas make campus a more tolerant place for students? Moreover, will universities seek to shut down listservs, bulletin boards, quads, and other open spaces merely because they are used to offend others?

While universities frequently advocate for closing platforms to hateful expression, they should be cognizant that every time a platform is eliminated because of a hateful speaker, students who would advocate against such messages are denied a platform, too. There is nothing diverse about a campus devoid of outlets for student expression.

As educational institutions approach the upcoming presidential election, where students will undoubtedly seek to engage in heated political debates, FIRE urges universities to preserve their campus landmarks for student expressive use, even when it is difficult or unpopular to do so.