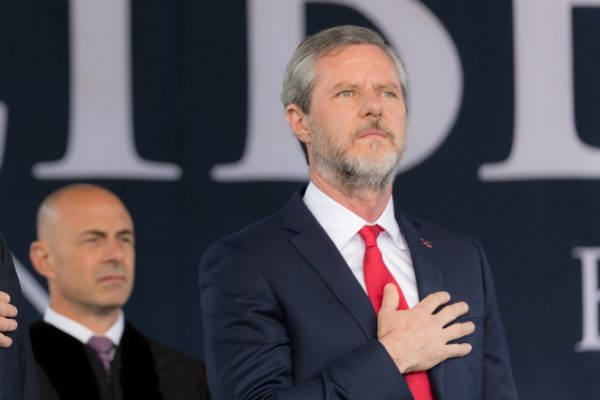 Last week, Liberty University President Jerry Falwell Jr. boasted that Liberty will “uphold freedom and put its ideals into practice,” recognizing in particular “Liberty students’ right to protest on campus grounds” and “freedom of the press” at Liberty. “Free speech and intellectual diversity are two of the most important pillars of a college education,” Falwell writes. Falwell’s pronouncement sought to push back on criticism of Liberty University — which found itself on FIRE’s 2019 list of worst institutions for freedom of speech — over its censorship of a student newspaper.

But what could have been a welcome embrace of students’ expressive rights was unfortunately marred by Falwell’s defense of his “right” to censor.

The dispute largely revolves around the Liberty Champion, a newspaper Liberty University has long held out as a student newspaper, describing it as “student-run” (over and over again), which the Champion’s masthead long echoed in alternating forms: “Student-managed since 1983,” and, more recently, “student run, student written, student produced.”

As detailed last fall by World Magazine, student journalists — reasonably believing they were joining a student newspaper — soon found that Liberty’s administration viewed them not as journalists, but as the university’s mouthpiece.

The Champion’s “editor-in-chief” role disappeared from the staff list, and a “consultant” from the administration — Scott Lamb, who also serves as Falwell’s personal press liaison — was added to the roster. The student editors were told that the university would assume the role of deciding what content would be published. After FIRE pointed out Liberty’s description of the Champion as “student-run,” the university scrubbed that reference from its website within a month. (Liberty still describes the newspaper as “student-run” elsewhere on its site, for now.)

Censorship, Falwell’s just-released ode to freedom of expression concludes, is his right, if he’s not too busy:

This year’s Champion students published over 650 stories and nearly 500,000 words. How many did I see before they went to print? I can count them on the fingers on one of my hands. Of course, I didn’t relinquish my right to read an advance copy, but I’ve got enough work to keep me busy and nobody brought anything of concern for me to see. If they had, I would have weighed in on the matter. I have a fiduciary responsibility to the Board of Trustees to provide leadership to this university, and I make no apology for taking my duties seriously.

It’s not clear whether Falwell is invoking a “fiduciary duty” to explain that he’s just too busy to censor or, instead, that he’s obligated by that duty to regulate a student newspaper’s content. If it’s the former, it hasn’t stopped him in the past. If it’s the latter, there is no fiduciary responsibility to censor student journalists, and doing so is more likely to create — not prevent — legal and reputational hazards for Liberty University. If the institution engages in prior review and censorship, it’s easier to attribute the act of publication to the institution, not to the student editors.

Having claimed this right, Falwell asks and answers a rhetorical question:

The question people ask about newspapers funded by private colleges is this: Do the students have complete autonomy to print anything they want? Of course not. Let’s give you a little insider baseball. There’s not a single university-funded campus newspaper published by a Christian institution of higher education in North America that publishes every word of news and opinion that the students draft.

At Liberty University, the answer is: the university’s administration. At most institutions, the decisions about what the student newspaper will cover and how they will write about it are, appropriately, left to the student editors, often with the assistance of faculty advisers.

That includes, contrary to Falwell’s pitch about “insider baseball,” Christian universities that fund their own student newspapers. In a recent survey of such institutions, the Student Press Coalition found that many Christian institutions do grant their student newspapers significant autonomy — but far too many do not. Of the surveyed newspapers, some 70% report that advisors or other employees hold some level of authority to limit coverage (whether they exercise it or not), and most say it’s fair to describe that authority as censorship. Some 30% report that their institution’s administration claims no such authority. Where would Liberty University rank? In the bottom third of surveyed institutions: 30% of surveyed newspapers reported that — like Liberty — their administration not only claims a right to censor, but has exercised it.

And, to be clear, the mere reservation of a right is a form of censorship, even if it’s not exercised. Falwell invokes a right to, at a minimum, prior review — that is, reading articles before they’re published. That wouldn’t pass muster under the First Amendment at public universities, and it’s viewed as censorship not only by students at private institutions, but by professional journalists’ organizations. But Falwell goes beyond prior review and instead exercises prior restraint: the right to prevent or edit a publication. That’s a form of censorship so reviled that it’s rarely permitted in any circumstance, and is said to be the very reason why the First Amendment was enacted. No defensible conception of “freedom of expression” authorizes prior restraint of student journalists.

Falwell justifies this by invoking other outlets’ views:

But that standard isn’t even attained within the newsroom of commercial newspapers and magazines. Do you recall reading pieces in The New York Times or Sojourners that gave a positive portrayal of the current White House Administration? Does The Chronicle of Higher Education print articles proving the prudence of not offering tenure to faculty? Does World, an evangelical magazine, publish pro-Planned Parenthood opinion pieces? Have you ever read a Cosmopolitan story urging chastity before marriage? In every case, the answer is no.

But this is wrong in its premise and its particulars. While any publication is free — through its editors’ choices — to present the views and narratives it prefers, journalistic enterprises don’t exempt their owners, benefactors, or publishers from criticism and coverage. For a recent example, see the Washington Post’s coverage of Amazon and Jeff Bezos, who owns both.

Moreover, justifying censorship on others’ perceived illiberalism is a zero-sum approach to freedom of expression. There will always be a censor somewhere that the censor-apologist can cite to justify his own illiberal bent. If someone tells you that censorship is permissible because others have censored, or that a new exception for speech is justified because there are other exceptions, they’re advocating abdication of rights.

Falwell cites, in part, his administration’s willingness to invite a diverse range of speakers to address the student body. That’s welcome, but it should not be mistaken for freedom of speech. As Falwell recognizes, “free speech and intellectual diversity” are separate concepts: the administration contributes to intellectual diversity by bringing in a range of differing speakers, but freedom of expression is a right of students and faculty to make their own choices in contributing to that diversity.

As a private institution, Liberty University is not obligated by the First Amendment to grant students or faculty any expressive rights. But if its leadership pronounces a commitment to freedom of expression, it must deliver on that promise. Falwell has an opportunity to lead by example — outpacing Christian and secular institutions alike in meaningfully extending freedom of expression — but it requires more than inviting diverse speakers.