A New York Supreme Court judge ruled Wednesday that Syracuse University ignored a number of its own disciplinary procedures when it suspended the Alpha Chi Rho fraternity in 2019.

SU had suspended the fraternity for a year after a non-student, who had been at the fraternity house earlier in the day, later shouted racial slurs at a woman off-campus. SU then overturned a “clear and well-reasoned decision” by its University Appeal Board fully clearing the fraternity of wrongdoing. In the nine-page ruling, Judge Scott DelConte described in stark detail how SU systematically violated its policies and appeared intent on punishing Alpha Chi Rho — even though the university both lacked the authority to do so and had clear evidence that its members were innocent.

“The record is clear,” Judge DelConte wrote, “Alpha Chi Rho did nothing wrong.”

DelConte held first that Syracuse had no initial authority to punish the fraternity or its members over allegations that someone who had visited the fraternity house  — but was not a fraternity member or even a Syracuse student — later that day shouted racial slurs off-campus.

There is no provision in the Fraternity and Sorority Affairs policy, or the Code of Student Conduct, that allows the University to punish fraternities for the independent, off-campus actions of former guests … Fraternities cannot police the statements of their former guests who leave campus, and it would be unreasonable to have, or apply, a policy that punishes fraternities, or other student social organizations, for conduct they cannot control. While the Courts will generally defer to a university’s interpretation of its own policies, such deference does not extend to “unreasonable or irrational” interpretations…

The university further erred when a senior SU administrator, E. Dolan Evanovich, unilaterally overturned an Appeals Board holding, which undertook a thorough review of the case and sided with the fraternity:

As the Conduct Board found, none of its fraternity members uttered any derogatory or racially offensive statements. Evanovich’s determination that the fraternity is nonetheless responsible for [the accused’s] alleged harassment – which occurred off-campus and was not witnessed by any fraternity members – has no rational basis.

Syracuse’s Post-Standard reports that Evanovich’s decision to overturn the Appeals Board’s ruling came “at the height of protests surrounding racist graffiti and other activity on campus that led to a long sit-in at the university’s administrative building” — suggesting university administrators may have been motivated to impose punishment as a means of answering students’ criticism. 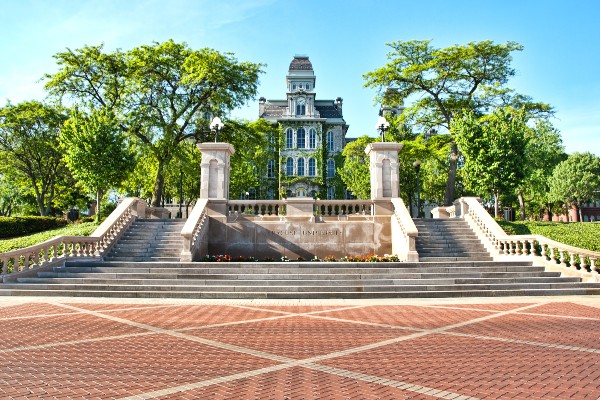 SU’s actions in this case, and the context surrounding them, suggest SU was facing intense pressure to address issues of racism and sexual assault on campus — and used Alpha Chi Rho as a scapegoat.

The opinion also faults SU for other due process failings, including its improper introduction of sexual assault allegations (against the non-student) during the disciplinary process against the fraternity members. SU subsequently violated procedures that should have allowed students to be advised by an attorney because the charges included allegations relating to sexual misconduct. The university forbidding the fraternity members from having an attorney advisor in the case, the judge wrote, “raises a serious question of undue prejudice” against the students.

SU’s actions in this case, and the context surrounding them, suggest SU was facing intense pressure to address issues of racism and sexual assault on campus — and used Alpha Chi Rho as a scapegoat. The holding also makes clear the university repeatedly sidestepped its policies and procedures to punish the fraternity in spite of evidence the group was not responsible for any misconduct whatsoever.

(Notably, after the initial incident in 2019, SU suspended all fraternity activities on campus — even those of minority fraternities. FIRE objected to the collective punishment at the time, explaining that the university’s response violated students’ freedom of association and assembly.)

In a statement late this morning, SU struck a defiant tone, but did not suggest it would appeal the ruling.

“We respectfully disagree with the court’s opinion. To be clear: students and student organizations are responsible for the conduct of the guests they bring to campus. In this particular case, the panel found that the guest engaged in a verbal assault on a member of our community. We will not tolerate hate on our campus – not from our community members and not from their guests. We will continue to hold the hosts of guests accountable, especially when their actions jeopardize the safety and well-being of our students.”

Yesterday’s judicial ruling is perhaps the highest-profile rebuke to date of Syracuse’s repeated unlawful violations of the promises it makes to students and faculty. FIRE will continue to monitor the state of civil liberties at Syracuse until its community members can be confident that the university will not violate their rights.