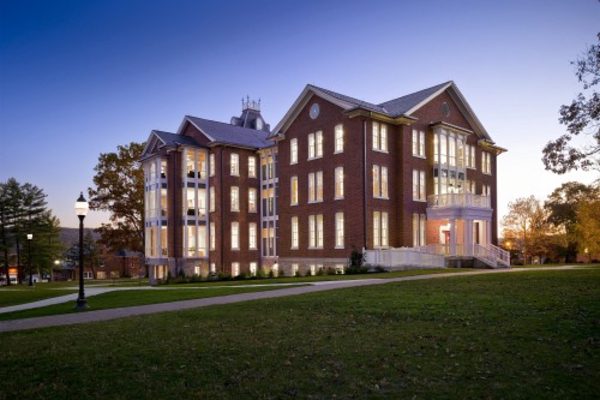 Last week, FIRE issued a statement on universities’ COVID-19 restrictions on speech and associational rights, spurred to do so by a number of recent cases where university responses to the coronavirus raise fundamental concerns for free expression and due process. As we wrote in our statement: “No legitimate institutional interest is served by policies that restrict students or faculty from commenting on issues concerning the coronavirus and institutional protocols[.]”

Juniata College’s administration could benefit from reading our statement, given the actions it has taken against tenured professor Douglas A. Stiffler, who criticized Juniata’s COVID-19 reopening plan in a comment on Facebook and now finds himself officially reprimanded by his institution. In sanctioning Stiffler, Juniata sets an alarming precedent for faculty expression at precisely a moment when openness and free exchange are essential to maintain public confidence. Juniata should withdraw its reprimand, and quickly.

As The Chronicle of Higher Education reports, Stiffler posted the comment to social media on Aug. 7, accompanying the link to a National Public Radio segment on campus COVID challenges. Stiffler’s comment read, in full: “As the result of Juniata’s decision to hold classes in person, it is quite possible that people who come on to Juniata’s campus will die, as will people in town. That is what is at stake.” Even after discussing the post with his department chair, who encouraged him to be careful with his social media posts but took no other action, Stiffler thought little of it, Chronicle reporter Megan Zahneis writes.

Then, however, Stiffler received an email from Provost Lauren Bowen, and things changed in a hurry. In a virtual meeting with Bowen, the provost informed Stiffler that a letter of reprimand was being placed in his employee file. As The Chronicle reports:

The college recognized Stiffler’s right to speak up, she wrote, but “when you state publically [sic] that Juniata’s decision could cause people who come to campus to die, you have gone beyond offering feedback on policy and are not exercising the restraint and respect expected of faculty.”

Zahneis also writes that “Bowen wrote in an email to The Chronicle that she feared Stiffler’s comment ‘would further incite fear and panic’ among students and in the local community.”

If Stiffler’s reprimand was disturbing to begin with, Juniata couching its rationale in the language of incitement makes it even more so, for multiple reasons.

If Juniata didn’t want the post to gain the amount of attention it has, then it could easily have avoided this predictable outcome by not sanctioning him in violation of his academic freedom rights for posting it.

First, Stiffler’s comment is, on its face, true: It is indeed possible that in spite of Juniata’s best efforts (its COVID operating protocols can be found at this link) to prevent the spread of COVID-19, persons on campus and in the community could contract the illness and die.

Second, even if Stiffler’s post is ominous, it’s well within the mainstream for commentary of this type, especially now. Stiffler’s post is a long way from the Supreme Court’s definition of incitement in Brandenburg v. Ohio, defined as speech that is “directed to inciting or producing imminent lawless action and is likely to incite or produce such action.” Heck, it’s a long way from the outmoded “fire in a crowded theater” chestnut so often bandied about and misquoted by censorship advocates. It simply strains credulity to argue that public order at Juniata somehow turned on Stiffler’s words. If Juniata didn’t want the post to gain the amount of attention it has, then it could easily have avoided this predictable outcome by not sanctioning him in violation of his academic freedom rights for posting it. 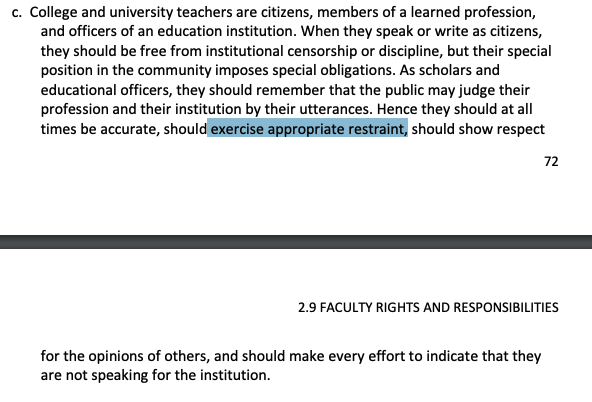 An excerpt from Juniata’s faculty manual.'

The basis of Stiffler’s sanction seems to reside in Juniata’s contention that in posting his comment, Stiffler failed to “exercise appropriate restraint.” That quoted language is from Juniata’s faculty manual, whose academic freedom provisions are based directly on the American Association of University Professors’ “1940 Statement of Principles on Academic Freedom and Tenure.” The precise definition of “appropriate restraint” under such a policy is, of course, a slippery one — which is why it is treated as aspirational, not an enforceable measuring stick applied to extramural speech. (See, for example, our recent letter to a Texas university president who also tried to make this argument.) Even leaving aside the unenforceability of that language, the precise contours of what a definition of “appropriate restraint” might entail are not ones that this post needs to spend time establishing, because if we are to concede that the language of Stiffler’s lone social media post falls on the wrong side of this provision, then faculty expression at Juniata is in a dire state.

While Stiffler’s post was made on social media, the real implications of Juniata’s action for faculty expression may not be in terms of their social media use, where faculty are generally speaking in their private capacities, but in their participation in campus governance, where they are speaking in their faculty roles. How universities are to adapt to COVID-19 and what the faculty role is to be in setting and executing such protocols is likely the preeminent governance issue in academia. Faculty who stand to be on the front lines in any campus opening plan need to be confident that they can be honest and forthright in their concerns, and they should not fear retribution for speaking bluntly in unprecedented times.

The Chronicle notes that Stiffler is weighing various options for addressing the reprimand letter on his file, including filing an official grievance. Juniata should save him the work and remove his sanction itself.