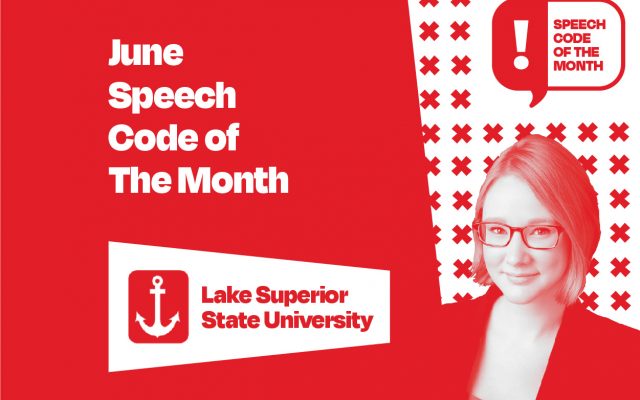 Students wishing to put up posters on campus at Lake Superior State University better choose their words carefully, as the public university’s posting policy threatens “disciplinary sanctioning” over material deemed “offensive, sexist, vulgar, discriminatory or suggestive.” The trouble with this policy is that anyone, for just about any reason, can claim that someone else’s speech is “offensive” or “suggestive.”

It’s not the first time this policy has earned that dubious honor: Seven years ago, FIRE made it our Speech Code of the Month, encouraging Lake Superior State to remove its unconstitutional, viewpoint-based criteria. Because the policy is still on the books, we’re again warning of the chilling effect it casts over the campus.

Speech cannot be limited by the government merely because it is found offensive, sexist, vulgar, or suggestive. These overbroad terms encompass a great deal of protected speech, since just about anything could be called offensive by someone.

For example, what if a student wants to post about a controversial issue like abortion, gun control, or critical race theory? The administration could claim that posters on all sides of those topics are “offensive” and deny a request to post them in order to avoid controversy.

Or what if a student group is going to be tabling with information about safe sex? A poster advertising that tabling could be called “suggestive,” but unless it meets one of the narrow exceptions to the First Amendment, discussion of sex is constitutionally protected.

And merely advertising the appearance of an invited speaker could be called “offensive,” depending on who that speaker is.

The policy’s terms are so vague that students are left guessing what could land them in trouble, and since the policy states that postings must be approved in advance, they’re left without other options.

As we said back in 2015, this policy is “completely inappropriate at any institution that claims to value free expression.”

Lake Superior State must revise its vague and overbroad terms and allow for students to post freely on campus.