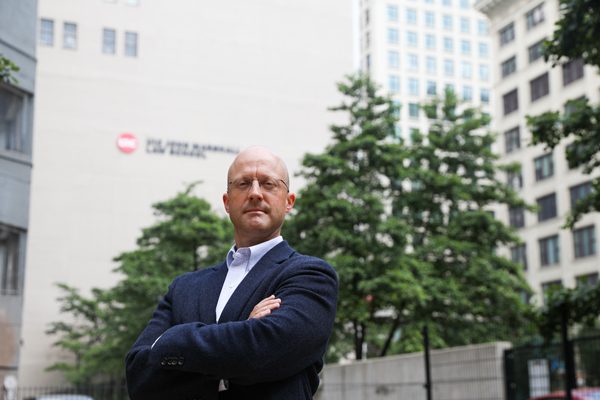 CHICAGO, Jan. 27, 2022 — Law professor Jason Kilborn forges ahead in the battle to vindicate academic freedom rights at University of Illinois Chicago, which punished him for a test question that included two redacted slurs.

Today, Kilborn filed a First Amendment lawsuit against UIC. He is represented by Wayne Giampietro, an attorney in the Foundation for Individual Rights in Education’s Faculty Legal Defense Fund network.

“The only thing that will hold UIC accountable for its unconstitutional actions is a lawsuit,” said Kilborn. “FIRE’s Faculty Legal Defense Fund gave me the strong medicine of real legal action, and UIC has given me no choice but to use it.”

UIC suspended and launched an investigation into Kilborn after he posed a hypothetical question — which he has asked in previous years — using redacted references to two slurs, in a December 2020 law school exam. The question about employment discrimination referenced a plaintiff being called “a ‘n____’ and ‘b____’ (profane expressions for African Americans and women)” as evidence of discrimination. But even redacting the terms didn’t save Kilborn from discipline by university administrators.

Kilborn reached a resolution with UIC in July, in which he agreed to alert the dean before responding to student complaints about racial issues and to audio-record his classes. Kilborn welcomed both of these stipulations in order to protect himself against spurious complaints, and had already decided to take those actions independently. As part of that resolution, Kilborn and UIC ultimately reached an understanding that Kilborn would not have to attend sensitivity training.

However, in November, under pressure from UIC’s Black Law Students Association and Jesse Jackson, UIC reneged on its agreement with Kilborn and is now requiring him to participate in months-long “training on classroom conversations that address racism” and compelling him to write reflection papers before he can return to the classroom. In a stunning display of unintended irony, the individualized training materials include the same redacted slur that Kilborn used in his test question (see page 5 for the redacted slur).

“UIC crucifies Kilborn for using a redacted slur, then turns around and forces him into anti-racism training that uses that same slur,” said Ronnie London, head of FIRE’s Faculty Legal Defense Fund. “Kilborn is effectively showing up to re-education and being handed his own text.”

By requiring Kilborn to submit to ideological re-education, not only has UIC violated his right to academic freedom, but it has also gone back on its original agreement with Kilborn.

“Kilborn did nothing wrong to begin with, but UIC has done everything wrong,” said Giampietro, Kilborn’s attorney. “UIC has proved itself to be both illiberal and disingenuous, and it’s past time to follow through on our threat of legal action.”

The Faculty Legal Defense Fund has assisted 20 professors since its launch in 2021.

“Professor Kilborn’s pedagogical choices fall squarely within the academic freedom that our fund was designed to protect,” said London. “The goal of the fund is to resolve matters through early intervention by our network of participating lawyers, before litigation becomes necessary — but in cases like Kilborn’s, litigation is the only appropriate response to administrative bullies who think they can ignore the First Amendment.”