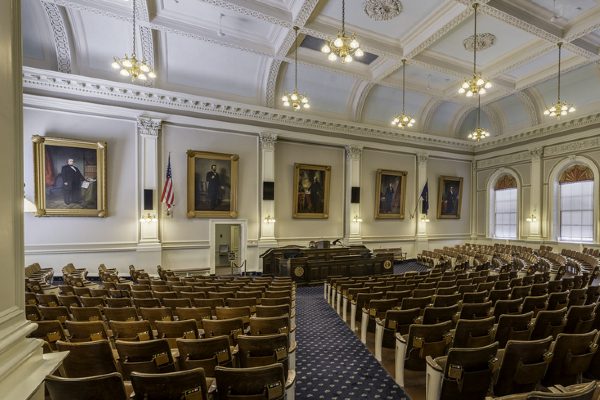 Last year, the White House issued an Executive Order on Combating Race and Sex Stereotyping that FIRE warned could create a chilling effect on how race and sex would be taught and discussed at institutions of higher education. The executive order instructed federal agencies to condition grants they administer on the recipient institution’s certification that it will not use those funds to “promote” interpretations of race and sex stereotypes that the administration deems “divisive.” It then set forth a list of the ideas on race and sex that it deemed divisive.

The bills all pose significant threats to academic freedom, and none of them should be enacted — at least not in their current forms.

The executive order was subsequently repealed by President Biden, which has led Republican state legislators in several states, including Arkansas, Iowa, New Hampshire, and Oklahoma, to introduce legislation that would similarly regulate campus discussions of race.

While these bills are not identical, they all pose significant threats to academic freedom, and none of them should be enacted — at least not in their current forms.

In February, FIRE wrote about the constitutional problem with the Arkansas bill. Today, we’ll provide analysis of the other bills. Before diving into these proposals, it’s important to discuss academic freedom and the decades of judicial precedent confirming its critical importance to the success of higher education.

In the landmark 1957 case Sweezy v. New Hampshire, a plurality of the Supreme Court of the United States explained why defending academics from government intrusion is so critical:

The essentiality of freedom in the community of American universities is almost self-evident. No one should underestimate the vital role in a democracy that is played by those who guide and train our youth. To impose any strait jacket upon the intellectual leaders in our colleges and universities would imperil the future of our Nation. No field of education is so thoroughly comprehended by man that new discoveries cannot yet be made. Particularly is that true in the social sciences, where few, if any, principles are accepted as absolutes. Scholarship cannot flourish in an atmosphere of suspicion and distrust. Teachers and students must always remain free to inquire, to study and to evaluate, to gain new maturity and understanding; otherwise, our civilization will stagnate and die.

A decade later, in Keyishian v. Board of Regents, the Supreme Court further enshrined the need to protect academia from governmental interference when it identified academic freedom as “a special concern of the First Amendment, which does not tolerate laws that cast a pall of orthodoxy over the classroom.”

“Our Nation is deeply committed to safeguarding academic freedom,” the Court reasoned,  “which is of transcendent value to all of us and not just the teachers involved.”When a government actor prevents certain materials from being taught, it violates the principles of academic freedom and runs afoul of the Supreme Court’s holdings in Sweezy and Keyishian.

Oklahoma’s HB 1641, which applies to both public K-12 schools and institutions of higher education, states: “No public school or state educational institution shall require or offer a curriculum that promotes or degrades any race, gender or sexual orientation.”

FIRE takes no position on the bill’s application in the K-12 context, where states generally have broader authority to set curricula, but the provision’s application to institutions of higher education has troubling ramifications for academic freedom.

As the Supreme Court of the United States held in Grayned v. City of Rockford, in order to be constitutional, a statute must provide “persons of ordinary intelligence a reasonable opportunity to know what is prohibited, so that he may act accordingly.” Legislation that fails this test is unconstitutionally vague. Yet reasonable minds can and do differ on what arguments degrade or promote a race, gender, or sexual orientation. And because “degradation” is a largely subjective, non-legal term, college professors putting their curricula together have no way to know what they can teach regarding those topics under this proposed legislation.

Consider the bill’s prohibition on any curriculum that “promotes” one race, gender, or sexual orientation. This prohibition is subjective and vague, and may have unintended effects to boot. Does teaching about the accomplishments of African Americans as part of Black History Month count as promoting a race? Can anyone categorically say that it does not?

Furthermore, as written, the bill makes even teaching about certain points of view a risky endeavor. Would a World War II class that features readings from Mein Kampf, or a Civil War class with selections from those opposed to the abolition of slavery, run afoul of this proscription? The authors of such readings certainly promote beliefs that nearly all Americans find offensive and abhorrent, yet understanding these historical figures can be an important and legitimate part of the curriculum. But if you were a faculty member, under this law, would you risk it?

New Hampshire’s HB 544 prohibits “agencies and political subdivisions of the state of New Hampshire, including counties, cities, towns, school districts, and the state university system” from “teach[ing], instruct[ing], or train[ing] any employee, contractor, staff member, student, or any other individual or group, to adopt or believe any of the divisive concepts defined in [the Act].”

Right off the bat, HB 544’s prohibition on teaching concepts that it labels “divisive” is in clear violation of the “bedrock principle underlying the First Amendment,” as set forth by the Supreme Court of the United States in Texas v. Johnson, “that the government may not prohibit the expression of an idea simply because society finds the idea itself offensive or disagreeable.” Likewise, a law forbidding the teaching of divisive concepts is precisely the kind of law that the Keyishian Court said the First Amendment does not tolerate because it “would cast a pall of orthodoxy over the classroom.”

Moving on, the viewpoints that the legislation condemns and prohibits as divisive are:

(b) The state of New Hampshire or the United States is fundamentally racist or sexist;

(c) An individual, by virtue of his or her race or sex, is inherently racist, sexist, or oppressive, whether consciously or unconsciously;

(d) An individual should be discriminated against or receive adverse treatment solely or partly because of his or her race or sex;

(e) Members of one race or sex cannot and should not attempt to treat others without respect to race or sex;

(f) An individual’s moral character is necessarily determined by his or her race or sex;

(g) An individual, by virtue of his or her race or sex, bears responsibility for actions committed in the past by other members of the same race or sex;

(h) Any individual should feel discomfort, guilt, anguish, or any other form of psychological distress on account of his or her race or sex; or

(i) Meritocracy or traits such as a hard work ethic are racist or sexist, or were created by a particular race to oppress another race.

To be clear, federal anti-discrimination laws, namely Title VI of the Civil Rights Act of 1964 (Title VI) and Title IX of the Education Amendments of 1972 (Title IX), already prohibit institutions of higher education from creating a discriminatory hostile environent on the basis of race, color, and national origin or on the basis of sex, respectively, and many states have similar anti-discrimination laws on the books. For the state to subject students or faculty members to trainings asserting most of the specific propositions identified in the bill would likely violate these state and federal anti-discrimination laws by creating a discriminatory hostile environment. This legislation is, therefore, not needed to solve that problem.

By contrast and design, however, individual faculty members’ advancing controversial ideas does not run afoul of anti-discrimination law and is instead protected by academic freedom. Yet the bill prohibits not just training but also teaching and instruction of these “divisive concepts” with one insufficient exception: The bill would allow “discussing, as part of a larger course of academic instruction, the divisive concepts listed in [the Act] in an objective manner and without endorsement.”

Academic freedom does not allow for the government to attach conditions on how controversial ideas can be taught. The government, for example, could not say that college science faculty can only cover evolution if they do so in an objective manner without endorsement. Academic freedom protects the rights of faculty to assert positions as they see fit.

Iowa’s SF 478 contains provisions similar to those found in New Hampshire’s HB 544. It includes the same list of ideas labeled as “divisive concepts.” As is the case with the New Hampshire bill, legislatively labeling ideas as “divisive” runs a terrible risk of chilling protected speech. The Iowa legislature would be wise to amend the bill to delete the word “divisive” and potentially replace it with a more neutral word, like “specific.”

Fortunately, the Iowa legislation makes an important distinction that is lacking in New Hampshire. The bill’s prohibition on teaching or advocating for the divisive concepts only applies in the context of mandatory staff or student training. Moreover, the bill expressly states that it shall not be construed to:

Inhibit or violate the first amendment rights of students or faculty, or undermine a public institution of higher education’s duty to protect to the fullest degree intellectual freedom and free expression. The intellectual vitality of students and faculty shall not be infringed under this section.

This language provides a safe harbor for students and faculty to discuss and even advocate for any of the ideas singled out in the bill. Of the bills discussed here, Iowa’s is the one that can be most easily fixed to avoid the constitutional and academic freedom concerns that plague the bills being discussed. However, as with New Hampshire’s bill, most of what it would prohibit in training sessions is already prohibited by antidiscrimination laws.

College campuses must be places where faculty and student discussions of racial and sexual inequality are unencumbered from government interference. In order to ensure that faculty and students have the necessary freedom to explore these issues, legislatures need to avoid statutorily deciding how those issues are taught on campus.

To the extent that some institutions may be staking positions in their mandatory training programs that create hostile educational environments by stereotyping on the basis of protected classes, an effectivce remedy already exists under existing anti-discrimination law.