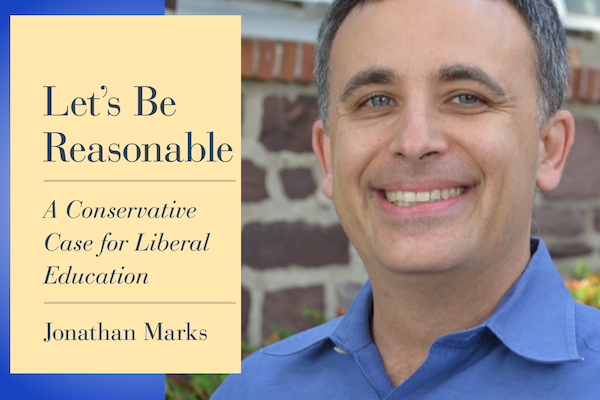 I received my copy of “Let’s Be Reasonable,” by Ursinus College professor Jonathan Marks, right around the time it came out. That was, alas, in February. So why write about it now?

For one, it’s a self-effacing and frequently humorous read that provides an easy entryway into some of higher education’s thornier cultural debates. For another, despite having sat on my desk this whole year (during which time I’ve read it through at least twice as I tried and failed to clear enough runway to write a response) its central propositions have only become more salient.

The book’s full title is “Let’s Be Reasonable: A Conservative Case for Liberal Education.” From the subtitle you get a couple of important pieces of information. One, you understand the direction on the political compass from which Marks, a political conservative, is making his case. Two, you get a sense of who he’s ultimately hoping will find his reasoning persuasive: his fellow conservatives, who he sees increasingly losing faith in the promise of higher education.

❔What is the role of reason in higher education? Do colleges have an obligation to actively promote a diversity of ideas on campus?

This was the enthralling questions addressed at @unecgh with Jonathan Marks, Chair of Politics and International Relations at Ursinus College. pic.twitter.com/HOqTGY4Y6e

As a nonpartisan, nonprofit organization, FIRE doesn’t approach these issues from either a liberal or conservative perspective. Our mission is the defense of free speech and academic freedom, not of liberal education, per se. That does not mean, however, that FIRE doesn’t have a rooting interest in liberal education — “liberal” here being emblematic of a philosophy through which education helps us consider larger, more fundamental questions and, in Marks’ words, “be familiar with the pleasure, usefulness, and freedom of conversing about those questions.” You could fairly say that our mission and its appeal to the university as the “marketplace of ideas” presumes a strong belief in liberal education. And while Marks may be making a “conservative” case for liberal education, it comes from the conviction that too much of higher education has become politicized at the risk of obscuring fundamental values that people of all stripes should see the virtues of.

There’s an easy, conversational style to “Let’s Be Reasonable,” which in its less than 200 pages has ample references to Plato, Aristotle, Saint Augustine of Hippo, John Locke, Jean-Jacques Rousseau, Alexis de Tocqueville, and John Stuart Mill, among others. Marks’ reference points show his cards as someone who has spent his academic career, as he puts it, “study[ing] old books.” But his concerns are modern. He worries about the intellectual stagnation and intolerance that can result as the ranks of conservative professors dwindle ever further, for instance. He worries about increasing attacks on the legitimacy of higher education, and that universities are failing to make the best case for themselves in the face of such attacks.

Above all, he worries that universities, and too many of their faculty with them, have lost sight of the value of turning out “reasonable” students.

So what does it mean, in Marks’ view, to become “reasonable”?

He posits that being reasonable requires, among other things, a certain intellectual humility about the strength of one’s own positions in the face of evidence that might undermine or disprove them. It calls for people to see reason as a good in itself and not just a cudgel that can be used to force one’s rhetorical opponents into submission. It asks that when we engage an argument we disagree with, we start that engagement at the argument’s strongest, most compelling points, rather than searching for a technicality or inconsistency we can use to write off the argument (or the speaker) in full. And it requires a capacity to feel shame when we fall short of these standards.

This last point is especially important for Marks. “What’s lacking, for the most part, outside of some individual classrooms,” he writes, “is a standard of praise and blame according to which it’s shameful to close one’s mind.”

Marks’ proposition that colleges and their faculty put more of themselves into shaping “reasonable” students is an eminently modest one.

And perhaps bucking the concerns of some of his fellow conservatives bemoaning indoctrination by left-leaning faculty, this is an area where Marks believes faculty have a strong role to play in modeling this behavior for students.

Marks’ proposition that colleges and their faculty put more of themselves into shaping “reasonable” students is an eminently modest one. It won’t solve all of the structural challenges of higher education, but it lessens the chances that some of the worst embodiments of unreasonableness, for lack of a better term, will rear their heads.

We might avert some of the ugly spectacles of student intolerance that we saw at Yale in Nicholas and Erika Christakis’ case and at Evergreen State College in Bret Weinstein’s case (both of which Marks briefly touches on). The vitriol with which an alarming number of students thought it was plainly acceptable to treat these faculty was shameful, and shameful again for the fact that the students didn’t consider it shameful. If, as Marks argues, “[t]he highest aim of liberal education is not a set of skills but a kind of person” — specifically, a reasonable person — then instilling a proper degree of shame in students is a worthy goal.

The dark side of the moon

You review the book you have and not the book you wish you had, but I couldn’t help thinking what a different book “Let’s Be Reasonable” might be if Marks had written it a year later. Lord knows, that extra year would have given him plenty of material.

Every book that takes on contemporary cultural and political affairs must go through that “dark side of the moon” phase of the publication cycle, wherein the book is locked in and slogging through the final steps to printing and publication while its arguments remain sensitive to real-time events. By the time “Let’s Be Reasonable” landed in early 2021, higher education had been convulsed, first by the COVID-19 pandemic, and perhaps more significantly by the nationwide protests over racial injustice and police brutality seen in the summer of 2020. During this time, passions over the issue quickly overheated and numerous students and faculty found themselves subject to investigation and punishment for even mildly upsetting expressions on matters of race, contributing to the busiest summer in FIRE’s history.

Many states have introduced legislation to limit or prohibit the teaching or training of so-called “divisive concepts” at public colleges.

As introduced, many of the bills threaten free speech and academic freedom.

And then there’s been the political backlash, seen most potently, perhaps, in the surge in legislative efforts to ban “critical race theory” (to use the term broadly) from K-12 classrooms and, in some cases, in higher education. FIRE has criticized numerous such attempts to pass this kind of legislation as unconstitutional and has written extensively on the predictable effects of such laws creeping into college classrooms in Iowa and Oklahoma. One such proposed bill in Wisconsin went so far as to explicitly ban certain words and terms from instruction — such as “woke,” “whiteness,” “inclusivity,” “multiculturalism,” and much more.

As Marks, no adherent of critical race theory himself, would say: Be reasonable. In a July post for Commentary magazine, where Marks regularly blogs, he urged against censoring classroom content, noting that he sometimes teaches critical race theory alongside competing texts and interpretations. This is in-character for Marks; he makes clear in “Let’s Be Reasonable” that he rejects what some have called anti-“David French-ism,” named for the conservative commentator (and former FIRE president) David French, who argues that fidelity to liberal principles, and not aggressive government intervention, is the best way to fight illiberalism in our institutions.

This question has only become more pertinent in the time since Marks committed it to paper.

If the last couple of years has driven any single point from Marks’ book home, it’s the extent to which politics — a term I use broadly to encompass not only the pursuit of certain political outcomes, but more generally the prevailing of one orthodoxy over another — is the natural antagonist of reason.

As Marks correctly observes, the virtues of reasonableness are things that politics quite often makes a virtue of ignoring.

“We bend all our efforts toward winning a political argument, even when those efforts cause us perversely to assert untrue or grossly exaggerated things,” he writes.“When that happens, something has overcome in us the widely shared opinion that it debases a person to stray so far from good sense.”

And while I won’t put the onus of what ails higher education squarely on politics, many controversies we’ve seen over the years acquire a certain logic if we consider them as exercises in politics. This isn’t a good thing. Take the recent cancellation of a lecture by University of Chicago geophysicist Dorian Abbot at MIT, over Abbot’s previous writings criticizing university diversity, equity, and inclusion initiatives — never mind the fact that the lecture had nothing whatsoever to do with his views on DEI issues. MIT was widely criticized for the cancellation (including by FIRE), because such cancellations are unworthy of institutions committed to free speech and academic freedom. To the person viewing this event in political terms, however, MIT’s action might make perfect sense. One professor quoted by the Boston Globe in support of the disinvitation argued, “It’s almost schizophrenic, in a way, to have a diversity statement and to invite somebody who espouses these views.”

The final chapter of “Let’s Be Reasonable” consists of a case study of the Boycott, Divestment, and Sanctions movement — a good one if we’re looking for examples of issues where passions can overtake reason. (FIRE views some aspects of the BDS movement as incompatible with key tenets of academic freedom, but has repeatedly defended pro-BDS speakers and criticized legislative efforts targeting BDS as unconstitutional on First Amendment grounds.)

Many controversies we’ve seen over the years acquire a certain logic if we consider them as exercises in politics.

Marks charts a number of the rhetorical and strategic excesses of the movement, on both sides, but ends on what might be a note of hope. When the American Historical Association was asked to vote on a resolution put forward by a pro-BDS contingent, critics of the measure disputed the factual claims made in the resolution, arguing some of them weren’t supported by their own footnotes. (I don’t take a position here on the merits or factuality of the resolution myself.) This may have played a role in swaying the vote, which ultimately went against the resolution by a more than two to one margin.

Whatever one’s view of BDS, there’s a bigger point being made that people on all sides should consider. When we bring a scholarly approach to matters of politics, we stand a decent chance of making our politics better. The inverse is much less likely to be true.