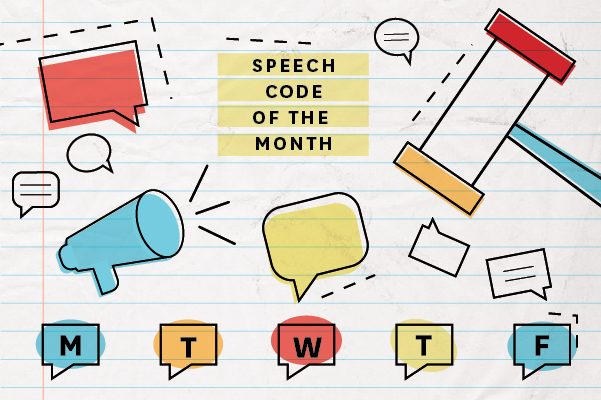 It’s not rare for colleges to contradict themselves on free speech, making sweeping declarations of free speech rights to their students while simultaneously maintaining policies that infringe on those rights. It is rare for a school to make this contradiction in a single sentence, but the University of Wisconsin Oshkosh does just that, making it FIRE’s Speech Code of the Month recipient for May.

All members of the University have a responsibility to promote and a right to expect … an environment that is free of harassment and free of insulting and demeaning comments and epithets based on race, ethnicity, gender, religion, sexual orientation, age, disability, military status, socioeconomic status, family status, or political views; and consistent enforcement of federal, state, and university protections against discriminatory treatment yet is free from any official speech codes.

So students have a right to expect an environment free from insulting and demeaning comments and from any official speech codes? Those principles are incompatible, earning the policy FIRE’s worst, “red light” rating.

UW Oshkosh needs to clear this up.

FIRE defines a “speech code” as any university regulation or policy that prohibits expression that would be protected by the First Amendment in society at large. That means UW Oshkosh’s policy itself is, in fact, a speech code!

Comments that individuals find insulting or demeaning on the basis of particular characteristics are typically protected by the First Amendment, as the Supreme Court has made clear speech can’t be restricted on that sole basis. Such comments could be a part of speech or conduct that isn’t constitutionally protected, like a “true threat” made about a particular group. But a policy that effectively bans all subjectively insulting comments is overbroad, as it also encompasses a great deal of protected speech, such as a tweet debating the position of another political club on campus.

The policy expands on this contradictory principle by stating: “Upon observing discriminatory behaviors or hearing offensive comments, every reasonable effort is made to protect the victim(s) and witness(es) from further harassment.” Does that mean that the university will respond to any instance of purported “offensive comments,” whether they are a part of a pattern of conduct that constitutes harassment or not?

UW Oshkosh needs to clear this up.

FIRE’s Policy Reform team, which works with universities to revise their policies so that they better protect students’ free speech, recently launched our “Model Speech Policies” resource, which includes FIRE-recommended policy language for specific types of speech codes we routinely come across. (You’ll notice we didn’t use the term “Model Speech Codes” for the resource — there is no model way to restrict speech that would be protected by the First Amendment in society at large!)

To provide an example of a statement of community principles for that resource that does not restrict protected speech, we chose a policy at the University of Southern Mississippi, the “Southern Miss Standard.” The policy does state in its list of shared principles that “[i]mplicit within the Southern Miss Standard is … A respect for language that is appropriate, never obscene, and neither demeans nor intimidates.” However, the following explanation precedes that list:

The Southern Miss Standard was developed to embody the values we hope residents possess. At the same time, the university is strongly committed to freedom of expression. Consequently, these principles do not constitute university policy and are not intended to interfere in any way with a resident’s personal freedoms. We hope, however, that residents will voluntarily endorse these common principles, thereby contributing to the traditions and scholarly heritage left by those who preceded them, and will thus leave Southern Miss a better place for those who follow.

With that introduction, the university makes clear to students that, while it does encourage the adoption of certain values, including respect for language that is not demeaning, the university is also strongly committed to students’ freedom of expression, and these values do not constitute university policy.

UW Oshkosh would do well to adopt similar language in its Shared Principles policy (and to revise its other restrictive policies) so that students can be sure they’re not subject to an official speech code after all.