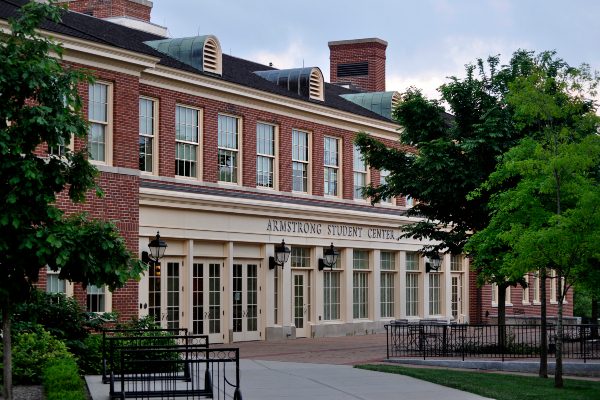 Miami University, a public university in Oxford, Ohio, traces its origin all the way back to an act of Congress signed by President George Washington in 1792. Known early on as the “Yale of the West,” Miami’s storied history includes a “Snowball Rebellion,” a campus Robert Frost once proclaimed to be the most beautiful he’d ever seen, and students who went on to become football legends, Civil War generals, a U.S. poet laureate, and even President of the United States.

Miami alumni have played central roles in the story of our nation, and surely the university’s leadership hopes they continue to do so. It’s therefore concerning that a university task force recommended this month that Miami deliberately disregard the First Amendment rights of its students and faculty.

In June, Miami President Gregory Crawford commissioned a Diversity, Equity, and Inclusion Task Force, composed of students, faculty, administrators, and others, including the school’s head football coach and the mayor of Oxford. Over a seven-week period, the Task Force produced a series of recommendations. Many recommendations are beyond FIRE’s purview, like the proposal to establish or expand Miami’s relationships with public schools in Cincinnati, Dayton, and Cleveland. Others appear to call for facilitating continuing dialogue amongst students, faculty, and staff, a generally commendable “more speech” approach.

But one recommendation is deeply concerning.

Recommendation 9 of Pillar 3 (“Advocacy and Partnerships”) calls on Miami to “explore the adoption of a zero-tolerance anti-discrimination policy and strictly enforce its existing University policy on discrimination.” Specifically, the recommendation calls for Miami to demonstrate “moral courage” by discounting the “fear of First Amendment violations” in disciplining students and faculty:

As a public institution of higher education, Miami University should demonstrate moral courage when defending its interest in having an efficient and disruptive-free work environment. Student dismissal or employee termination should not be shied away from because of fear of First Amendment violations. Case law dictates that a balancing test regarding private citizen’s 1st amendment right vs public institution interest in an efficient and disruptive-free work environment (Connick v. Myers, 461 U.S. 138, 1983; Dixon v. University of Toledo, 702 F.3d 269, 6th Cir. 2012; Locurto v. Giuliani, 447 F.3d 159, 2d Cir. 2006; Pickering v. Board of Education, 391 U.S. 563, 1968). The key legal factors (e.g., avoiding disruptions in regular operations, maintaining good working relationships among coworkers, avoiding erosion of working relationships dependent on confidence and loyalty, avoiding obstructions in employees’ abilities to perform their work) favor Miami’s case for an efficient and disruptive-free work environment.

As an initial matter, the recommendation conflates student First Amendment rights with faculty and employee First Amendment rights, incorrectly suggesting that student speech is analyzed under the same legal standards that govern public employee speech. Students at public universities enjoy broad First Amendment rights on campus; they may not be punished for their protected speech simply because Miami believes censorship would help maintain “an efficient and disruptive-free work environment.” As the Supreme Court put it nearly a half-century ago in Healy v. James, “the precedents of this Court leave no room for the view that, because of the acknowledged need for order, First Amendment protections should apply with less force on college campuses than in the community at large.”

It does not take moral courage to punish protected but unpopular, dissenting, offensive, or even loathsome speech. Rather, it takes moral courage to respond to such speech without punishment, trusting instead in the power of dialogue, reason, and truth to change minds and win out.

Turning to faculty, the recommendation suggests Miami’s institutional interests will generally prevail over the interests of faculty members speaking as private citizens on matters of public concern, because “key legal factors (e.g., avoiding disruptions in regular operations, maintaining good working relationships among coworkers, avoiding erosion of working relationships dependent on confidence and loyalty, avoiding obstructions in employees’ abilities to perform their work) favor Miami’s case.” But this is an oversimplification of a legal balancing test that is highly dependent on the specific contextual considerations of an individual case; Miami’s institutional interests won’t always “favor” the discipline of faculty for speaking their minds as private citizens. (We suggest Miami review FIRE’s defense of Rutgers University professor James Livingston for an example of just such an outcome.)

But setting aside the case law, and the recommendation’s cavalier attitude toward the First Amendment rights of its students and faculty, the most worrying aspect of Miami’s proposal may be its equation of censorship with “moral courage.” It does not take moral courage to punish protected but unpopular, dissenting, offensive, or even loathsome speech. Rather, it takes moral courage to respond to such speech without punishment, trusting instead in the power of dialogue, reason, and truth to change minds and win out.

As Miami considers this recommendation, we urge it to follow the example of former Univeristy of California President Mark Yudof who, in 2012, received a similar recommendation from a task force convened to respond to campus anti-Semitism. Specifically, UC’s Advisory Council on Campus Climate, Culture and Inclusion urged Yudof to “accept the challenge” of First Amendment litigation by “push[ing] its current harassment and nondiscrimination provisions further, clearly define hate speech in its guidelines, and seek opportunities to prohibit hate speech on campus.”

After FIRE warned President Yudof of the legal risk and moral folly of censorship, he made clear to both the UC community and to FIRE that he did not think violating the First Amendment was a viable response to hateful speech:

I will … ask the Vice President for Student Affairs and the General Counsel at the Office of the President to review the policy recommendations included in both reports and to submit to me their analysis. I must say, however, that I believe our current policies may go as far as they can, given constitutional limitations. As I have said before, I will continue to be the first to defend our students’ and faculty’s right to free speech under the U.S. Constitution.

None of this is designed to stifle free speech, but rather to ensure that our campuses are welcoming to a broad diversity of students, faculty, and staff. While hurtful speech may make that goal difficult to achieve at times, I want to reaffirm that the answer is not to restrict speech, but rather to see that all our community members feel supported by the University and able to take full advantage of the educational opportunities we offer.

Miami, a public university nearly as old as the First Amendment itself, should do the same.