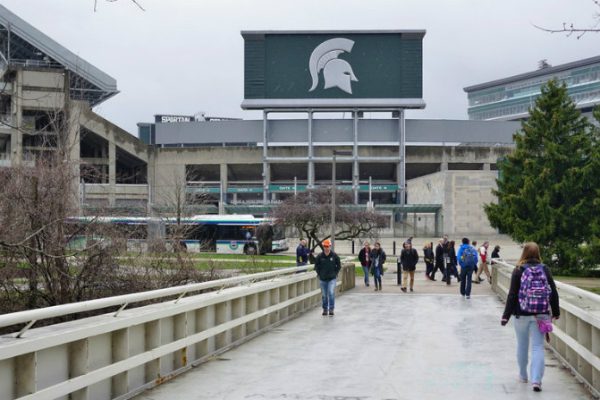 After a series of courts held that public entities may violate the First Amendment when they restrict content or access to their social media accounts — and after a lawsuit by PETA and the Electronic Frontier Foundation revealed that Texas A&M had blocked criticism by animal rights activists — we here at FIRE got curious. So we sent public records requests to some 219 public universities and colleges, asking them what words they block on their Facebook pages and who they block on Facebook and Twitter.

We’re still compiling the results of that survey, but wanted to highlight some of the few institutions — almost all of them responded — that stonewalled our simple request.

Chief among them was Michigan State University, which this month was awarded the Golden Padlock Award, a dishonor bestowed by the nonprofit Investigative Reporters and Editors to recognize the “most secretive U.S. agency or individual.”

This well-deserved recognition followed the university’s efforts to stonewall public records requests on matters far more serious than our request for Facebook blocklists, including records of athletes’ police records and the university’s response to the Larry Nassar abuse:

MSU was selected for this national honor for keeping widespread sexual assault scandals under tight wraps, including serial abuse by disgraced team doctor Larry Nassar and hundreds of student complaints against faculty, staff and students. Last year, the attorney general’s special counsel accused the university of trying to “stonewall” the Nassar investigation, saying MSU officials were disingenuous in their commitment to transparency by issuing misleading public statements and withholding key documents. That secrecy reached well beyond Nassar’s case.

Michigan State’s instinctive commitment to opacity leads it to make absurd excuses to avoid releasing public information. When we asked for records about the words Michigan State blocks on its Facebook page and who it blocks on Facebook and Twitter, MSU refused, invoking statutory exemptions for “security measures . . . relat[ing] to the ongoing security of the public,” records of “measures designed to protect the security or safety [or] confidentiality, integrity, or availability of information systems,” or records that would “identify . . . a person that may . . . become a victim of a cybersecurity incident. . .”

Of course, if telling people what words can’t be posted on a Facebook page is a security risk, then nearly 200 institutions would have jeopardized public safety and security by sharing their blacklists with us. Obviously that’s not the case: Telling people what can’t be posted doesn’t enable them to post those words. These are not blueprints to nuclear plants or the secret plans to defend against a military invasion by Canada.

But why cite public safety? Because that’s the tool Michigan’s legislature gave public agencies — one of the exemptions to the state’s open records law cited by MSU was adopted as a response to the Sept. 11 terrorist attacks — and an institution intent on secrecy will use or abuse any tool at its disposal.

Who could have guessed that a terrorism-related security measure would be invoked to shield public scrutiny of such highly-sensitive information as whether you can post the word “Nassar” on MSU’s Facebook page? (You can, for what it’s worth.) The argument against the measure was summed up nicely in a legislative analysis:

Some fear that opening up the types of information that may be exempted will provide unscrupulous officials with a way to hide information that rightfully should be open to the public. Will the possibility of terrorist acts provide an “excuse” to withhold information about new public works projects, the expenditure of public funds, and so forth? The potential for abuse should be seriously considered in any broadening of the exemptions to the Freedom of Information Act. In the end, policymakers must weigh the costs and benefits of competing values: living in a free, open society vs. increasing governmental power in order to increase public safety and security. Many would prefer to err on the side of caution, but there are others who would prefer to live in a society that favors openness.

When asked by journalists about “winning” the Golden Padlock, MSU declined to comment. When we appealed our FOIA denial to MSU’s new interim president, Satish Udpa, explaining why the university’s response was unjustifiable, we got the same result: Silence.