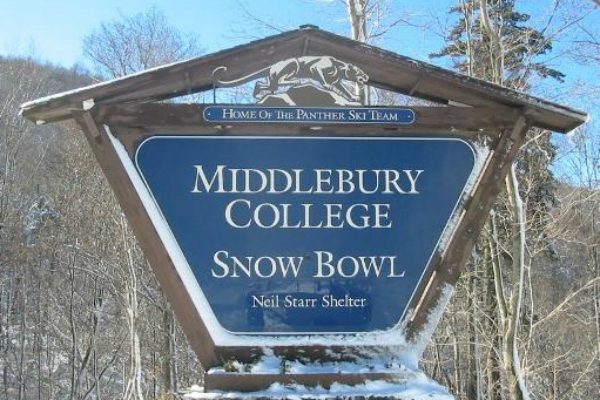 FIRE is looking more closely at several policies at Vermont’s Middlebury College following reports that a student was charged with — and later cleared of — violating the school’s rules on protest and behavior.

His apparent offense? Asking questions at a Middlebury-sponsored employment information session hosted by the CIA.

FIRE has reached out to both Middlebury and the student involved for more information.

The Middlebury Campus reports that Amitai Ben-Abba was taking graduate-level classes at the Arabic Middlebury Language School at Mills College in California this summer when he attended a July 29 employment information session held by two CIA recruiters.

“I listened respectfully when the CIA officers spoke,” Ben-Abba wrote in an August open letter to the Dean of Middlebury Language Schools, posted on his Facebook page. “I raised my hand during the Q&A section, awaited my turn, and when called upon, asked: ‘If accepted to work for the CIA, would we also be involved in destabilizing regimes, kidnapping people, torturing them and sending them to secret prisons around the world?’”

According to The Middlebury Campus, the resulting “heated discussion” between students at the event included commentary critical of the CIA and “its use of ‘enhanced interrogation techniques.’” The recruiters ultimately cut the planned two-hour event an hour short.

On August 7, according to Ben-Abba, Middlebury notified him that his comments may have violated the college’s Demonstrations and Protests Policy and Respectful Behavior Policy. 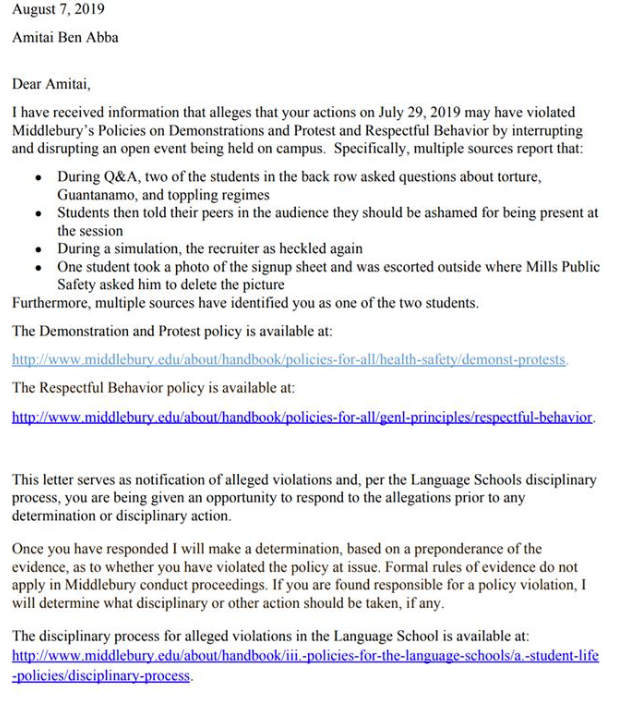 The following day, Ben-Abba wrote a response to the school, and the day after that, according to a post on Ben-Abba’s Facebook page, the college found Ben-Abba “not responsible for violating college policy.”

This determination, it seems, was arrived at without any kind of hearing.

Ben-Abba wrote that, despite being cleared, the incident has already had a chilling effect.

“The damage to free expression has already been made,” he wrote on Facebook. “[O]thers will think twice before openly expressing their views on the CIA, lest action be taken against them as well.”

While Middlebury reportedly reversed course quickly, the incident highlights the dangers of speech-restrictive policies like the ones under which Ben-Abba was charged.

Middlebury gets FIRE’s worst, “red light” rating in our Spotlight Database, in which we track speech codes at hundreds of institutions across the country. A red light rating means the institution has at least one policy that clearly and substantially restricts freedom of speech.

Notably, this case highlights the dangers of “yellow light” policies — those that may not be as obviously egregious on their face as red light policies, but are capable of being implemented to stifle campus speech. What happened at Middlebury is a prime illustration of a fact FIRE has hammered home time and again: These policies are routinely used to silence speech protected under First Amendment standards, and they do invite administrative abuse.

Anyone who wishes to stage a demonstration or protest at any event on Middlebury property should contact and arrange a meeting with Public Safety to discuss policy, demonstration-specific regulations, and safety issues.

This broad language appears to have been abused in Ben-Abba’s case, in which Middlebury seemed to suggest he staged a protest or demonstration by virtue of simply asking questions at a Q&A-style event.

The college’s policy on Respectful Behavior fares no better. The policy has long concerned FIRE due to its broad ban on “disrespectful behavior that is inconsistent with [Middlebury’s] shared values and expectations of behavior.” That language could cover almost any speech disfavored by a Middlebury administrator.

While Middlebury deserves some credit for correcting course quickly, these policies threaten students’ rights just by being on the books. Even charges later dropped can have lasting consequences. Students are frequently asked, for example, to report even disciplinary charges like the ones Ben-Abba allegedly incurred on applications for employment or graduate school.

FIRE maintains a Policy Reform department dedicated to working collaboratively with institutions like Middlebury to improve their policies. We hope Middlebury will revise its speech codes to affirm the commitments to free expression it already makes in official policy.