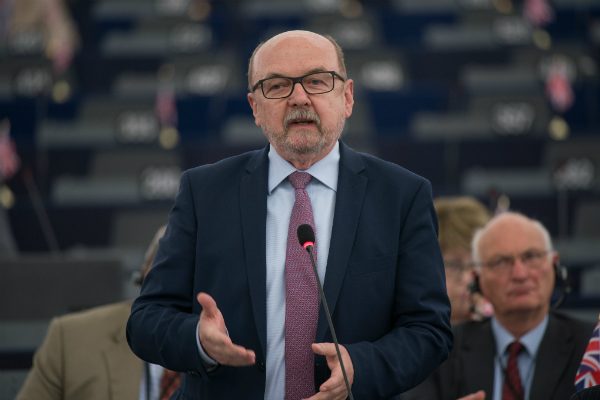 Middlebury College in Vermont has been hammered in the press over its recent administrative disinvitation of Polish scholar and politician Ryszard Legutko just hours before he was set to speak. (He did ultimately speak to one political science class when a student in the class asked the professor if Legutko could address their class. The faculty member agreed after receiving the unanimous assent of his students.)

The Student Government Association at Middlebury College is rightly concerned about the bad press for Middlebury and appears to be fed up with being ignored by the administration. In an attempt to address this, the SGA emailed the college community this week with 13 of what it called “proposals for community healing.”

Unfortunately, several of those proposals are not just unlikely to advance “community healing,” but actually demand illiberal restrictions on expression, compromise academic freedom, and, in two cases, seem plainly intended to intimidate those who might dare to dissent from the campus orthodoxy.

Ideological vetting of outside speakers and intimidation of their faculty hosts

Proposal number 3 from the SGA reads as follows:

This provision is obviously aimed at addressing the perceived risk that someone like Ryszard Legutko, or Charles Murray, may at some point in the future be invited to speak at Middlebury College. What would such a “due diligence form” ask? The SGA says it would be questions aimed to see whether a speaker aligns with Middlebury’s community standards.

Middlebury’s official Community Standards don’t make much sense when applied to outside speakers, which is no surprise as they state at the very beginning that they are meant for students. But it’s not at all clear how Legutko or Murray would fail to meet them. Given the accusations made by some Middlebury students, one might assume that the SGA means the last bullet point of the standards, which say that Middlebury College should be “fostering a diverse and inclusive community committed to civility, open-mindedness and finding common ground,” to be the sticking point in terms of inviting speakers like Murray or Legutko.

But even if one were comfortable with giving such terms as “diverse and inclusive” an explicit political definition — which students surely should not be — such a determination would run right into the buzzsaw of the second part of that clause, which asks for civility, open-mindedness, and finding common ground. There is just no way to intelligibly use a policy requiring “open-mindedness” to tell a speaker that he or she is forbidden to come to campus because of their views.

Other standards are no more realistic when applied to outside speakers: How much is a professor or student inviting a speaker really expected to know about whether the speaker shows “honesty in all decisions and actions,” or promotes “healthy, safe and balanced lifestyles?”

All this is done in the name of “removing the burden [emphasis added] of researching speakers from the student body,” which is absurd and impractical. If members of the  student body wish to protest a speaker, it can only be described as silly to expect the people hosting the speaker to do the job of determining what those protesting their decision should be angry about.

The subsection of this proposal is made worse by requiring a list of all speakers invited by departments to be made public at least a month in advance so that there can be “input” from the student community. This appears to be another requirement to make things easier for would-be censors, and will also quite obviously serve as a deterrent against inviting any speakers who might express unpopular views.

Given the hospitalization of Professor Alison Stanger when she was attacked by a mob for the “offense” of moderating the Charles Murray talk at Middlebury in 2017, there’s no question what will be on faculty members’ minds when they contemplate their choice of speakers to put on that list. This is so obvious, in fact, that it’s unlikely that the SGA did not realize it when writing this proposal, which leads to its own disturbing conclusions.

Comparatively, proposal 4 “merely” appears to be an attack on academic freedom and the proper role of faculty members.

Administrators cannot simply order faculty members to give students class credit for work that is not academic in nature, or which does not meet their standards, without interfering with their freedom to teach. (It’s unlikely that higher education’s accreditors would approve of it either.)

McCarthyism is making a real comeback in New England, with Middlebury’s SGA picking up the baton from Harvard and deciding it needs a “wrongthink” blacklist of its own.

While pitched as a way to help students “make informed decisions on courses and interactions,” a publicly available list of faculty members and other employees who chose not to participate in bias training is an obvious tool for intimidation, shaming, and social media mobbing. It’s very difficult to believe that this was not intentional.

The fact that the bias training is to be “recurrent” adds insult to injury, as those who simply don’t feel their time is best spent attending repetitive bias training sessions will also find themselves on this list of those who will most certainly be portrayed as insensitive or bigoted.

Further, even the stated reason for this requirement rests on the assumption that the bias training will be effective in actually reducing bias in those who have it — an assumption that is itself extremely questionable.

And what will the session be like? While it’s certainly possible for a bias training session to represent an honest effort to reduce bias through reasoned discussion and awareness-raising, the SGA proposal shows little sign that that is what is intended.

While the importance of using preferred gender pronouns is most certainly an area of wide disagreement in our nation, the SGA specifically declares that this bias training shall not just teach faculty members that using such pronouns is important, but also inform them that asking about students’ preferred pronouns and then “respecting” them will be required. What will happen to them if they don’t? (And, by the way, what do you do when a student chooses to go with “His Majesty?”)

Students at Middlebury or anywhere else are under no obligations to make their requests of administrators respectful of free speech, free thought, academic freedom, or anything else FIRE cares about. They are even free to demand things that are illegal, unconstitutional, or unrealistic — and FIRE would defend their right to make such demands, even if we did not support the demands themselves.

Official student government bodies, however, have greater responsibilities. They may not use the power delegated to them by the college to engage in unlawful discrimination or other activities, and have at the very least a moral responsibility not to demand changes that would undermine the very nature and purpose of a liberal education. It is highly unfortunate that in their email to the entire Middlebury community, the Student Government Association has nevertheless chosen to do so.

We strongly urge the SGA to reconsider these ill-advised proposals before still more damage is done not just to Middlebury’s reputation, but to the education of all of its students.