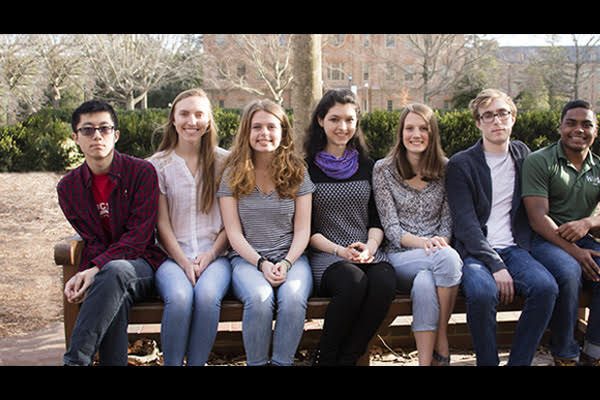 Most of them have never been in trouble before.

Undergraduates at The College of William & Mary are routinely among the premier students in the nation. The 300-year-old university, set on 1,200 idyllic acres in Williamsburg, Virginia, has been called a “Public Ivy,” and it only admits about a third of the students who apply. But on any college campus in any given year, a handful of unfortunate undergrads suddenly find themselves on the wrong side of their university’s disciplinary process. Many of those students — especially the ones with squeaky clean histories — have no idea what to do next.

“Typically, when a student comes to us, they’re like a deer in headlights,” said Lizzy Crotty, a member of W&M’s Conduct and Honor Advisor Program, which advocates for students facing disciplinary charges. Crotty, a junior, is one of about 15 members of the group, known campus-wide by their friendly-sounding acronym — CHAPs.

Crotty, a CHAP for the past three years, said students accused of violating either W&M’s Honor Code or its Conduct Code are almost always scared and confused.

“They don’t even know what first steps to take.”

But she and the other CHAPs do.

“We’re there,” said Anneliese Brei, a sophomore who joined CHAP last semester. “We let them know we’re going to help them. We help them prepare, and help them decide what kind of trial they want, and try to help them represent themselves as accurately as possible. We’re just there to support them from that point on.”

Bailey Hall, a senior and CHAP’s chair, said support is a major part of the advocacy process.

“When all this is going on, it’s so overwhelming,” Hall said, noting that CHAPs sign a strict confidentiality agreement that help students feel comfortable enough to really open up.

“I would say we’re halfway between a therapist and a lawyer.”

“Any consequences in college are very serious. Anything on your record is serious. Getting suspended is a huge deal.”

In that dual role, CHAPs can also help panicked undergrads, most facing the prospect of serious discipline by their school for the first time, make clear-headed choices — and avoid making the problem worse.

“There are some students who — they’re freaking out,” Hall said. “They think they should lie to the Honor Council. And that’s not a good idea.

“We can work through that with them, so they can figure out how to tell the truth before they get to the Honor Council. We can help them understand the process, figure out their statements, not ramble, give them support if they’re getting emotional during their testimony.”

Together, CHAPs and the students who need them develop an action plan for “present[ing] what happened in the best possible way.”

Students facing discipline are often referred to CHAPs by an administrator, or they can contact a CHAP independently through the group’s university-hosted web page.

Like at any university, the kinds of disciplinary accusations a William & Mary student might face run the gamut. There are Conduct Code violations, encompassing typical student handbook fare: alcohol and drug use, use of facilities, and hazing, to name just a few. There’s also an Honor Code, which covers lying, cheating, and stealing. William & Mary students personally administer the mandatory “Honor Pledge” (which dates back to 1736) to all incoming freshmen:

As a member of the William & Mary community, I pledge on my honor not to lie, cheat, or steal, either in my academic or personal life. I understand that such acts violate the Honor Code and undermine the community of trust, of which we are all stewards.

Whether the charges are honor- or conduct-related, CHAPs stand by accused students through all allegations of wrongdoing. Cheating, CHAPs say, is among the most common. Then there are a range of other kinds of charges CHAPs can handle. On one end of the seriousness spectrum are sexual assault cases. (Title IX cases require a trained adviser to assist.) There are oddities, too, like the student brought before the Conduct Council for accidentally breaking a table.

But a student found responsible for any kind of disciplinary charge should be thinking about its impact on their future, including prospects for graduate school and jobs.

“Any consequences in college are very serious,” Hall said. “Anything on your record is serious. Getting suspended is a huge deal, financially and otherwise.”

“I just want to help these students so that they don’t feel like these incidents have ruined the rest of their lives. That they can get over them. That they know they’re going to get a fair trial and everything will work out.”

When it comes to doling out those consequences, William & Mary is also notable because it empowers students to take the lead.

While the conduct system is overseen by the Dean of Students Office, both the school’s Honor Council and Conduct Council are staffed primarily by undergraduates, and most disciplinary decisions fall solely to those councils.

Anneliese Brei, one of the newest CHAPs, said she almost joined one of them — but saw an even better opportunity as a student advocate.

“For me,” Brei said, “I just want to help these students so that they don’t feel like these incidents have ruined the rest of their lives. That they can get over them. That they know they’re going to get a fair trial and everything will work out.”

“Pretty much everyone,” she adds, “is a good person.”

Hall, the CHAP chair, said the group often finds disciplinary issues to be a symptom of a larger problem for students in trouble.

“Usually when students break the rules, 95% of the time there’s something else going on. Like some problem at home or some mental health issue.”

Hall said the student-led discipline process, free from overreach by out-of-touch administrators and unconstrained by mandatory sanctions, provides opportunities for healing and growth that go far beyond a single wrongdoing.

“A lot of times the Honor Council is able to address the root cause and find solutions,” she said. “Maybe [the student broke the rules] because they have an undiagnosed anxiety disorder, and they can go to counseling and work through it. And that’ll make sure they never do this again.”

Believing students deserve the benefit of the doubt and a chance at redemption, Hall said, is a mentality that flows through the entire conduct system. CHAPs say it also makes the process fairer: Students who deserve punishment get it. Those who plead extenuating circumstances have the opportunity to have them considered.

“I think because it’s student-run, the students have a little more understanding of what’s normal and what’s not,” Hall said. “They’re students too, so they can think, ‘This person really shouldn’t have cheated on this test. They say they were overwhelmed by finals, but we’re all overwhelmed. We don’t all cheat. This is really serious.’ Versus, while a student is going through something really extraordinary, something that most people don’t experience, they might need to [get] a break.”

As a CHAP, the process has opened Hall’s eyes to the wide range of student experiences.

“My biggest takeaway is you never know what’s going on in someone’s life. It’s really hard to judge someone if they’re going through something that you just can’t relate to since you’ve never been through it.”

CHAPs say through the advocacy process, they’ve seen many students learn and grow. For some, the process is transformative.

“I’ve seen students make really great strides to change and to be a complete rule-follower,” Hall said. “They want to make sure they never get in trouble again.”

And CHAPs can be transformed, too.

Hall said being a CHAP taught her important lessons about what it means to fully advocate for students, which includes being a policy watchdog — and improving bad ones before more students get in trouble.

“When I’m in a hearing and I see something that I think is unfair, I know I might not be able to help that student fix it because it is a policy. But I know that that policy could and should be changed.”

She and CHAP’s vice-chair now have bi-weekly meetings with the Dean of Students office to advocate for making the conduct process fairer.

And administrators are listening.

For example, Hall said she recently flagged an issue where students accused of low-level violations in residence halls were being led to an alternative resolution process that administrators pitched as being faster and easier than going through the Conduct Council.

But those administrators failed to mention that the process was also riskier.

“Students could meet with an administrator, sign a statement of facts and it would be done,” Hall said. “But an important part of that process is, once you sign that statement of facts, you [almost never] have grounds to appeal your case. So students were kind of signing their rights away to these administrators and not understanding that.”

Many of those students ended up saddled with harsher punishments than they expected, or hastily-signed statements that ended up being factually incorrect, but they had no way to appeal or fix the mistake.

“They didn’t even know about CHAP,” Hall said.

“Now we’re working with the Dean of Students to educate administrators who handle that process to make it really clear to students that they can, and should, have a CHAP.”

All CHAPs learn the ins and outs of the disciplinary system. Lizzy Crotty says having this level of responsibility has taught her life lessons too.

“Having a student-run honor process, it is a lot of trust to other students. But you realize the amount of trust that has been given to you, and you rise up to the expectations.”

“During every hearing or process,” Crotty said, “everyone’s very respectful. And very, very professional. Because we understand that what’s going on can change someone’s life. Drastically.”

CHAP’s widespread popularity on William & Mary’s campus — from the students they advocate for, to administrators — makes the program stand out.

Molly Nocheck, FIRE’s Director of Campus Outreach, works directly with dozens of Student Defenders groups like CHAP on campuses across the country. But William & Mary’s program, she said, stands out as “a model Student Defenders organization.”

“The group has done a spectacular job cultivating positive relationships with both students and administrators. Their members are passionate, they fight tirelessly to improve student rights at William & Mary, and they provide an essential service to their campus community.”

CHAPs want students at other universities to know that they can help their peers navigate these processes, too. They can join an existing Student Defenders group, or create a new one.

“If there is a need on your campus, definitely try to have an organization that will fill the need,” Crotty said.

The payoff is worth it.

“I’ve seen firsthand the help that we can give to individual students. Just last semester, I had a case going through the process right as the semester was about to end. That stress on top of finals was a lot for this student.

“At the end, after it was all over, she just looked at me and said, ‘Thank you. I could not have done this without someone who was walking through it with me at all steps of the process.’

“So that’s the reward I work towards. Just to have them look at you and say:

‘This made all the difference.’”

Interested in creating or joining a Student Defenders group on your campus? FIRE can help!

Watch the video above, then go to FIRE’s Student Defenders page for all the information and resources you need to get involved.

Don’t see what you’re looking for? Contact us anytime at studentdefenders@thefire.org.

Schools:  The College of William & Mary