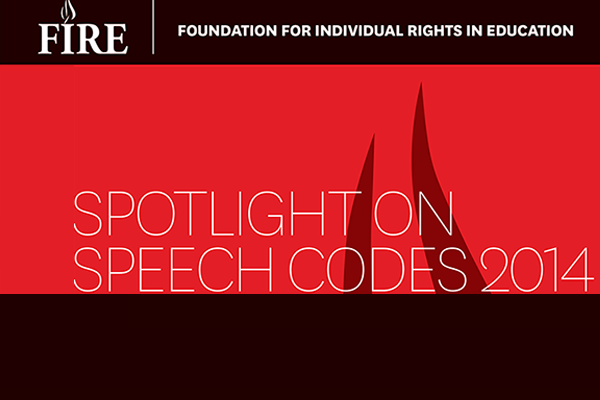 PHILADELPHIA, January 17, 2014—The Foundation for Individual Rights in Education (FIRE) released its 2014 report on campus speech codes today, finding that 59% of the 427 colleges and universities analyzed maintain policies that seriously infringe upon students’ speech rights. For the sixth consecutive year, however, this percentage has dropped. Despite this progress, confusing signals from the federal government have created an unacceptable tension between universities’ twin obligations to protect free speech and to prevent discriminatory harassment.

Major findings from Spotlight on Speech Codes 2014: The State of Free Speech on Our Nation’s Campuses include:

Spotlight on Speech Codes 2014 reports on policies at more than 400 of America’s largest and most prestigious colleges and universities. This year’s report shows that too many universities, including public universities bound by the First Amendment, continue to place substantial restrictions on students’ right to free speech. For example:

“We are heartened to see another drop in the percentage of campuses maintaining restrictive speech codes,” FIRE’s Director of Policy Research Samantha Harris said. “There is much more work to be done, however, particularly in light of the confusing messages coming from the federal government about the relationship between harassment and free speech. For starters, the Department of Education needs to make clear to universities, once and for all, that prohibiting harassment does not mean restricting protected speech.”

All of the policies cited in the report are accessible online in FIRE’s searchable Spotlight database. Individuals interested in drawing attention to their institutions’ policies can easily do so by adding FIRE’s Speech Code Widget to their blog or website. Simple instructions for adding the widget are located here.

UPDATE: The Wall Street Journal has highlighted the report in a staff editorial (subscription required).