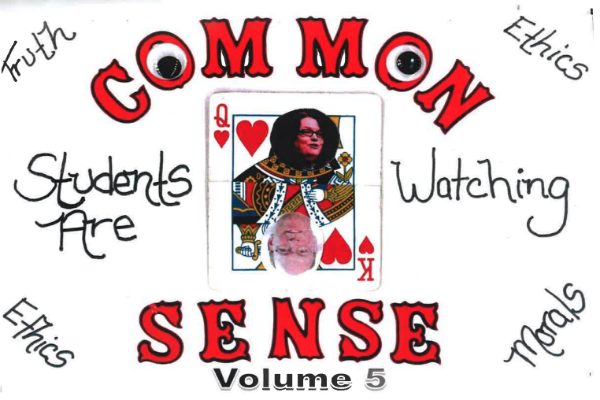 On May 7, Jake Gutowitz was in the midst of completing final exams in preparation for his graduation from Long Island University Post later that week. Then, he received a disconcerting email — he was under investigation for alleged possession and distribution of forbidden flyers. According to Nicole Thomas, Associate Director of LIU Promise (an office in the Student Life department), the flyers contradicted the LIU Ethos Statement’s “respect for authority” provision and were a potential violation of the LIU Post Code of Conduct. Gutowitz had two business days to schedule a meeting with Thomas to discuss the allegations.

Gutowitz, however, has never had anything to do with creating the flyers.

Gutowitz knew about the flyers, which had been appearing on campus throughout the school year. They were labeled “Common Sense,” à la Thomas Paine, and contained parodies and poems criticizing LIU Post and its administrators, particularly President Kimberly Cline. The flyers aired the anonymous author’s grievances about how the administration runs the university, including complaints about mold in campus buildings, bloated administrative salaries, restrictions on freedom of expression, and illness caused by campus food.

It was no secret that President Cline and the LIU Post administration were not fans of the Common Sense flyers — LIU spokesman Gordon Tepper went on record calling the flyers “sexist trash” that “speak[] to a disturbed individual.”

Gutowitz, however, has never had anything to do with creating the flyers.

He had seen them around campus, and, as a student senator, he examined copies at a student government meeting where the flyers were a topic of discussion. However — and as he assured administrators during his conduct meeting — he had no problem voicing his concerns with LIU Post without anonymity. During his time at LIU Post, Gutowitz was publicly outspoken about his concerns with the campus administration.

At the meeting, Thomas and Assistant Dean of Students Jean Anne Smith explained that, because the LIU Post Department of Public Safety had received a report that Gutowitz was posting Common Sense flyers on campus, they had to call him in for a meeting as part of the conduct process. Not only was this report from an “anonymous student known to Public Safety,” the alleged incident had also occurred in December 2018, some five months earlier. At the conclusion of the meeting, Thomas indicated Gutowitz would receive a letter informing him whether or not he was found responsible for violating the Ethos Statement and Code of Conduct.

Gutowitz went on to graduate and leave LIU Post, but he never received a formal resolution concerning the allegations against him. Earlier this year, FIRE wrote a letter to LIU Post voicing our concerns about their decision to investigate Gutowitz.

There are several reasons why LIU Post’s investigation of Gutowitz represents a threat to free expression on campus.

First, the allegations against Gutowitz were unfounded and concerned conduct that occurred months before he was accused. LIU Post’s choice to investigate this alleged conduct only months later, and when nearing the eve of his graduation, had a serious chilling effect on his speech. Gutowitz himself was rightly concerned the investigation could affect his ability to graduate.

Administrators obviously found some of the flyers offensive, but punishing subjectively offensive expression is antithetical to LIU Post’s promises of free expression.

Second, although Gutowitz himself was not the author of the Common Sense flyers, they are protected expression under LIU Post’s promise to “support[] the rights … to free speech and peaceful assembly.” Administrators obviously found some of the flyers offensive, but punishing subjectively offensive expression is antithetical to LIU Post’s promises of free expression. It’s particularly concerning to imagine a campus where those granted the power to determine whether expression is permissible choose to stifle expression that is critical of themselves—an issue we raised in our letter.

Most likely lacking any good answers to these concerns, LIU Post never answered our letter.

These abuses are becoming a pattern at LIU Post. This isn’t the first time FIRE has called on LIU Post to cease this kind of chilling investigation into protected student expression. Last year, we wrote to President Cline to express our concern about a similar situation. LIU Post student Anand Venigalla was summoned to an investigatory meeting concerning non-threatening social media posts (he was holding unloaded guns at a Cabela’s event) and academic work. Although he was not charged with a violation of the Code of Conduct, Venigalla left the meeting unsure about whether similar expression could lead to future discipline.

FIRE wrote again after LIU Post’s response brushed off Venigalla’s reasonable concerns about whether he was potentially subject to discipline as a result of expressing himself. Again, we never heard back.

Although Gutowitz has graduated, FIRE remains concerned about the apparent pattern of investigations into protected expression at LIU Post, and administrators’ total lack of answers as to what’s going on. FIRE hopes that this pattern will not continue, but if it does, we will be watching.

You can read FIRE’s letter to LIU Post in full below: