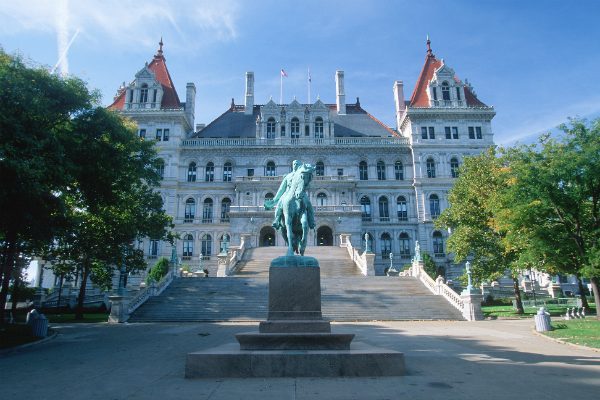 In a perennial effort to infringe on students’ First Amendment rights, a bill has been introduced in the New York State Senate that, if adopted, would bar funding to any student organization that “directly or indirectly promotes, encourages, or permits” either “hate speech” or boycotts concerning “commercial, social or political relations” with any nation “allied” with the United States.

The bill, introduced by Sen. Robert G. Ortt, marks the fourth year in a row the measure has been introduced. The previous three attempts managed to pass New York’s Senate — attracting broad, bipartisan support — only to die in the Assembly.

As we’ve said before in greater detail, the bill is irredeemably unconstitutional. Distribution of student fees must be viewpoint-neutral. Expressing support for or encouraging others to engage in boycotts is protected by the First Amendment, and restricting funding to student groups that support such boycotts is viewpoint-discriminatory. And, of course, the notion that there is a “hate speech” exception to the First Amendment has been repeatedly rejected by the Supreme Court, most recently in the unanimously-decided Matal v. Tam (2017).

The bill is also unwieldy, barring student groups from boycotting particular nations, some of which are named in the bill and others included by reference to several treaties. Depending on how you interpret which states are members of those treaties — Pakistan was a signatory of the Southeast Asia Treaty of 1954 but later withdrew from the now-defunct Southeast Asia Treaty Organization, for example — this is what a map of the nations that would be protected against calls for boycotts might look like: 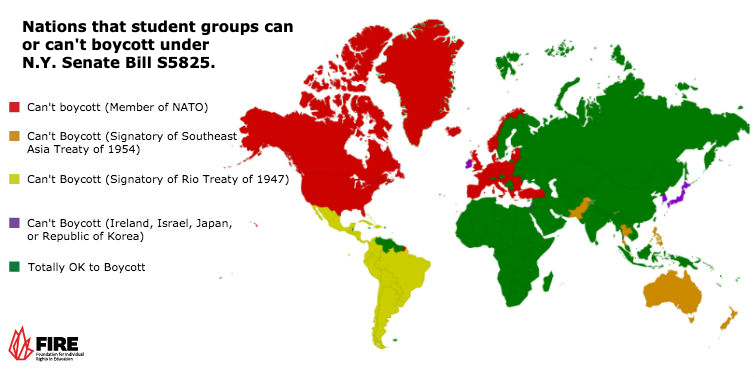 This proposal differs from previous iterations only in that it proffers a “justification,” arguing that the law is necessary to prevent calls to boycott Israel:

Recent events have highlighted the need to extend current law to include Student organizations that receive public funding. Since [an existing law enforcing a federal statute concerning boycotts led by foreign nations] was enacted, a new movement has arisen, commonly known as BDS (Boycott, Divest and Sanctions), whereby questionably motivated organizations, engage in, and promote, discriminatory policies against American allied nations. This behavior not only hurts the state, its interests and its citizens, but seeks to advance anti-Semitic, anti-freedom and anti-capitalist principles.

Several other states, including Illinois, New Jersey and South Carolina, have also taken action to address this harmful activity.  Like New York, they have extended their laws to prevent their states from becoming unwilling participants in these unseemly activities through the misguided actions of student organizations that receive public funding. Accordingly, like those other states, this bill would not abridge any element of free speech, but would merely prevent the State of New York from being dragged into a discriminatory agenda directed by those who seek to advance principles that are antithetical to our state, its constitution and its citizens.

The measures from other states are either irrelevant to student speech (New Jersey’s law, for example, concerns pension funds) or are unconstitutional, such as South Carolina’s Anti-Semitism Awareness Act, which invokes a definition of anti-Semitism that includes criticism of the State of Israel.

This bill, like those that came before it, is destined to die — either on the floor of one of New York’s legislative houses or at the hands of any judge with even a passing familiarity with the First Amendment. Perhaps New York’s legislators should try their hand at something other than this unconstitutional legislative agenda.