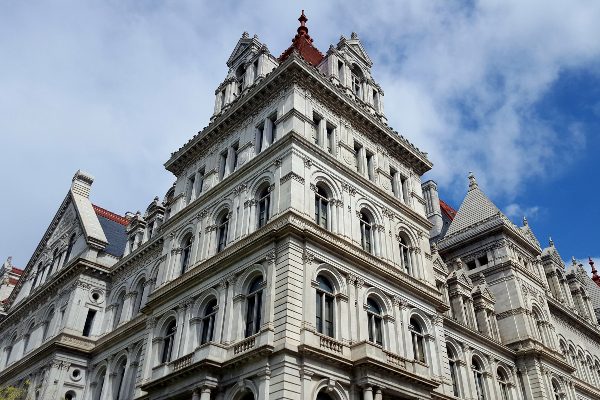 As naturally as autumn brings falling leaves and the spring brings blooming flowers, each new legislative session in New York sees the introduction of a wildly unconstitutional bill targeting student organizations at the state’s public universities and colleges. For the sixth year in a row, New York’s State Senate will consider a bill targeting student organizations due to their protected speech.

If adopted, Senate Bill S3712 would strip funding of any student organization that “permits” either “hate speech” or encourages boycotts of particular allies of the United States, with an avowed purpose of prohibiting groups from “advocating for the Boycott, Divestment and Sanctions (BDS) of Israel[.]”

Our evaluation of the proposal remains unchanged from last year:

As we’ve said before in greater detail, the bill is irredeemably unconstitutional. Distribution of student fees must be viewpoint-neutral. Expressing support for or encouraging others to engage in boycotts is protected by the First Amendment, and restricting funding to student groups that support such boycotts is viewpoint-discriminatory. And, of course, the notion that there is a “hate speech” exception to the First Amendment has been repeatedly rejected by the Supreme Court, most recently in the unanimously-decided Matal v. Tam (2017).

The bill is also unwieldy, barring student groups from boycotting particular nations, some of which are named in the bill and others included by reference to several treaties. Depending on how you interpret which states are members of those treaties[.]

That leaves us with this map — updated for 2021 — which tries to parse out which countries a student organization could boycott (or promote a boycott of) without fear of losing funding. This map assumes that any state that signed the Southeast Asia Collective Defense Treaty of 1954 qualifies as an ally, even though most of its participants abandoned the project in the early 1970s. It also assumes that states that were signatories of the Rio Treaty of 1947, but later withdrew, are not considered “signatories,” and that Cuba, which the United States has said remains a party, continues to be a signatory, even though its participation was suspended in 1962. (The New York bill specifically excludes Venezuela, even though it was a signatory to the treaty.)

With those caveats, the updated map: 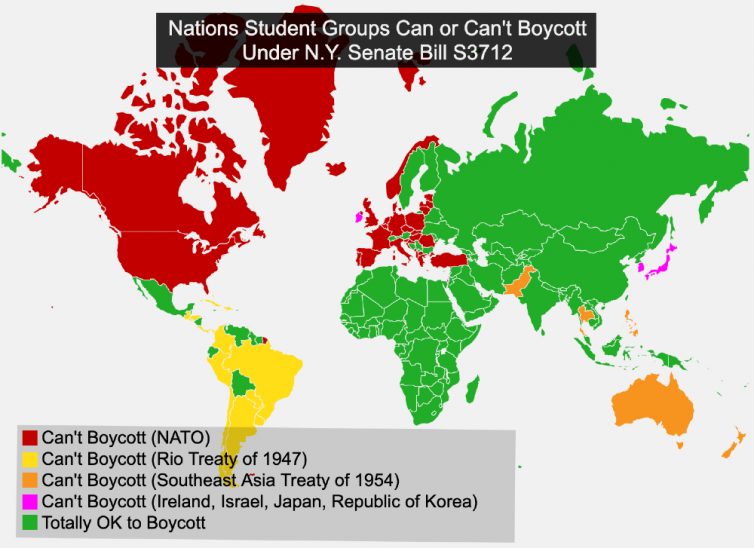 The bill’s primary focus, however, is Israel. The “purpose or general idea” of the bill highlights groups “advocating for the Boycott, Divestment and Sanctions (BDS) of Israel” as its intended target, and the bill’s “justification” warns that “a new movement has arisen, commonly known as BDS,” under which “questionably motivated organizations, engage in, and promote, discriminatory policies against American allied nations.” Its author also points out that other states have enacted statutes targeting BDS proponents.

It’s not clear why the authors of this bill continue to put forward legislation that cannot possibly achieve its stated objective due to its patent unconstitutionality were it to pass. As my colleague Aaron Terr wrote in describing the recent decision of the United States Court of Appeals for the Eighth Circuit striking down a statute with similar provisions:

Proponents of anti-BDS statutes should take note of their poor record in court. The Eighth Circuit’s decision follows similar rulings over the past few years by federal district courts in Texas, Kansas, and Arizona, invalidating anti-BDS statutes on First Amendment grounds.

The New York bill presents the same problems as those in the Eighth Circuit case, which struck down language regulating speech in support of BDS. The New York proposal implicates pure speech, reaching any group that “indirectly promotes” or “encourages” boycotts or “hate speech.” Thus, even a group that holds a debate between a BDS proponent and opponent would risk losing funding.

The various iterations of the bill — now sponsored by Senate Minority Leader Robert Ortt — have been a bipartisan effort. It previously passed the Republican-controlled state senate with strong Democratic support in 2016 (by a vote of 48-14), 2017 (48-12), and 2018 (48-12), but failed to find support in the Assembly. While the bill has never reached the governor’s desk, its origins lie there: the first iteration of the bill was based on language from a “blacklist” created at the direction of Governor Andrew Cuomo that similarly applied to anyone who “promote[s] others to engage in” boycotts of Israel. (Witness, again, how subjective limits on speech, like “hate speech,” will be adapted to impose limits on dissenting political expression.)

FIRE takes no position on the BDS movement, except to the extent that an academic boycott would violate academic freedom (by, for example, preventing students and faculty from engaging with Israeli scholars or institutions). However, we support the rights of students and faculty to voice any opinion on BDS, whether in support or opposition, as advocacy for or against BDS is speech protected by the First Amendment.

With luck, this bill will join its previous iterations in the legislative graveyard.